Grin and bear it: The crypto market is still not pretty viewing

DOMINIC FRISBY: "The major falls of the last two weeks enjoyed the respite of a bounce; but the bounce, let’s face it, was anaemic. It was the bounce of a ball that is deflated"

What was ugly out there last week has not got any prettier.

The major falls of the last two weeks enjoyed the respite of a bounce; but the bounce, let’s face it, was anaemic. It was the bounce of a ball that is deflated.

Ripple, now by some margin the second largest coin by market cap, went from 32c to 40c. It now sits at 35c. Interestingly, it’s the only major coin that’s above its September lows. On a relative basis, it’s the strongest of the crypto coins. Go figure.

I’m citing these levels because these mark the new ranges we are in.

My prognosis for what happens next is that we will meander around these levels. Volatility will come down. The moving averages will catch up with the price. Things will settle. Sentiment may even improve. And then we get the next big move.

Let’s start with a one-year chart of Bitcoin. You can see in the top panel that sloping blue line. The 55-day simple moving average (55DMA) has tracked Bitcoin all the way down in this bear market. Bitcoin makes a big move, pulls away from it, then the two come back to each other. With the capitulation of a fortnight ago, quite a gap has opened up between the two, which, over the next 30 days or so, will likely close. That would be a combination of Bitcoin rallying a little perhaps, and the 55DMA coming down to current levels. 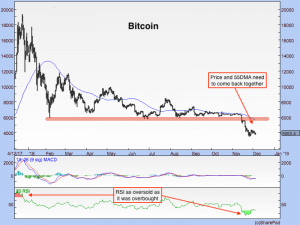 I would make two other observations about the price action. First, you can see the pale red band I have drawn just below the $6,000 price level. This was strong support for many months. It will prove strong resistance now it has given way. But I rather think that price level will act like a magnet. At some stage, Bitcoin is going to want to come back and retest it.

It wouldn’t surprise me to see that level retested before February – but it’s not something I am betting on.

The other observation I would make is that RSI – relative strength – was as oversold last week as it was overbought when Bitcoin made its high at $20,000. I regard RSI as a secondary indicator – I really would not set too much store by it. But last week’s reading was the sort of climactic level at which important lows are made.

My view is that it won’t be enough, however. My longer-term projections for the Bitcoin price remain as per the log chart I posted last week. Here’s an update. 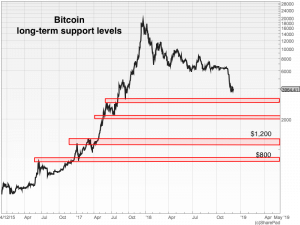 These boxes are based around pivotal price points on the way up – points of support and resistance. There is no great science to them. Yet such simple techniques can work surprisingly well.

Here’s a chart – courtesy of CoinMarketCap – that I was considering this morning. It shows the market share of the major cryptocurrencies. 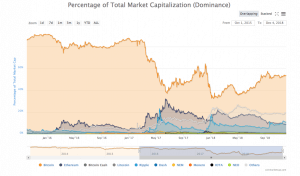 The orange line maps out Bitcoin, the black line Ethereum, the blue line Ripple, and so on. The other major coins have so little market share as to be almost invisible on this chart, so we can ignore them. The silver line maps out “others” – the coins which aren’t listed above.

(We can expect, by the way, the relative market cap of the stable coins to increase as the cryptos fall.)

The observation I wish to make is about Bitcoin itself.

There are, according to CoinMarketCap, 2,066 different cryptocurrencies. I’m not sure in the future we are going to need anything like that many different coins to transact (security coins are a different matter) over the internet. The UN currently recognizes 180 national currencies, but for transactional purposes over the internet, we will probably end up with, say, five – I’m guessing, of course.

Take credit card companies. We only have Visa, Mastercard, and American Express (and Discover). We could probably do with a few more to keep the others on their toes, but we certainly don’t need 2,000.

The big question for crypto investors is which of the coins are going to be the default internet cash systems. Based on current networks, one of them will inevitably be Bitcoin.

Each of the other coins have arguments in their favour. You need a privacy coin. Monero has the biggest usage currently, but perhaps Monero’s privacy features can eventually be added to Bitcoin somehow. We need Litecoin as a developmental feature for Bitcoin, but do we actually need Litecoin for transactions? And so on.

But what tends to happen in bull markets is that the small caps outperform the large caps. In bear markets, the opposite applies. The same applies in crypto. As the bull market unfolded, Bitcoin’s market share (based on market cap) fell from over 90% in late 2015 to around 33% by January of this year.

Since January, however, Bitcoin’s market share has been steadily growing. It now sits at around 53% (though it was 58% in September). It has flattened out a little.

Similar to how Ethereum was the vehicle for ICOs, so it rallied as ICO money came into the market and was then sold off as companies liquidated their funds, so has Bitcoin been the vehicle by which most fiat comes in and out of crypto. That is changing as exchanges open up trading of other cryptos for fiat.

But for now at least, Bitcoin remains the bedrock of crypto. In the 19th century, the Bank of England used to issue paper money based around the amount of gold it had in its vaults. Research by economist Thomas Paterson of Gold Made Simple has shown that during periods of economic expansion, money creation was such that the pound was effectively only about 10% backed by gold, but during periods of economic contraction, it became about 50% backed. The typical ratio was about 25% backing. (It was, effectively, a sort of fractional reserve gold standard.)

Given that crypto is in a period of contraction, I am wondering if the Bitcoin share of the crypto market cap needs to go back to around 80%. If you’d asked me that question before, I’d have said definitely. That was the trend. But the recent levelling off makes me more doubtful, particularly as there has been so much selling.

But I think what is happening is that many are selling Bitcoin and getting out of crypto altogether, rather than just trading altcoins for the relative stability of Bitcoin.

Dominic Frisby is author of the first (and best, obviously) book on Bitcoin from a recognised publisher, Bitcoin: the Future of Money?, available from all good bookshops, and a couple of rubbish ones too. Dominic is director of Cypherpunk Holdings (CSE:HODL), a company set up to invest in privacy-related technologies. Follow Dominic @dominicfrisby. You can also read more of Dominic’s articles for Coin Rivet here.

Blockchain training: Which organisations would benefit?

When your coins are dropping in value and you feel low, there are always funny cryptocurrency memes to cheer you up. Here are some of our favourites.

Bitcoin's bullish turn has surprised some and was expected by others. But why has the price recovered and is it sustainable?

Last week, Coin Rivet flew over to Malta for the biannual AI and Blockchain Summit. Here are some of the key highlights, with plenty more to come!

As BTC rose in April we saw more attempts of FUD reappearing from old topics that are continually used to frighten the market.