Have we seen capitulation yet? Crypto bloodbath continues as altcoin bubble pops

The SEC's decision to delay Bitcoin's ETF until February resulted in a sell-off across the cryptocurrency market on Thursday evening, with altcoins suffering the brunt of the drop

The entire cryptocurrency market cap faces the daunting possibility of dropping below $100 billion before the year is over, with several altcoins falling well below their previous yearly lows.

Even Bitcoin itself wasn’t immune to the sell pressure, falling more than 10% to $3,300. But it was the altcoins that really suffered, with many facing double-digit moves to the downside.

Is this capitulation? Or just a continuation of trend?

Many in the cryptocurrency space are contemplating whether the recent price action was indicative of a capitulation phase, which usually acts as a precursor to a reversal and a subsequent bull market, but it seems like the market still has the potential to continue with the bloodbath.

Bitcoin’s breakdown from the $6,150 level of support in November was significant; it indicated that a change in behaviour was apparent and that a new sub-trend within the 11-month bear market was being created.

The market remains in a turbulent downtrend, worsened by the narrative of increased regulation and ETF rejections. A capitulation low usually gives traders a small window to catch the bottom. In this case, we are yet to see behaviour indicative of a capitulation or a reversal, as price has slowly and gradually slumped instead of a rapid move to the downside.

A capitulation low is something that catches even the most seasoned traders off guard. There is an argument that in February 2017 we saw a moment like this when Bitcoin crashed from its $20,000 all-time high to just $5,800 in under a month. Many were claiming that the bubble had officially popped, but instead Bitcoin rallied back up to $11,800 before creating a double top. 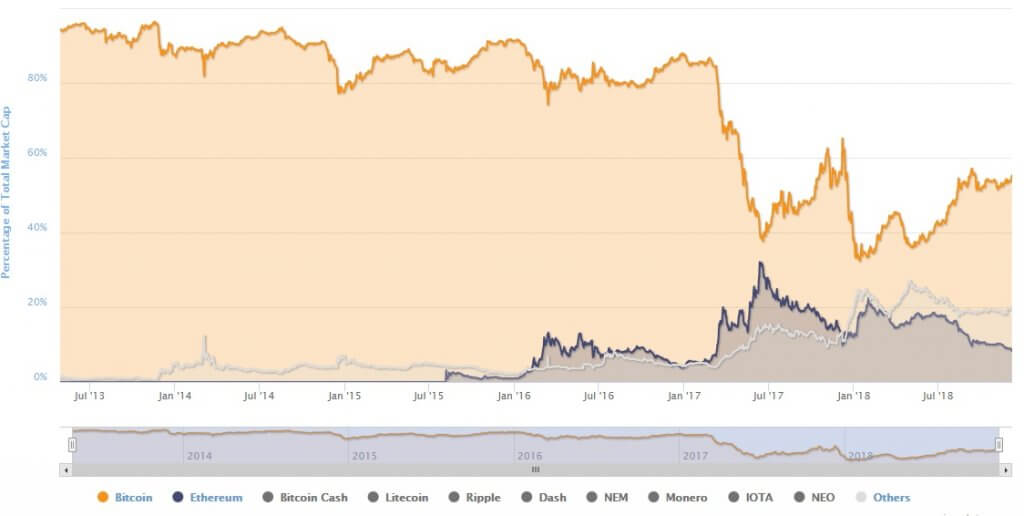 One of the key talking points from last year’s bull market was how well altcoins performed following Bitcoin’s touch of $20,000. Bitcoin dominance fell from over 62% to 33% in a matter of weeks, as much of the market rallied incomprehensible amounts before eventually crashing one month later.

This time around, in spite of Bitcoin’s flailing price, altcoins have actually followed suit by performing worse than Bitcoin itself. Bitcoin’s market dominance has actually increased to 55.3% over the past month, indicating that the altcoin purge may be set to continue.

The reality is that the vast majority of these altcoins were built on the back of an unsustainable hype-cycle of speculation in 2017, which saw even the least viable cryptocurrencies rally and inflate to unthinkable highs.

This made it seem like adoption of cryptocurrencies was on the rise, while in fact it was just further adoption of a get-rich-quick scheme where many of the retail investors had no idea about investments or blockchain technology.

As a result, it’s expected that a large number of ICOs will eventually wither away and die out. We have seen Ethereum, which is arguably the most well-known altcoin, fall to well under $100 today. Some are suggesting that Vitalik Buterin’s smart contracts platform will fall to as low as $55 before heading back to single digits.

Ultimately, the cryptocurrency space is yearning for a purge of altcoins that have no viable use case in the real world. This will leave the real businesses with real innovations to prevail, but it will be a painful journey before the space gets to that stage.

So, which coins will still be around in five years’ time? 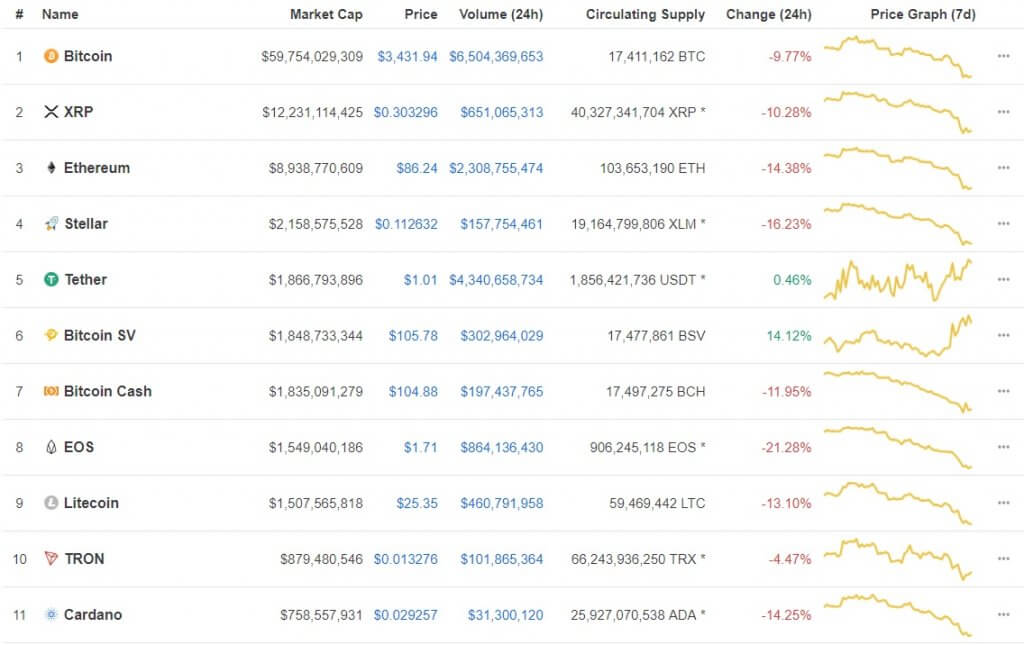 The truth is, no one knows which coins will still be around and performing well in five or even ten years time. If anyone claims to know for a fact, they most likely have a vested interest or an emotional attachment to a particular coin or token.

The issue with the 2017 bull market, and potentially the reason why the altcoin bubble popped, was that retail investors were investing solely on word of mouth. Investors rarely took the time to research and do their due diligence. This resulted in an amateurish sphere of people promoting their investment to another wave of amateurs.

The next bull market simply cannot happen if it’s based on hype and speculation. The ecosystem will have to learn from its mistakes. The market will only cycle back around once cryptocurrencies are being used day-to-day by the public. If that means that 95% of the market will die off, leaving 5% to pave the way for innovation, then so be it.


Bitcoin clings onto support as the infamous ‘Bart’ pattern returns

2TM, the parent company of Mercado Bitcoin, one of Brazil's largest cryptocurrency exchanges, has raised $50m in it's latest Series B funding round.

Bitcoin transaction fees have dropped from $4.40 to a staggering $1.80 this year, according to data gathered through YCharts.