STEFAN KYRIAZIS: "It's a ripe subject for a new drama or movie, especially as we face a terrifying 2019 where nothing seems certain or safe anymore"

The steady march towards mass adoption of cryptocurrency is set to receive a major shot in the arm from Hollywood.

TV star Kevin Connolly recently revealed he is to be part of a new show called ‘Cryptos’ – a blockbuster series charting the fortunes of five discouraged young filmmakers desperate to finance their movies.

The 44-year-old will be directing and starring in the project, which is expected to be released in 2020.

According to a Coin Rivet article for the Daily Express, the comedy drama sees the youngsters set up a financing company called Dionysia to use cryptocurrency and blockchain – crypto’s underlying technology – for funding their projects as they take on the Hollywood system.

Although not revealing his character’s role, Connolly, who shot to fame in the hit series Entourage, did lift the lid on how he hoped the series could make the confusing world of cryptocurrencies more accessible.

“The thing that scares people about crypto is a lack of understanding,” he told journalists at the North American Bitcoin Conference in Miami, which was attended by Coin Rivet columnist Irina Litchfield.

“People like myself are still learning, but the curiosity is there.”

It’s a view shared by the producers – Eric Sords, Steve Wong, George Shamieh, and Jason King – who have revealed their vision to “bring the cryptocurrency movement into mainstream consciousness, educate, and build trust in the marketplace for the technology and its continued growth.”

Cryptocurrency has suffered from a lack of enthusiasm in the last two months after Bitcoin plunged from a regular high of $6,500 during much of 2018 to its current value hovering below $3,400.

Backed by a big filming budget, the producers say they’re confident the time is right to bring cryptocurrency into the mainstream. And that confidence is mirrored by Stefan Kyriazis, Online Arts Editor for the Daily Express.

“Cryptocurrency is the hot new topic, but nobody seems to know what it is really all about,” he said.

“We are all fascinated by it, tempted by the promise of getting rich quick but afraid of something that doesn’t seem real.

“We all have a friend who is sure it’s about to make them obscenely wealthy. It’s a ripe subject for a new drama or movie, especially as we face a terrifying 2019 where nothing seems certain or safe anymore.

“Finance swindles, Wall Street scandals, and small-scale schemes and scams have all been done to death, but rarely actually relate to our real lives. It’s time for a rollicking cryptodrama that’s a little closer to home.” 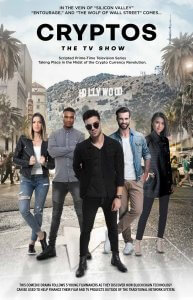 Two hacker groups 'behind 60% of ALL crypto heists'

An in-depth look at Grin, Beam, and Mimblewimble

Bitcoin’s future could be rooted in Plato’s philosophies

Let’s be realistic about crypto – and ourselves – in 2020