DOMINIC FRISBY: "There are signs this market is stabilising and flattening out, but, as a man who knows his bears, I would suggest that at some point, Bitcoin needs to at least retest its lows. I think time-wise we need a little bit longer"

With another week of sideways action on our hands – up a little bit then back down again – I thought today I would take a step back and ask a question that must be on every crypto investor’s mind: how long will this bear market go on for?

The way I am going to answer that question is by looking at two infamous bear markets of the last 20 years, in sectors with many parallels to Bitcoin: dotcom and gold. We will start with dotcom.

In 1999, the internet was going to change the world. Everybody could see that. And so there arose an investment mania the like of which the world had (almost) never seen before. Investopedia describes the boom:

Venture capitalists anxious to find the next big score freely invested in any company with a “.com” after its name. Valuations were based on earnings and profits that would not occur for several years if the business model actually worked, and investors were all too willing to overlook traditional fundamentals. Companies that had yet to generate revenue, profits and, in some cases, a finished product, went to market with initial public offerings that saw their stock prices triple and quadruple in one day, creating a feeding frenzy for investors.

Here is the Nasdaq over the period. 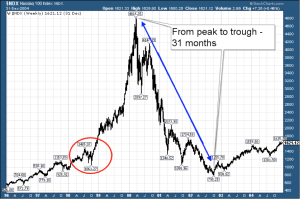 Of course, the Nasdaq incorporates the largest US tech firms. Many of the smaller ones multiplied by many times more than the Nasdaq, and when they failed, they disappeared altogether.

What’s more, at its apex in 2000, the market cap of the Nasdaq was over $6 trillion – and that was in the more valuable US dollars of 18 years ago. Crypto still has not passed the $1 trillion mark.

So here’s the question: was 2017 Bitcoin’s dotcom moment, or is that still to come? Was Bitcoin in 2017 similar to the Nasdaq somewhere in the mid-90s? Perhaps the “really” big bubble is yet to come – the one that sucks in the institutions of Wall Street and the City. It is hard to see how any bubble could be bigger than 2017, but then this is a new tech and a new system of money – the potential for bubbles to form around such narratives is pretty immense. If crypto can solve its usability and user-friendly issues, then many more people could get sucked in.

So perhaps this is more akin to the 30% correction the Nasdaq had in 1998 (circled in red). We shall see. One doesn’t want to get too trapped in the mindset of imposing one market from one age onto another.

I wasn’t much involved in markets in those days, but somehow I still ended up with a couple of dotcom turkeys in my portfolio, and I was certainly able to see the madness of what was taking place. I was 31. Today I’m 49. Most people working in crypto today are in their 20s and 30s. They’re too young to remember dotcom.

We are 13 months into this crypto correction now. It doesn’t feel to me like we have had the final low yet. Even if 2017 was not Bitcoin’s dotcom, it was still pretty epic. A lot of money got sucked into the sector, much of it inexperienced. There needs to be a greater purging. More companies need to go under, I’d suggest, before the foundations are ready for the next surge up.

The other market where I see great parallels with Bitcoin is in the speculative mania around gold that came earlier this century. Gold made a multi-year low in 2001 at $250 and then rose through the decade, before eventually making a peak 10 years later in 2011 at $1,920 an ounce.

A similar political narrative accompanied the rise of gold: fiat money is wrong, the system is broken, there is too much debt, inflation is concealed, there has to be a better money system to be built around something incorruptible – like gold.

But somehow or other, junior mining exploration companies became a kind of option on the gold price. If gold went up 10%, these companies might double. Ten-baggers were not uncommon. Some even got 100-baggers. When the bust came, funding for these exploration companies dried up. Most lost over 95% of their value or more. Hundreds went out of business altogether.

Exploration is a bit like tech. It doesn’t make any money. Just as tech is capital intensive and experimental with no guarantee you will have anything of value by the end of it, so is exploration: you’re staking ground and drilling it in the hope that you find something. There is no guarantee you will. Often, you spend the money only to make the discovery that something will not work.

It is worth looking at a “typical” small cap. Granada Gold (GGM.V), formerly known as Gold Bullion Development Corp (GBB.V), is a good example. Its main asset is one of the best undeveloped properties in Canada. There is no doubting the property. But there were numerous questions about the competence of the management. The stock was over-promoted. The management made all sorts of promises – we are going to be producing gold by this date, we are going to pay our shareholders a dividend in gold – and failed to deliver on all of them. It kept raising money and diluting the stock. They saddled the company with debt. They faced fines by the Canadian authorities for misuse of funds. They had loads of chances to get themselves taken out, but the management’s priority was not their shareholders. It was like the worst kind of ICO – a decent idea, but oversold, with shareholders overlooked while the management drove about in sports cars. 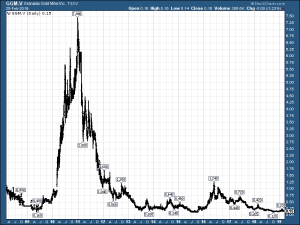 Perhaps the quality of its main exploration asset is the only reason this company has not gone bust. But look at that chart and you can see just how long bear markets can go on for.

Crypto is different, as I often say. It is younger and more dynamic. There is less regulation to slow things down. Things will move faster. But the price movements will be just as bad.

An 88% sell-off is enough in magnitude to inflict the pain concomitant with the unwinding of a bubble, but I can’t help thinking that it has not quite gone on for long enough yet.

There are signs this market is stabilising and flattening out, but, as a man who knows his bears, I would suggest that at some point, Bitcoin needs to at least retest its lows. Second, I think time-wise we need a little bit longer. A year is not enough. I know I have estimated 12-18 months, but maybe I should say 12-24. We shall see.