Bitcoin's hash rate has recently hit new all-time highs of over 100 exahashes per second - will price follow the same pattern?

As you may already know, a high hash rate means miners are flocking to the space, which not only puts extra pressure on mining hardware but also increases the difficulty of the next algorithm adjustment.

As such, I believe we’ll either see BTC pumping over $20,000 soon or we’ll have a mass exodus of miners.

Because I hardly believe energy has suddenly become cheaper, miners will need to keep selling Bitcoin above a certain threshold to remain profitable. That, in my opinion, could definitely put positive pressure on BTC price.

There are two main factors I will explore in this piece that show there is a correlation between the hash rate and price given the underlying security assumptions.

In essence, I will try to answer the following questions:

A) Is the Bitcoin protocol hash rate correlated to price?
B) Why does a higher hash rate attract more long-term investors? 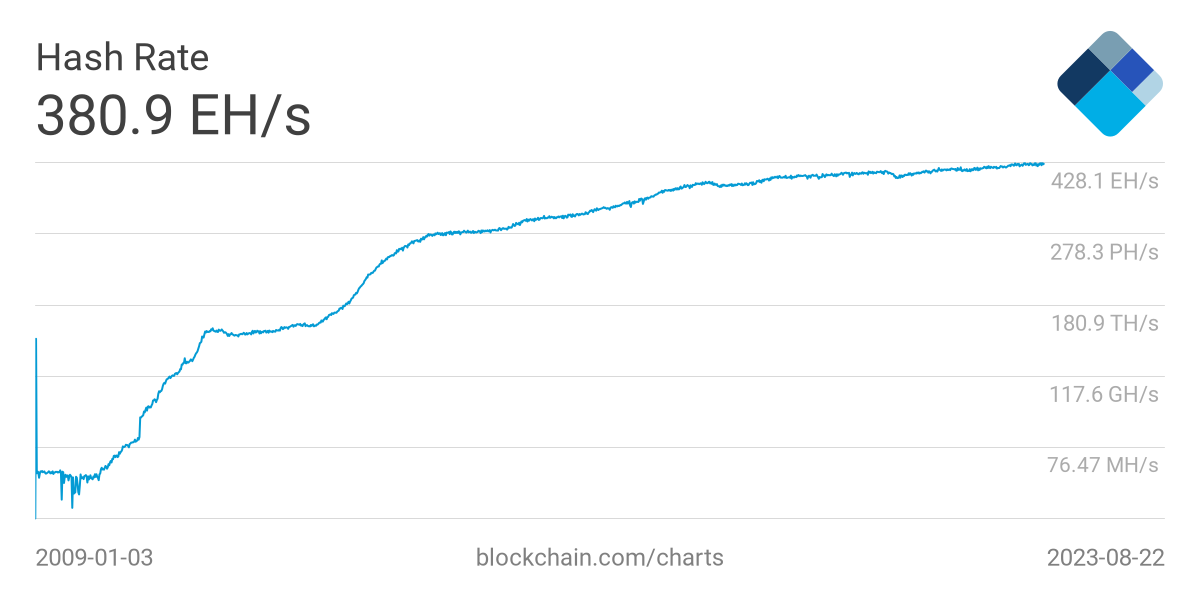 Looking at the hash rate logarithmic chart above (courtesy of blockchain.info), we can see that Bitcoin’s hash rate has clearly been growing since its inception.

Not only that, but due to the difficulty adjustment mainly adjusting to the upside, that means it has become more and more expensive to mine a single Bitcoin, as miners need to spend additional resources (mining equipment and energy) in order to validate a block to earn the fees and the block reward.

It’s also worth mentioning that in less than a year, the Bitcoin protocol reward will halve to 6.25 BTC per block. This will put extra pressure on price that could help BTC achieve new all-time-highs.

So does Bitcoin’s hash rate correlate with price? And why is the hash rate increase better for Bitcoin if fees will also increase as it becomes more expensive to mine BTC?

I admit this isn’t the nicest looking chart, but the information it contains is incredibly important.

First, we can see there is a clear correlation between hash rate and price. Usually, hash rate tends to be the leading indicator (except during the 2012-2014 bull run as price started pumping before the hash rate accompanied it).

Of course, that could be due to a simple historical reason: it was the first time BTC had exponentially risen and fallen (2011-2012). It was therefore hard to predict if price was going to recover, meaning fewer people decided to mine the cryptocurrency given energy requirements were already starting to take their toll on mining profitability.

After price started skyrocketing and surpassed the previous all-time high around March 2013, we see a clear boost in the hash rate as more people were confident BTC was here to stay.

If we need extra proof, we can take a look at the next bull/bear cycles. After the bust in 2014, even with Mt Gox going under, the Bitcoin hash rate kept increasing. Price took about two and a half years to reach its new all-time high, surpassing the hash rate once again (albeit briefly).

Although there was a minor decline in late 2018 as the price of Bitcoin tumbled to $4,000, the hash rate has since recovered and has been growing non-stop.

I argue it’s only a matter of time before price returns to the same level as the hash rate, meaning a $20,000 BTC doesn’t seem that far away.

Still, could the hash rate follow price instead? As discussed above, there have been plenty occasions hash rate has followed price-action. Nevertheless, it seems to me miners do tend to signal intentions before price moves. For instance, after the dip in late December 2018 miners started pumping the hash rate before the big price move that started around February 2019.

In addition, there’s a clear relation between hash rate and security, one that attracts long-term investors.

Bitcoin network hash rate is over 100 Exahashes per second.

Largest supercomputer in the world grows by the day. 🔥

One reason why investors may look into Bitcoin is because not only are the prices of fiat currencies and government bonds inflated due to the enormous surplus of currency produced by central banks and injected into the markets through continues quantitative easing, but also because Bitcoin is becoming increasingly secure by the day.

One of the key characteristics of Bitcoin’s security is how hard it is to make changes to a block that was validated in the past.

In essence, as more participants join the network, Bitcoin becomes:

As seen with Bitcoin Cash and other hard forks, Bitcoin’s resilience is much greater than one would expect. Many attempts have been made to alter its block weight, total supply, and hashing algorithm, and all turned into altcoins that have lost most of their value vs BTC.

In addition, if an entity tries to attack the Bitcoin network, it needs to spend more computing power (energy) to mine ahead of others and to sustain the new chain during an attack.

In conclusion, due to the increasing security of the Bitcoin protocol and due to price, normally, following the growing hash rate, I suspect we will soon see Bitcoin reaching new all-time highs.

The US House Financial Services Committee has been discussing the use of Bitcoin in domestic terror financing, with some experts claiming it is now being used by neo-Nazi groups....