How to spot an ICO scam

Investing in cryptocurrency is not for the faint-hearted, and most investors are inexperienced at best. Here are a few ways to avoid falling for an ICO scam.

When research by the Satis Group revealed that 81% of ICOs were scams, investors began to take notice. A revolutionary technology that democratises investment in early-stage innovation is one thing. Sending all your ETH to an unscrupulous criminal in an ICO scam is quite another.

According to a report by the Wall Street Journal, more than $1 billion has already been invested in ICOs bearing all the hallmarks of scams. But with plenty of well-intentioned projects and plausible ideas, how do you spot a possible ICO scam? Here are a few red flags.

Many people are new to the blockchain industry, and con artists are just waiting to take advantage. If you find a project’s whitepaper littered with elaborate words or strings of buzzwords tethered together, it could be a sign of an ICO scam. And if it isn’t a scam, it’s concerning.

After all, if the project in question can’t explain what it does, how does it expect investors to know? The WSJ report analysed some 1,450 tokens and found troublesome red flags with almost 300 of them. Among these were plagiarised documents, outlandish claims, and “whitepapers” that were copied verbatim from other projects.

The need for a token

Before investing in an ICO, you should ask what the token’s role in the business model is and whether using blockchain technology is fundamental to its core. Does the token have a clear function either inside the company’s ecosystem or out?

More often than not, upon closer analysis, you’ll find that there is no need for a token and that the business model would work fine without it. If the token is purely a means of raising funds, that doesn’t bear well for the longevity of the project, whether it turns out to be an ICO scam or not.

A fake team or red flags among the advisors

Ask any venture capitalist what they look for when investing in a project and one of the first things they’ll tell you is a solid management team. While it’s hard for a retail investor to carry out the same level of due diligence as an investment firm, you can still avoid falling into the basic traps.

How much information is available on the management team? Are there people with real photos and company contact details? Are their LinkedIn profiles available and not just created for the company page? Check out each member’s experience in their area and what they bring to the table.

WSJ found several blockchain companies with fake teams and advisors. So, if you see any well-known names that look too good to be true, dig deeper – it could be a sign of an ICO scam.

Just because advisors are well-known in the industry doesn’t mean the project will succeed either. If you haven’t heard of all the sh**coins John McAfee has endorsed until now, you should probably do some extra research.

Not even a line of code

2017 was the year of the ICO, and the first quarter of 2018 saw ICOs raise even more money than the whole of the year before, totalling a whopping $6.3 billion. However, it’s clear that the days of investors clamouring to send their ETH to an unknown company because of a flashy whitepaper and a fancy website are gone. 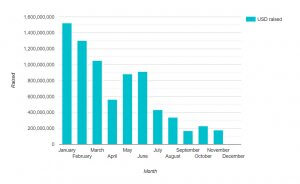 That’s probably a good thing, too, when you consider the amount of greed, hacks, and scams that arose from this fundraising method.

However, whether it’s an ICO, STO, or any other kind of token sale, just because it’s regulated doesn’t mean it will go the distance.

Remember that you’re investing in emerging technology. If the project that piques your interest can’t demonstrate a single line of working code, or that they know how to use the technology they’re dealing with, that may not bode well.

An overly long roadmap could mean an ICO scam

Every project is different, so it’s impossible to have a hard-and-fast rule when it comes to how long a roadmap should be. Finding a cure or prevention plan for cancer may take significantly longer than launching a cryptocurrency exchange, for example.

However, when looking out for an ICO scam, make sure the roadmap seems coherent with the project. Make sure there are enough funds allocated for each stage along the way. As a rule of thumb, any project with a roadmap longer than two years may be problematic.

Consider it carefully, and ask questions if you can. Projects with long roadmaps have more potential for running out of funds before completion.

Investing in an ICO is not for the faint-hearted. As with any type of investment, never put in more than you can afford to lose and watch out for these basic red flags that could help you avoid falling victim to an ICO scam.

How could blockchain change the retail industry?