Is decentralisation the solution?

Before we dive in, I would like to briefly introduce the different components operating in a blockchain, as we’ll be able to actually scale this technology in a time not so distant from now, by combining multiple technologies in different layers of the blockchain.

First, we need to go back a little bit and think back to how to scale this technology?

If we try to scale the first layer, blockchain, we’ll most likely have a really bad time.

Just think of Bitcoin Cash, as an early attempt to “improve” the initial layer, by adding extra space in each block in order to increase the number of transactions per block.

Of course, this would also mean each block would be heavier, so at the end miners would need extra resources to store the extra GB; this, to me, could drive Bitcoin to an even higher degree of mining centralisation. 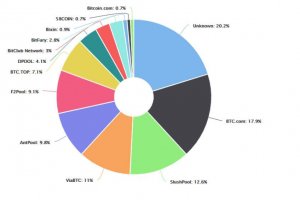 This is why we should always aim at segregating each layer to focus in only one feature. Hence,

If each technology gets deployed independently and developers find ways to allow for all to communicate in-between, it makes sense to me we keep things separated, in order to avoid over-complicated systems.

Plus, simple solutions always pose the lesser risk, as there are fewer possible back doors.

So, how can we promote decentralisation and how will that influence other dimensions? 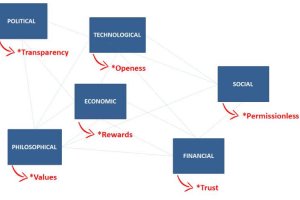 The image above shows how I believe decentralisation of both governance systems and infrastructure could potentially be applied to each dimension.

It’s quite easy to understand if our goal is to improve everyone’s wellbeing, it makes sense to promote higher transparency in political systems, through new forms of electronic voting (although there are some problems associated to e-voting).

To increase both the openness of technologies and permission-less of social-related platforms (including monetary systems) by introducing economic incentives, such as rewards, to completely change the philosophical perspective of users, as they’ll get more value from each online interaction.

Finally, I do believe decentralisation will increase agents’ trust in financial systems, simply because there will be a higher degree of accountability.

The mission of decentralisation is our ability to redistribute responsibilities and rewards.

The key difference is that in most cryptocurrency projects there aren’t actual rights, but instead, there’s a promise of a payment for completing a certain type of action.

I have previously mentioned that ownership is a key dimension in capitalism. Since most tokens do not grant any ownership rights, at least not in the same way traditional stock makes holders actual owners of a share in a company, there must be an alternative way to still grant token holders some kind of ownership.

The way most crypto-projects work is by giving rewards in exchange for services, like securing the network, creating content, validating transactions, etc.

Although token holders aren’t rightful owners, they still win a reward which can be considered value, as people are looking to buy those tokens in a marketplace to use within a platform, product or protocol.

I could argue the role played by decentralisation is to give back power to users, as we’re simply shifting the burden of decision-making towards users.

Independently of your personal feelings towards fiat-currencies, as seen on the previous articles, data shows each and every currency out there is doomed to fail due to a single reason: inflation.

Unless there is a rigorous, transparent and democratic system on who should have the ability to produce money and when, then we could maybe save fiat. Still, it seems like a stretch to me.

Why would you force a system to change, if you can build a better one from scratch?

That’s precisely the role of Bitcoin other cryptocurrencies.

They’re the alternative to so many people around the world without a chance to participate in global commerce.

Imagine what will happen to the global economy when those 33% unbanked people around the world, or literally anyone living in a country which is suffering a currency devaluation crisis, realise they can simply download an app and get paid in a currency accepted everywhere.

I cannot conceptualise the impact on our daily lives, but from a financial standpoint, this is what I see: 2.3 billion more customers for every business, potentially. By including people in the global financial system, people who did not have a chance to participate before in the world economy, you can now reach new customers everywhere; because the means of exchanging are borderless and permission-less, no one can be blocked from exchanging value and services.

The digitalisation of the world, via mobile smart-phones with internet access, could change how we do business forever.

For example, if you have a company running in African or Latin American countries, you might know it’s near impossible to take money from those places, due to the many currency-related restrictions.

You can now hop over that problem, just by transacting in cryptocurrency.

Or maybe, if you’re willing to train a whole new workforce – who, by the way, needs much less cash to sustain an acceptable standard of living – you can find new ways to become more profitable, while at the same time better redistributing wealth across the world.

The true beauty of Bitcoin and other cryptocurrencies remains to be its decentralised, permissionless and transparent nature, so I hope all of you crypto-enthusiasts out there don’t forget the most important aspect of cryptocurrency:

To enable a truly global economy.

Disclaimer: this article shouldn’t be taken as financial advice; it represents my personal opinion and should not be attributed to Coin Rivet. I have savings invested in cryptocurrency so take whatever I write with a grain of salt. Do not invest what you cannot afford to lose and always read as much as possible about a project before investing.


The blockchain…not as secure as you think

Censorship in cryptocurrencies and cult-like behaviour

BREAKING NEWS: Bitcoin is now over $4,000 on Bitfinex