It turned out to be true. The rumours and speculation that arose when Facebook began advertising job openings for blockchain engineers were right.

Facebook’s first foray into cryptocurrency is coming – first dubbed ‘Facebook Coin’, then ‘Global Coin’, and now officially announced as Libra with the release of the white paper.

The way the white paper reads reminds me a lot of Stellar Lumens and what it is aiming to accomplish. Facebook could have just built on top of Stellar, but it likely saw too little profit and too little control with that approach.

The approach Facebook is taking is to invite 100 organisations to become members of the Libra Association. The social media giant is also charging $10 million for the privilege of running a node on the network to validate transactions.

Like Stellar, the Libra Association is a non-profit organisation, the purpose of which is to coordinate activity relating to the growth of the Libra ecosystem. The founding members are listed in the white paper and feature many household names such as PayPal, Visa, Mastercard, eBay, and Uber.

It’s at this point we have another instance of something I mentioned in a previous article. In that post, I mentioned how the masses are not interested in investing a lot of time researching and thinking about new technologies in order to derive trust from understanding. They much prefer to wait for a signal from an organisation they see as an authority and just assume that organisation has done the research and thinking for them.

This is principally why I ask whether Libra will become the best gateway drug for the existing cryptocurrency industry. More than two billion users log in to Facebook each day. With a bank of attention like that, Facebook can jump to the front of the line of advertisers and provide instant exposure to any new feature or product. The minimal amount of effort born out of it being integrated with Facebook avoids the apathy that has no doubt hindered Bitcoin adoption among Facebook users.

The same problem as Voice

If you think back to another one of my articles about the new Voice social network, you may notice that they share a similar obstacle – the requirement to verify your identity.

The conflict I see there with Libra is that it is designed for financial inclusion but will struggle to verify the identity of people in countries that don’t have a working government ID system that is digital. There is however a part of the white paper that states: “The Libra Blockchain is pseudonymous and allows users to hold one or more addresses that are not linked to their real-world identity.”

So we will have to see how that manifests in the final product.

Watering down the dream

The big question is this: how close to the original white paper will Libra end up being? The US Congress is already calling for Facebook to slow down if not stop development of Libra until they have had a chance to get their head around it and determine what kind of risks it poses to consumers.

It is likely that the original vision for Libra will become diluted by regulation before it is launched. Keep your eye on the headlines for news on how this develops.

A gateway drug is what we call something that is a mild introduction to something that gets the user hooked before they trade up to something stronger. This may be what happens when Libra is launched. Facebook will do all the work of introducing the concept of a cryptocurrency to its huge user base, get them used to it, and then it’s a much smaller leap for those users to adopt Bitcoin.

Here is an illustration of the process of buying Libra, provided by Facebook: 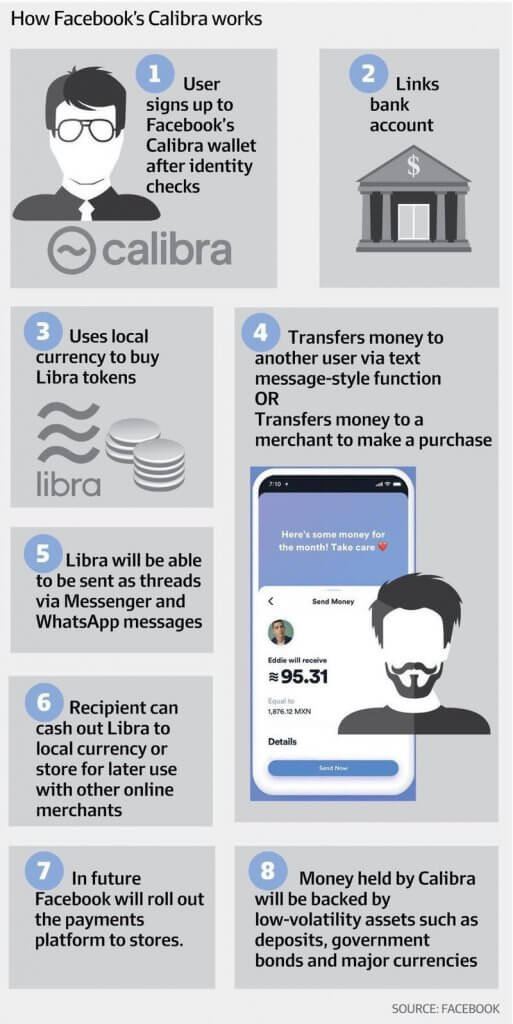 All it would take is for one of the cryptocurrency exchanges to create a market that allows Libra to trade against Bitcoin and the average Facebook user has a way of buying Libra with their national currency and exchanging it for Bitcoin.

Even if regulation doesn’t allow cryptocurrency exchanges to list Libra, it will undoubtedly end up on decentralised or peer-to-peer markets such as OpenBazaar, with individuals trading it directly between themselves.

Is there a darker side to Libra?


Is there a darker side to Libra?! (Facebook’s new crypto project)

Five types of cryptocurrency jobs on the market