Is mainstream Bitcoin adoption on the rise?

PEDRO FEBRERO: "Although Bitcoin has had a rough 2018, it’s important to recognise that the future still burns bright"

The pain inflicted by the crypto markets has been extreme this year. It’s become clear that the market ran way too high, way too fast in 2017. Many traders knew a severe correction was forthcoming, but I doubt many predicted the full-fledged bear market would be this extreme.

However, while the markets have been painful, Bitcoin (BTC) serves a bigger purpose than just making money in the markets. To some, that purpose is to become a worldwide digital currency that can eventually be used to purchase anything. To others, the main purpose is to become a store of value to prevent against the inflation that plagues fiat currencies. Either way, it’s important to remember that this is just the beginning.

Bitcoin is still in a very, very early phase of adoption. Let’s look at the graph below. 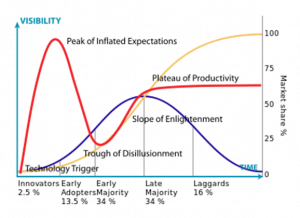 The technology adoption life cycle is a sociological model that describes the adoption or acceptance of a new product or innovation, according to the demographic and psychological characteristics of defined adopter groups.

Many consumers still have no idea what Bitcoin is. When people google the term Bitcoin, they are likely to get the following definition: “Bitcoin is a digital currency that is not backed by any country’s central bank or government. Bitcoins can be traded for goods or services with select vendors.” However, the truth is that Bitcoin can’t be used to buy things that would be useful for most people. Consumers can’t use Bitcoin to buy groceries, pay the cable bill, pay for medical expenses, buy a car, or purchase a home. For years, Expedia (one of the world’s largest travel booking engines) allowed consumers to use Bitcoin to make hotel reservations. But even that was taken away in June.

When there’s a full-fledged global financial crisis, Bitcoin could indeed become the first stable, decentralised digital store of value that everyone so desperately needs. But until then, Bitcoin has clearly yet to achieve its intended goal.

Based on the graph above, I can confidently claim that Bitcoin is still in the innovators phase. However, one big innovation that may in the future help push Bitcoin into the early adoption phase is starting to get traction.

Although Bitcoin took the world by storm in 2017, one big problem has always loomed large: scalability. The ability to scale to the required size was a concern when Bitcoin was first introduced to the world, and it remains a problem that needs to be addressed. What does scalability entail? Well, let’s look at the visual below. 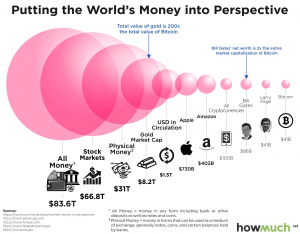 Bitcoin is currently sitting at about $56 billion in terms of volume, meaning it’s now worth a bit more than Larry Page’s fortune. How delightful.

At present, Bitcoin is only capable of processing approximately seven transactions per second. Compared to PayPal, Ripple, and especially Visa, Bitcoin needs to improve dramatically. One way that Bitcoin may be able to perform significantly better is through the Lightning Network.

It’s currently estimated that the Lightning Network will have the potential to process 1 million transactions per second. The most up-to-date statistics show great improvements being made in user adoption.

I really don’t think one could hope for a better outlook, given the current bear market.

Although Bitcoin has had a rough 2018, it’s important to recognise that the future still burns bright. Bitcoin is still in the innovators phase of adoption, and while the Lightning Network is set to address Bitcoin’s biggest hurdle, better days are ahead.

Investing in crypto: The basics you need to know