DOMINIC FRISBY: "The question we have to ask ourselves is whether the coming storm is going to blow crypto prices higher or lower. The latter is always a possibility. Don’t assume the former"

Welcome to this week’s analysis of the crypto prices. I’d like to begin by saying it was another volatile week in which cryptos across the board registered double digit gains, but, yet again, it was not one of those weeks. This was another week of sideways action and consolidation with a slight downward bias.

You may associate crypto with volatility, but, in fact, over the years these periods of sideways action and relatively low volatility have not been uncommon. I’ve known them to go on for many months. The last quarter of 2012, spring to autumn 2013, almost all of 2015. They are a good thing. They presage big moves. The longer they go on for the bigger the move that follows. See what came after 2015 for more details.

Let’s start with the daddy…

This is Bitcoin in 2018. It remains in that same triangular range I have been harping on about since I began writing this column. I have identified it with those dashed red lines. 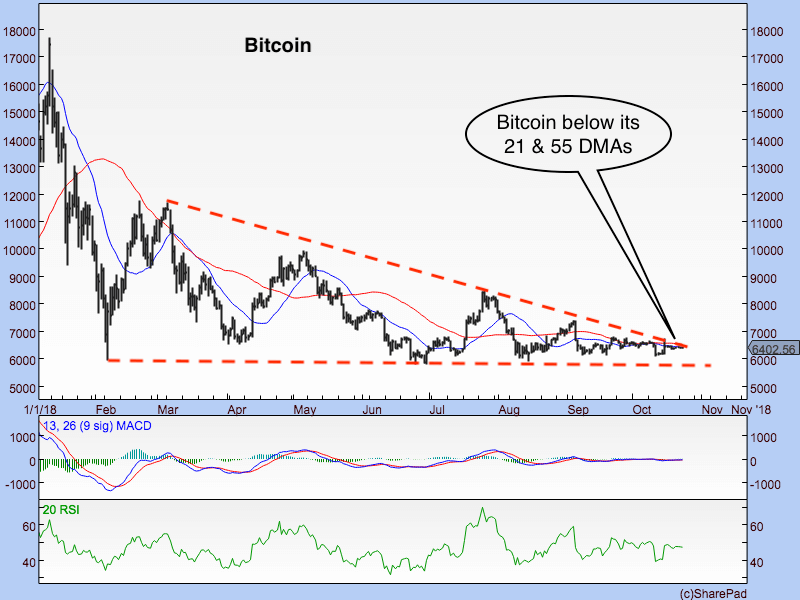 In a trending market the fact that it has slipped beneath its 21-day (blue line) and 55-day (red line) simple moving averages, and that they are both sloping slightly down, would be a concern. But given this is such a trendless, range-bound market I am not that concerned.

MACD is flat. So flat it appears to have expired. I am wondering if we should alert the emergency services.

Further indication of this direction-less market is the RSI, where Bitcoin remains in the middle of the range.

As long as that dashed red line around the $5,800 mark holds we are alright. Consolidation may frustrate the impatient but, at the moment, from a big picture perspective, we want to see this bear market bottoming out. Let’s have an end to the falls. Let’s take some sideways action. Then let everyone go to sleep. Then let the new bull market begin.

Ethereum is one of the weakest-looking of the crypto currencies, I’m afraid. It’s suffering badly with the post-ICO hangover.

It just cannot get above its 55-day moving average. Every time it gets close, it simply bounces down and grinds lower. The trend, by any measure, is down. MACD is worryingly mired below the zero mark. RSI is similarly atrophic (I don’t know if that word “atrophic” even exists, but I like it, so if it didn’t exist, it does now!). *Editorial note below.

On a positive note, however, it appears to have made some kind of a low where I have drawn the dashed red line. 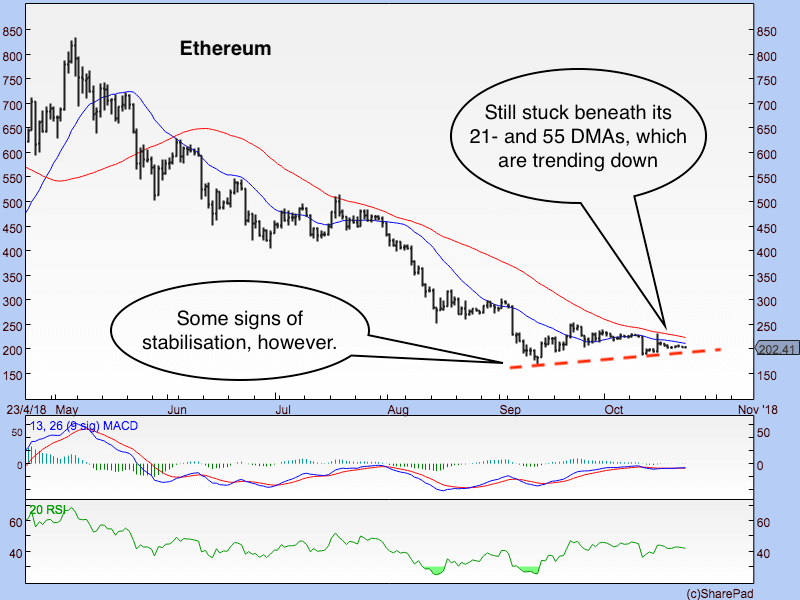 I’d be reluctant to risk anything more than small amounts bottom-fishing risk capital into buying Ethereum, but given that it is sitting on support just now, a low risk trade is buy with a stop just below the lows of a fortnight ago. You never know you might nick a win.

It’s pretty much the same story as Ethereum: trending down, below its moving averages, flat MACD and RSI, but some signs of stabilisation around the dashed red line. 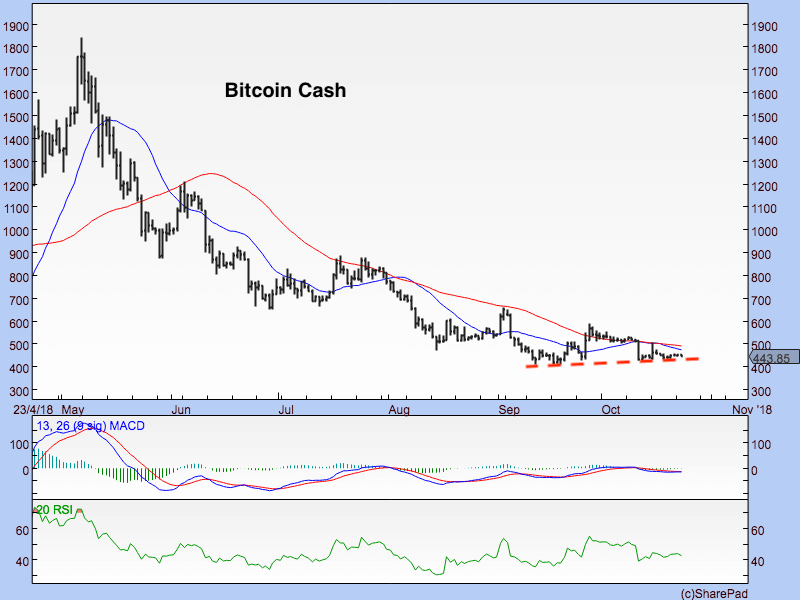 Name me a coin, and I’ll be able to show you the same pattern. With a couple of exceptions, the altcoin market is trading as one. 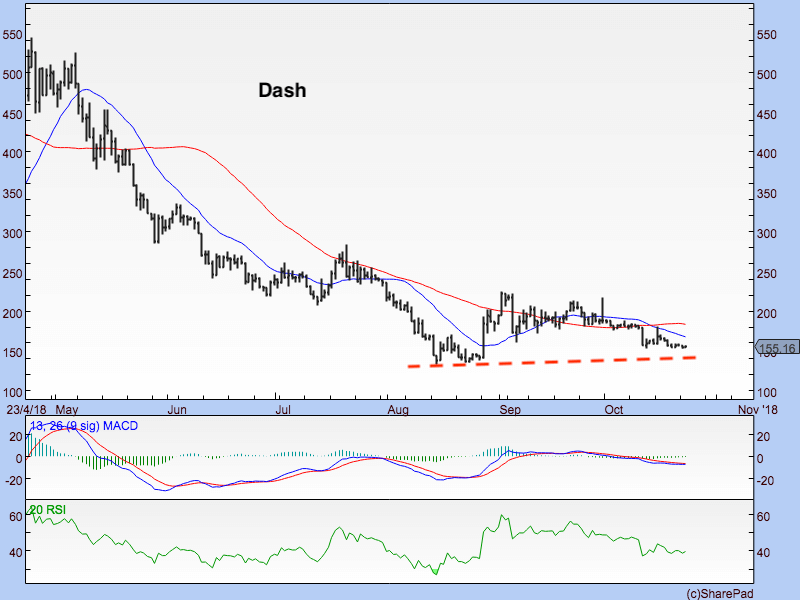 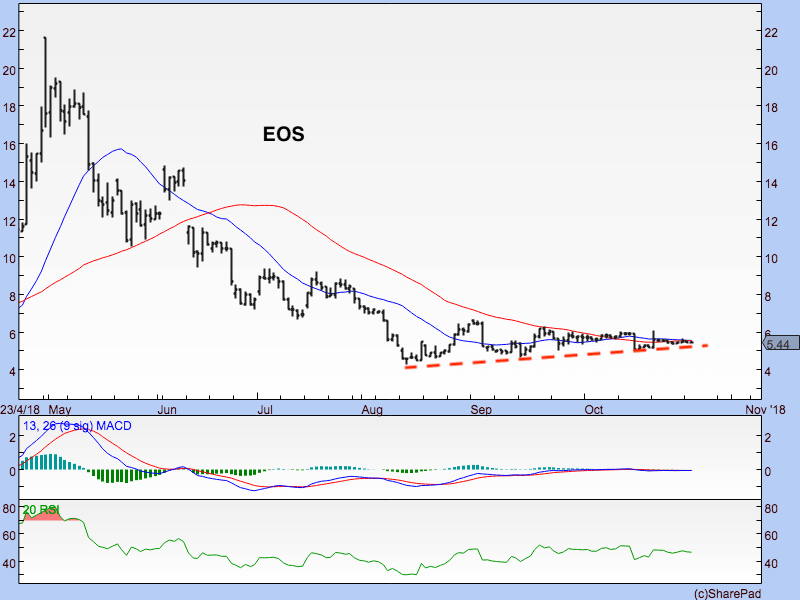 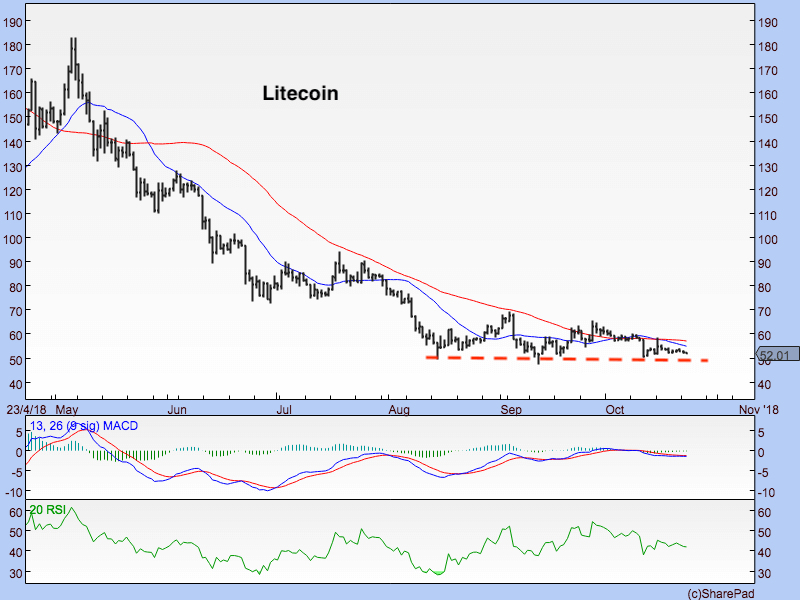 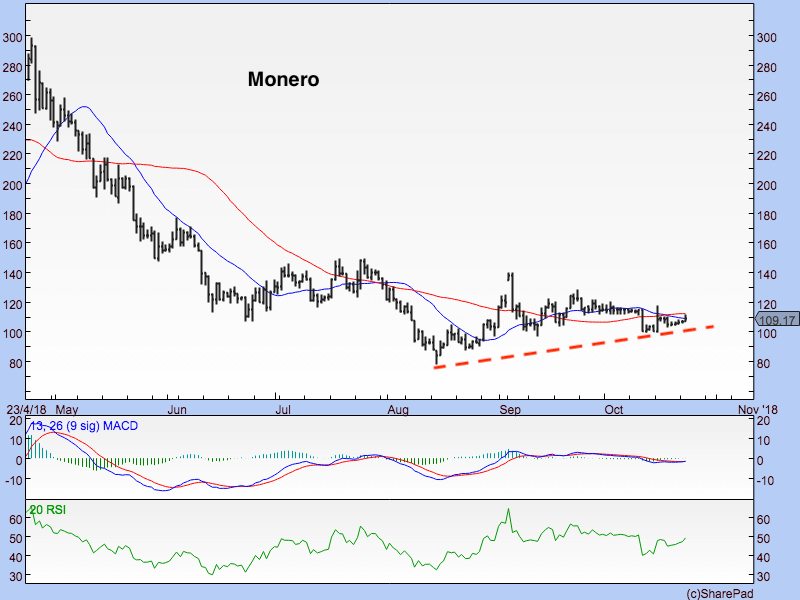 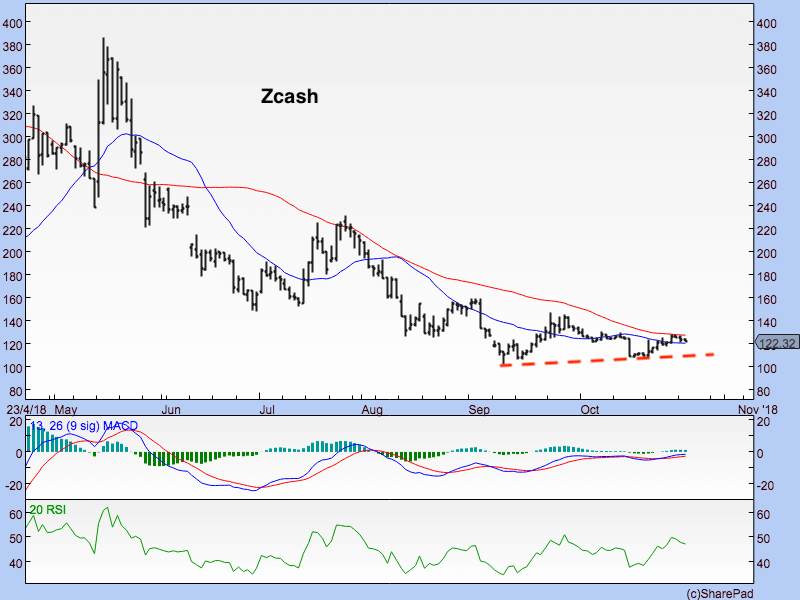 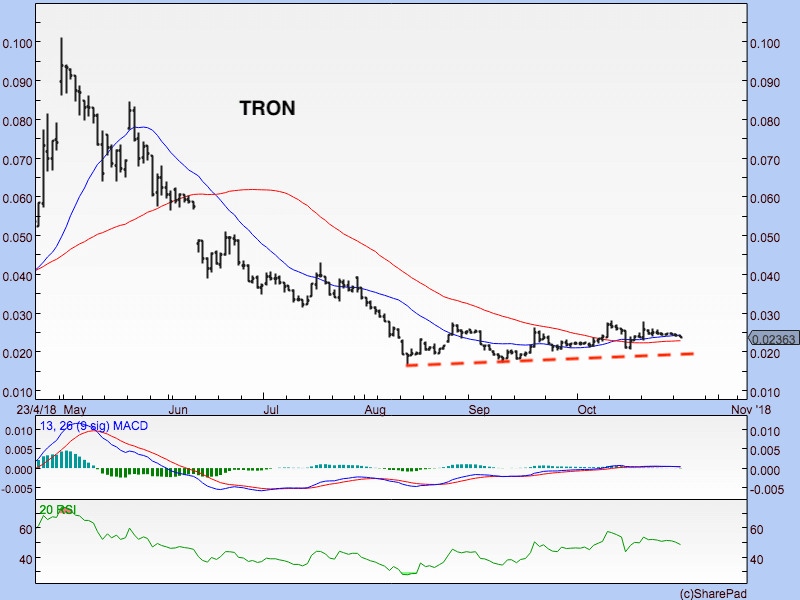 And this is Cardano… 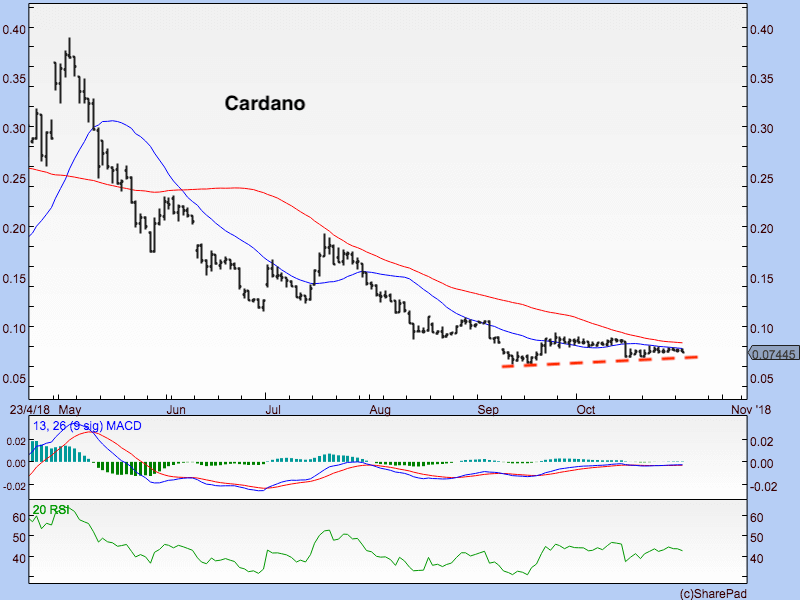 It’s the same story all over.

Of the above coins, the ones with the ascending dashed red lines of support look the strongest to me, Monero especially.

Stellar, pictured below, is on a different path. It has got above both its 21- and 55DMAs, and the latter is sloping up. Having shown relative strength during the crash, every low it has made since late June/early July has been higher than the last. It’s not a rip-roaring bull market, golly no, but this is positive action. Given what has been going on elsewhere, it is impressive. 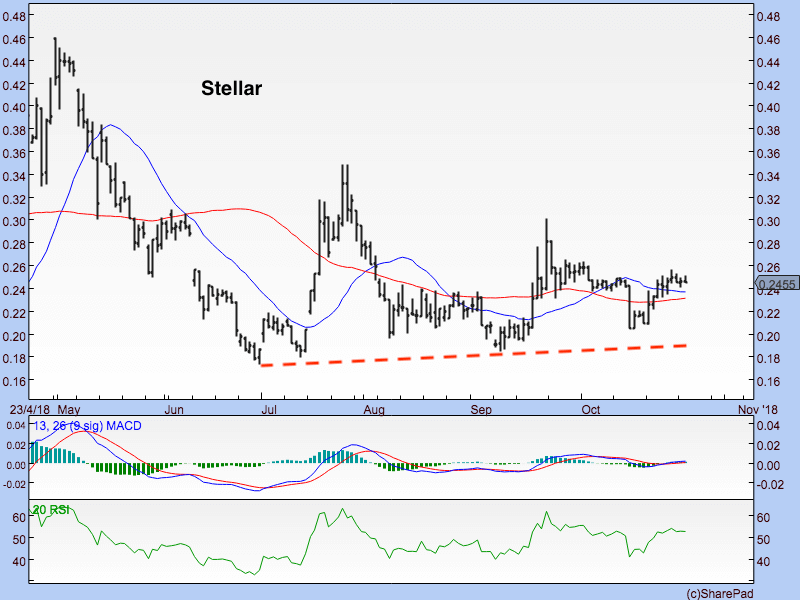 Ripple too broke the mould since its bust-a-gut spike in September, since when it has been trying to consolidate. As long as it stays above 35-40c it’s okay. 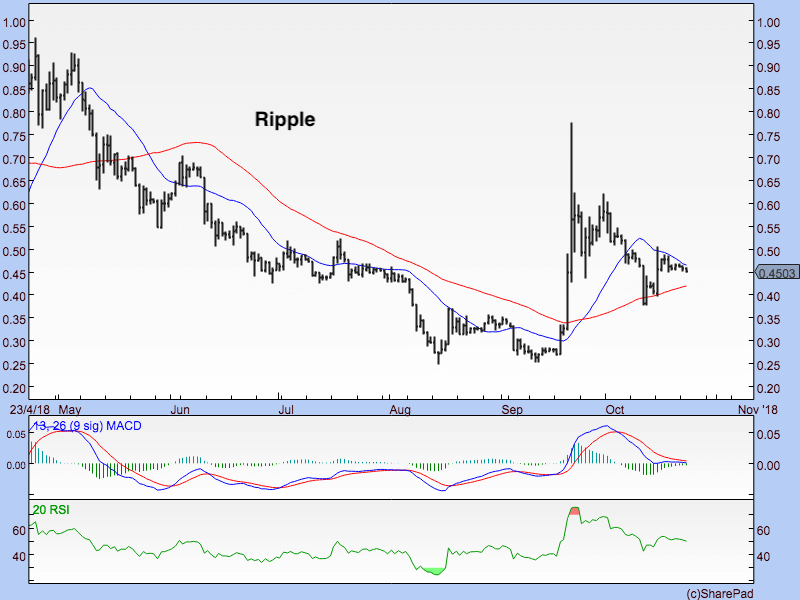 This period of consolidation is one of those calms before the storm. It could go on for several months yet. The question we have to ask ourselves is whether the coming storm is going to blow crypto prices higher or lower. The latter is always a possibility. Don’t assume the former.

We will know when the time comes. For now, we should be glad that this bear market is showing signs of bottoming out.

Dominic Frisby is the world’s only financial writer/comedian. His book Bitcoin: the Future of Money?, published in 2014, is probably the first book on Bitcoin from a recognised publisher. It is certainly the best.  Follow Dominic @dominicfrisby

*Atrophic :- a degeneration of tissue.