4 questions to ask before investing in a GameFi project

GameFi in 2022 continues the popularity of last year, with more than 1,400 GameFi projects across 35 chains as of April, according to Footprint Analytics. While the number of users is still far from that of traditional games, the projects have attracted more than 1 million new users in March.

GameFi is core to play-to-earn, and as users, they not only enjoy the games but also care about the revenue they bring. Therefore a new GameFi user should know the following four things when choosing a project.

A technically competent team allows a project to be more secure and constantly evolve in the ever-changing blockchain world. Therefore, one thing to look for are teams with a background in traditional gaming. This ensures some level of quality because of previous game operations experience.

However, as a GameFi project, the economic model of the game is also crucial, and having a financial background can also help in designing a good model. Receiving capital injection is a certain degree of capital recognition. Getting more well-known VC investment or more rounds of financing are reflecting the potential of the project. 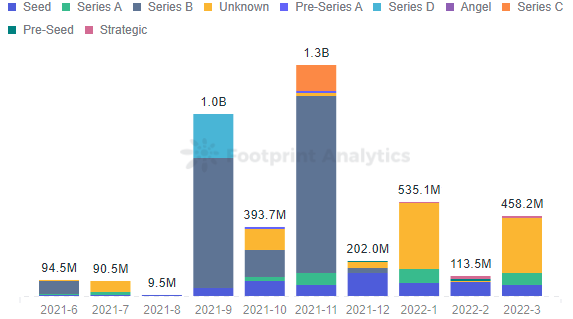 The vision of the game and the completion of the roadmap can also show whether the team has a clear positioning and a clear direction for the future or a Ponzi scheme that just wants to make quick money.

Besides traditional gameplay aspects, blockchain games need to integrate GameFi elements into their design. It may not be easy to copy traditional game systems onto the blockchain.  One example of such a “copy” is Gods Unchained, which is so similar to Hearthstone that players complained about paying to play a similar game without more innovation.

Projects that are more in line with the localized characteristics of the blockchain will be able to gain longevity. Transplanting the gameplay of NFT or DeFi projects will be more efficient to integrate, because the core of GameFi is the design of transactions and token economy.

Innovation is also an important consideration. The market is full of game scripts, where projects can buy an existing code and modify the UI to launch a new game. The only thing that makes a game stand out is the innovation, such as Axie Infinity’s innovative breeding system that constantly stimulates player interaction.

The threshold for game setup is also important for players. There are still a large number of games on Ethereum, but the high gas fees and slow transaction speeds are driving many players away. Instead, players are gathering on chains with lower transaction costs such as WAX, Hive and BSC.

As an integral part of GameFi, some programs use NFTs as “tickets” for players to enter. Players should carefully identify whether the “ticket” paid is a means to quickly gain money, or whether to create their own value NFT.

Although it may seem less relevant for players, the game’s profit model—how profits are distributed into the team’s pockets—is also important. You want to look for profit models that indicate a long-term project, rather than those that hint at a quick payday for the team.

For example, Starshark burned all of the team allocated revenue from launch, a total of 91.43 million SEAs, showing that the team is looking out for the token’s stability rather than lining their own pockets.

GameFi, as its name suggests, is half gaming and half finance, with the tokenomics being the skeleton of the game. The most common way for players to gain revenue is through tokens, in addition to NFT bonuses.

There are single token and multi-token games, with the latter becoming significantly more popular. Games generally include governance tokens and in-game tokens.

The multi-token model allows the project to be more flexible in adjusting the economic model, as the secondary token of the game (in-game token) can take more selling pressure and stabilize the price of the primary token (governance token).

The amount of token issuance, distribution mechanism, vesting period and utility are all key indicators for the future of the token.

Entry to the project using mainstream tokens is a commonly used model, the cost of entry is fixed for players, but the revenue gained is heavily influenced by the token price. For games that use the token issued by the project, using the same token for input and output can ensure a fixed return cycle for users, but may bring FOMO emotion to players.

Therefore, it is very important to stabilize token prices, and projects usually set up buring mechanisms to control supply and demand, and reduce selling pressure by increasing token’s utility. For example, StarSharks has set up numerous destruction methods to control the total number of SEAs issued.

The user data includes the user profile of token holders and the data of user behavior in the game.

The data of token holders can be analyzed in conjunction with the tokenomics. The activity of the token market is reflected in the daily new and active addresses. Token DG of Decentral Games shows a relatively stable trend of new and active addresses. However, the frequent transactions also reflect the fact that players are more likely to mint and sell due to the project’s entry fee being a wearable NFT paid in ETH.

The movements of the whales also impact the fluctuation of the token price. A concentrated sell-off may even cause a token flash crash, so keep an eye on the whales to prevent players from becoming the ultimate receiver.

The first holding address of Decentral Games’ token ICE is the pool on Uniswap, which represents 46% of the total circulation and is not yet fully liquid in the market. But this also guarantees the depth of the pool in DEX and stabilizes the price of swap. 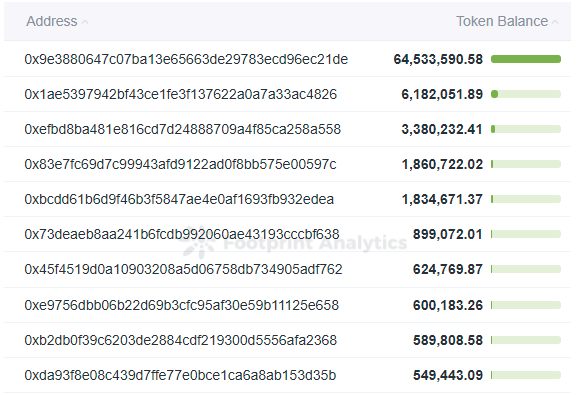 The user data of participating games is more important, most projects depend on the new users to drive the income of the old users, once no new players join the project will quickly fall into the death spiral. Any update of the project will get direct positive or negative feedback from the number of users.

StarSharks, for example, removed its rental marketplace in early April, causing the barrier to participation in the game to rise rapidly and the number of new and active users to plummet.

A project with high retention shows that the project is more sticky to players. Although Bomb Crypto and Mobox on BSC do not have wonderful game graphics and rich playability, but the user retention performance is outstanding, and these two projects are also the current gathering place of P2E players.

It is not an easy task to choose the right GameFi project to invest in. Users need to study data, the team and the game’s tokenomics. There is no such thing as getting something for nothing in the world of blockchain, so do more homework to get more returns.