Concerns have been raised in the crypto community over the upcoming launch of Worldcoin and its alternative approaches to data collection and ‘fair distribution’ of the asset.

Revealed yesterday by American entrepreneur and CEO of OpenAI Samuel Altman, the project aims to give everyone around the world “a free share of Worldcoin in a fair and inclusive way”.

According to Worldcoin, 130k people globally have already signed up and looked into ‘The Orb’ – with ambitions of more than 1bn sign-ups in the coming years already in the pipeline.

Introducing Worldcoin, a new cryptocurrency that will be distributed fairly to as many people as possible.

What has come under fire is its ‘dystopian’ approach towards being able to prove that the receiver is a “real human (not a bot)” without revealing any personal information about themselves.

To tackle this problem, Worldcoin has implemented a hardware device called ‘Orb’ (pictured above) to prove you’re real via a ‘proof-of-personhood’ protocol. According to Worldcoin, this is “a solution to the unique-human problem”.

The nature of Worldcoin’s approach to data collection and proving somebody is verifiably human – much in the same way as a blockchain works – has since drawn heavy criticism across Twitter despite the novel approach used by the project.

The issue of ‘data harvesting’ remains the most prominent. Twitter user ‘Santi.eth’ noted that using hardware of this kind to capture biometric information is “incredibly wrong” and that the project should ” be embarrassed and ashamed for trying to profit with people’s data in countries like Indonesia using this”.

Some users on Twitter have even compared the project to popular futuristic movies such as ‘The 6th Day‘, The Matrix and Minority Report – all of which follow similar themes of a dystopian nature. 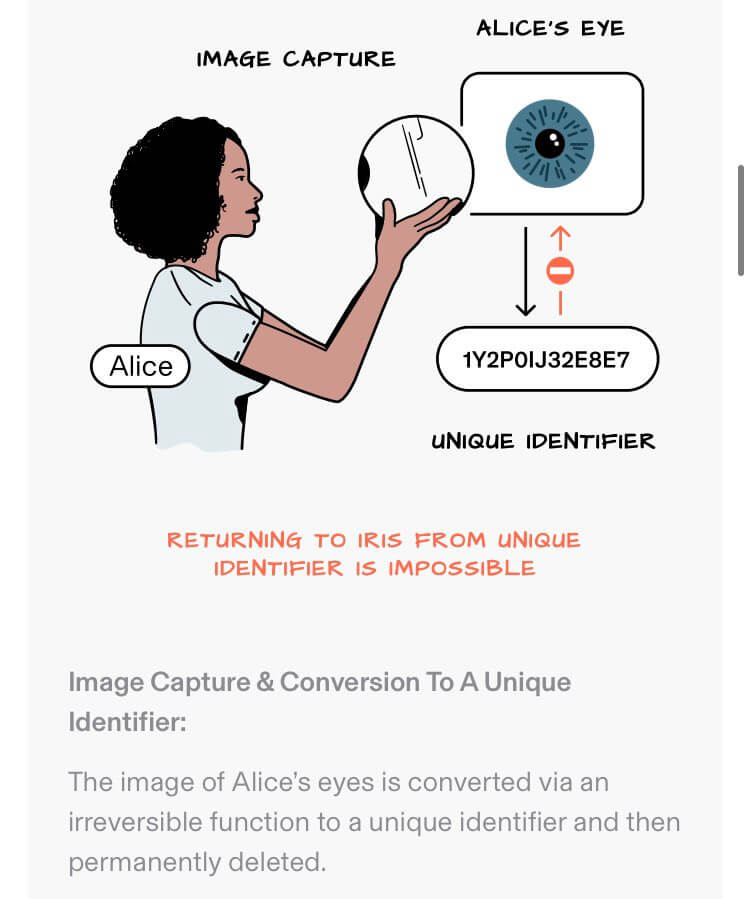 An example image from Worldcoin showing how biometric information is collected

The second concern is how users data will be used – more specifically by third parties.

Although Worldcoin has seemingly confirmed that the image of a person’s eyes will be deleted and converted into a ‘unique idenitfier’ in the form of a hash, a closer look at its privacy policy shows it can share data ‘with third parties who have a legitimate purpose for accessing it’.

This opens the door for a vast array of ‘uses’ for the data, which many feel should be clarified further by the project to ease any concerns.

Eyebrows have been raised over the backing of the project – more specifically from prominent investors within the crypto space.

So far, the project has raised $25m and has a valuation of $1bn. Investors include FTX CEO Sam Bankman-Fried, Coinbase, A16z and Grayscale parent company Digital Currency Group alongside a vast array of notable figures.

Out of the 10b ‘Worldcoins’ available, an estimated 2b (20%) will be used to set up a ‘Worldcoin Foundation’ and allocate tokens amongst investors.

Due to the structure behind the token allocation, users have commented on the lack of ‘fair distribution‘ of the token – something which perhaps goes against the project’s ethos of “fair distribution to as many people as possible”.

Fireblocks integrates Taxbit to streamline crypto tax in US

US President Biden says Jerome Powell will serve his second four-year term as Federal Reserve chair while Lael Brainard is promoted to the vice-chair.

What is the state of crypto regulation in Brazil?

Latest reports suggest that a new law in Brazil will allow workers to accept Bitcoin as salary, meaning the country could soon make Bitcoin legal tender.

What is the state of crypto regulation in Russia?

Despite Russia proposed its first crypto law back in January 2021, crypto market is still looking hazy due to a lack of regulation.