Launched in 2018, EOS was one of the original “Ethereum-killers”.  As one of the early chains, it saw the problems of Ethereum and came up with solutions. However, EOS’s TVL is now ranked 29th.

EOS didn’t break out during the DeFi Summer of 2020 nor the GameFi wave of 2021. Its only notable success is hosting the game Upland, which does have a lot of users. Why did EOS fall to the wayside, and could its connection to Upland be a springboard to becoming a leading ecosystem once again?

In 2018, Block.one launched EOS, which stands for Enterprise Operation System, with a goal of creating an ecosystem that avoids the frequently-cited main problems of Ethereum: high gas fees and congestion.

Led by an experienced team including CTO Daniel Larimer, founder of BitShares and Steem, EOS sought to have no fees and high throughput with a new consensus model of parallel chains and DPoS (Delegated-Proof-of-Stake).

While Ethereum can only process up to 40 transactions per second, EOS can process thousands. And $EOS holders have ownership of the network instead of “renting” computer capacity as in the Ethereum POW model. EOS’s initial plan looked good, but now, four years later, we see that Ethereum is still first, followed by nearly a dozen new chains dividing the market. EOS has clearly failed to deliver on expectations.

Reasons for the EOS’ poor performance include governance issues causing concerns about decentralization, a lack of developers, and the weakness of the entire ecosystem, especially EMD, a liquidity mining project that diverted users’ money after only 13 hours online, dampening user confidence.

To assess what went wrong, let’s look at the data, including DeFi and GameFi projects on EOS based on Footprint Analytics.

EOS’s DeFi ecosystem ranks pretty low among the major chains, with a total TVL of only about $160 million as of May 19. There are no popular protocols on the chain, like Curve or Uniswap.

There are 3 DEX projects that overlap with the WAX chain, and a cross-chain bridge, pNetwork, while the others are only deployed on EOS. The TVL of the largest project on the chain, EOS REX, is only $68 million.

EOS is still dominated by lending and DEX projects. There are only 4 lending projects, mainly led by REX. But REX is still not competitive with other DeFi projects in terms of interest rates, and has no advantage over platforms like Aave and Compound, which are already recognized by the market. 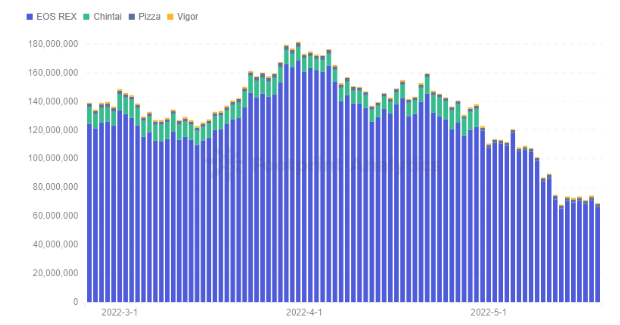 The prices of the various tokens issued on EOS are lower, and smaller projects have worse liquidity and pool depth, which leads to frequent and dramatic fluctuations in prices. Over-collateralized lending projects like Compound are often liquidated when the price fluctuates dramatically. Hence, the EOS ecosystem is not very friendly to lending projects.

As seen by Footprint Analytics, the prices of the native projects on EOS are generally low, with the highest DMD being less than $10 as of May 19, and all other projects have fallen below $2. 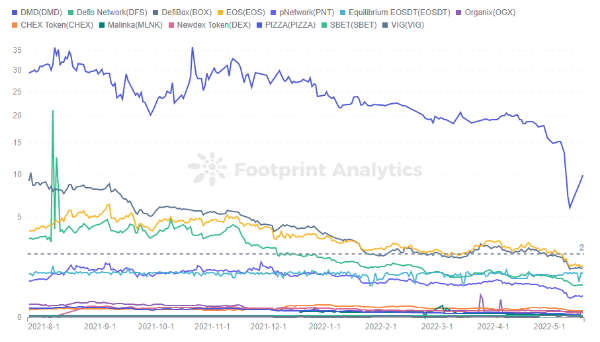 DeFiBox and Pay Cash account for the majority of the DEX projects. DeFiBox is not only a DEX platform, but also aggregates stablecoins and stakes to borrow money. However, the protocols still mainly revolve around swap or stake between EOS and tokens from other protocols on EOS, and without a popular project, the DEX platform’s activity is quite limited. 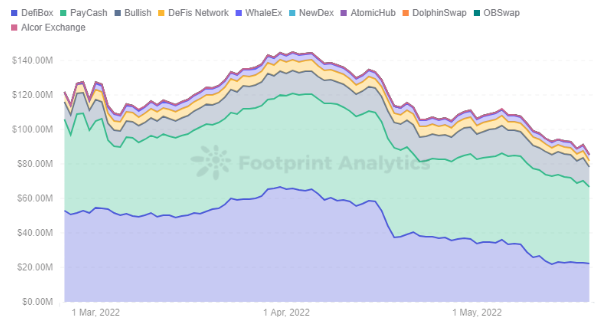 According to Footprint Analytics, the average number of gaming users for EOS is the sixth highest. Ethereum is ranked 14th—at least EOS can say it’s an Ethereum killer in that regard.

EOS has achieved such a result mainly thanks to a property NFT trading game on its chain, Upland, which accounts for 94.78% of users. Users use UPX to buy properties in their favorite cities, and currently cities like San Francisco and Manhattan are completely sold out.

In Upland, users buy properties and collect rent every three hours at a fixed 14.7% APR. Or, users may be able to sell their properties for a more substantial income, with the upcoming NFT-to-USD program, which will allow for the direct exchange of property NFTs to US dollars.

In addition, each city has different collection tasks, and the purchased properties will have additional bonus income when they match the tasks. Players will also receive 500 UPX for free by logging into the game every day.

This ease of play has made Upland a top project not only on EOS but on GameFi as a whole. The GameFi user ranking from Footprint Analytics shows that, while it is the 5th largest game by users, it is still far behind leaders Splinterlands, Alien Worlds, and Farmers World. 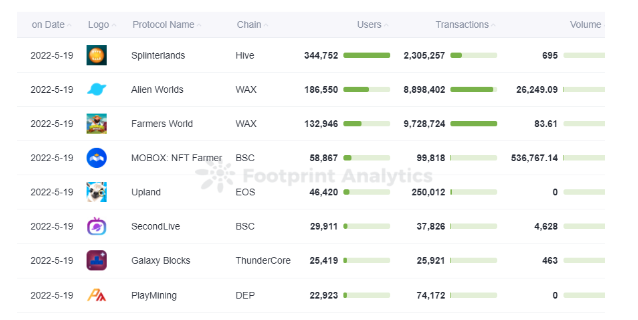 EOS was launched with the inherent advantages of zero fees and fast transaction speed, but still fell far behind in DeFi. This shows that the ecosystem of a chain and wooing developers is just as important as the underlying technology.

However, the GameFi sector has given EOS a chance at survival—as long as it can branch beyond its single successful title, Upland.Data Source: Footprint Analytics EOS Ecology Dashboard

Coinshift partners with Superfluid for their V2 Beta Launch