Last year saw more cryptocurrency hacks than any other year – but the total amount stolen from exchanges has dropped.

A new report by cybersecurity experts Chainalysis found that of the 11 attacks that occurred in 2019, none of them came close to matching the scale of major heists such as 2018’s $534 million Coincheck hack, or even the $473 million Mt Gox hack back in 2014.

The total amount stolen from exchanges dropped sharply to $283 million worth of cryptocurrency despite the sharp rise in attacks, the report states.

It adds: “With no hacks taking in more than the $105 million stolen from Coinbene, both the average and median amount stolen per hack fell substantially in 2019, after having risen each of the three preceding years.

“While the increase in the number of individual hacks should be concerning, the data indicates that exchanges have gotten better at limiting the damage any one hacker can do.” 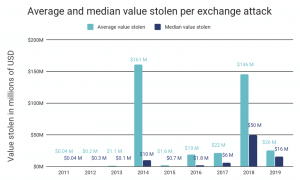 The number of hacks rose but less was stolen

This damage limitation is believed to be down to exchanges keeping a lower percentage of funds in less secure hot wallets, requiring more withdrawal authorisations, and monitoring transactions more closely for suspicious activity.

Exchanges are also more willing to come forward when attacked and share details with the rest of the cryptocurrency community – making it easier to track down stolen funds.

The Chainalysis report also states the majority of funds stolen in exchange attacks end up being sent to other exchanges, where they’re likely converted into cash.

However, a substantial portion of funds sit unspent, sometimes for years. In those cases, there may still be an opportunity for law enforcement to seize the stolen funds.

AMC theatres to accept Ethereum, Litecoin and Bitcoin Cash alongside Bitcoin by end of 2021

AMC CEO Adam Aron said on Twitter that the company expects to accept ETH, LTC and BCH - Much to the disdain of the Dogecoin community

Ukraine president Volodymyr Zelensky has said the launch of a legal digital assets market in the country is of 'utter importance'.

To celebrate "Bitcoin Day" in El Salvador on September 7, an array of global Bitcoin communities have pledged to buy $30 in BTC.