The token’s name is derived from a meme surrounding the fact that influential financier Jeffrey Epstein was found dead in his prison cell after committing suicide on August 9 while awaiting trial for child sex trafficking.

The medical examiner ruled the death a suicide, but many people, including Epstein’s lawyers, have disputed that conclusion.

The Ethereum-based ERC-20 token will be airdropped on Friday and listed on McAfee’s new decentralised exchange – McAfee DEX. 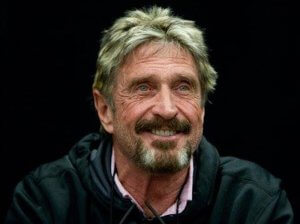 He said: “The man was six-foot-one, he hung himself from a bed that was only five-foot-seven in a manner that managed to break his neck in multiple places similar to someone being physically strangled.

“His cellmate was taken from his cell six hours before his death, the video cameras were off, and the guards in that cell block were sent home early due to cleaning.

“You add all that stuff up, and I don’t see how a suicide is possible.”

Epstein, who ran a business out of the US Virgin Islands, was known for his friendships with the likes of Bill Clinton, Donald Trump, and Prince Andrew.

In 2007, Epstein pleaded guilty to charges of solicitation of prostitution and procurement of minors for prostitution in Florida.

British-born McAfee, 73, is on the run from US authorities for tax evasion. He founded his own anti-virus protection company – McAfee – in 1987. McAfee left his role as chairman in 1994 and sold his shares for approximately $100 million.