Since the start of September, Bitcoin Cash (BCH) has been attempting to recover from a substantial downtrend that hit the entire cryptocurrency market hard over the summer.

At the time of writing, Bitcoin Cash is trading at around $307 after a relatively stable week.

Overall, BCH has rallied about 16% since the start of the month after recovering from a drop down to $270 towards the end of August.

Is the altcoin market showing signs of recovery? Will BCH continue to consolidate or start a new trend upwards?

Let’s take a look at the chart. 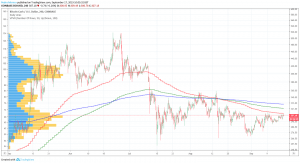 Looking at the chart above, we can see that the price of BCH recovered during early August before crashing twice towards the middle and end of the month. Unfortunately, the gains of early August were lost and the price came crawling back down to below $300 in September. At its lowest point during the past month, BCH touched $270 before recovering almost immediately to the $300-$310 level.

Since the start of September, we can see price has slowly been creeping back up, although it still hasn’t tested any of its EMAs. We can also see that the EMAs have inverted – a clear bearish signal for most traders and analysts.

However, with Bitcoin also consolidating in an upwards direction, there’s potential that BCH will start testing its EMAs soon. The chart clearly shows higher lows since BCH touched $270, a sign of strength and an early bull signal. I argue if price starts bouncing between the 200-day and the 50-day EMAs, we may see Bitcoin Cash recovering towards previous yearly highs.

BCH volume also took a plunge to around $1 billion at the start of the month, but had recovered to around $1.4 billion last week. It’s now sitting around $1.25 billion, showing there’s some sell pressure yet again that could potentially increase volatility.

In August, I mentioned I expect BCH to touch $360 sometime this year if it keeps up its momentum. I’m still positive that that target will be reached.

Nevertheless, be prepared for sudden moves towards $280 and down to $258. To go any lower, BCH would need to break most of its price walls – something I don’t think will happen.

I recently spoke with Bitcoin Cash’s strongest advocate, Roger Ver, and discussed the most recent developments on the horizon for BCH. You can find all the details here, but the most juicy news seems to be the recent spike in adoption due to the implementation of smart contracts. Roger, like myself, believes key components for mass adoption are speed and flexibility. What Bitcoin Cash Oracles offers is a way for any user to easily deploy an “escrow” transaction that can be used to trade globally – without the hassle of trusting the other party.

I personally think these “trade escrows” will be key in terms of adoption, especially for work-related tasks. In a way, they do enable milestone-based funding, which may be the new and better way of conducting ICOs instead of simply creating an extra layer of complexity with STOs that require KYC and accreditation – something that goes against what we should be promoting within the crypto ecosystem.

Current live BCH pricing information and interactive charts are available on our site 24 hours a day. The ticker bar at the bottom of every page on our site has the latest BCH price. Pricing is also available in a range of different currency equivalents:

Bitcoin Cash was born out of the idea of making Bitcoin more practical for small, day-to-day payments. In May 2017, Bitcoin payments took about four days unless a fee was paid, which was proportionately too large for small transactions. A change to the code was implemented and Bitcoin Cash was born on 1st August 2017.

If you want to find out more information about Bitcoin Cash or cryptocurrencies in general, then use the search box at the top of this page. Here’s an article to get you started:

Bitcoin SV (BSV) is currently trading at around $257 after a huge 19% drop since last week. BSV has fallen significantly over the last 24 hours, losing around 9%...

Litecoin (LTC) is currently trading at around $55 after a 5% drop in price over the last 24 hours. Litecoin experienced exponential growth during the summer of 2019, hitting...

At the time of writing, Ethereum (ETH) is trading at around $167 following a whopping 11% increase in price since last week. Over the past 24 hours, ETH has...