Ethereum (ETH) experienced a 5% rally to the upside last night and has been gradually building over the day, with price rising from $170 to around $182

Ethereum (ETH) was propped up by a 5% rally to the upside overnight and the positive momentum has continued throughout Tuesday, with price rising from $170 to the $182 level of resistance.

ETH remains in a more bullish posture than before the weekend, but it ideally needs to break above the 100 EMA on the four-hour chart – which is also residing at $182 – for price action to remain positive.

A bullish break above this level would signal a short-term reversal pattern, with upside targets coming in at $188 and $196.

The $196 level was used as support three times in July before finally breaking down in August. This suggests that it could be quite a stern price point to break over the coming weeks.

The four-hour RSI also hit 67 overnight – its highest point for a month – before falling back down to 63. This suggests that the upside move may need to take a break before attempting to push higher. 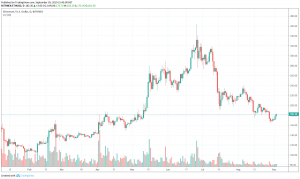 Bitcoin is currently trading in a consolidation zone around $35,000 after the volatility of Monday’s session begins to subside. There is still a series of hurdles that Bitcoin needs...

Ethereum is currently trading back around the $1,100 level following Monday’s 20% correction to beneath $910. The world’s second largest cryptocurrency remains bullish on all higher time frames with...