Over the last 24 hours, Ethereum (ETH) has experienced some positive momentum, rising around 7% in price to trade at $182 at the time of writing

Over the last 24 hours, Ethereum (ETH) has experienced some positive momentum, rising around 7% in price from $169 to trade at $182 at the time of writing

Ethereum is attempting to recover from a downtrend which saw the coin suffer heavy losses towards the end of last month. ETH touched $225 during mid-September before plunging to $150, a 34% loss.

Will Ethereum’s recovery continue? Or will it plunge towards yearly lows?

Let’s take a look at the chart for Ethereum. 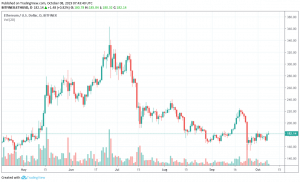 Over the course of September, Ethereum was seemingly well on the road to recovery following a tough summer, with price finally rising above all three of its EMAs for a brief moment.

However, accompanying the wider market downturn towards the end of the month, price has since come crashing back down. ETH has been attempting to consolidate and recover since the market meltdown but is struggling to hold on to any gains.

I argue the Ethereum market needs some fresh cash coming in for ETH to rise above $200 again given the current volume profile.

Until Bitcoin breaks some serious levels, around $12,000 and then $14,000, I don’t see altcoins pumping to new yearly highs.

Of course, I could be wrong, and the markets could start pumping way before the Bitcoin halving or the release of ETH 2.0 in January 2020.

Earlier this month, during a major crypto-conference, Ethereum founder Vitalik Buterin mentioned how most things are finalised in regards to ETH 2.0 and clients are talking to each other already. I therefore personally believe we can expect a testnet release of the new Casper PoS models by the first half of 2020 at the latest.

With the upcoming Libra project – a currency envisioned by the Facebook team – there will be extra pressure on Ethereum to develop as both have similar goals in terms of smart contract functionality. That’s of course assuming that Libra is even released at all, as Facebook may not move forward with the project given the recent pressure from governments and regulators. Recently, Germany and France both flexed their muscles in an attempt to ban the social media platform’s currency.

For now, investors have been storing their remaining value in BTC, as Bitcoin is still close to 90% domination according to some sources.

My analysis is that BTC is still in a bull market, and soon enough, the top altcoins will be as well.

For now, I would aim at making minor entries while price is below all EMAs. Volume seems to be consolidating since last week and is now close to $7.6 billion – a sign of recovery.