At the time of writing, Ethereum (ETH) is trading at around $174 following a 7% drop in price since last week.

The world’s second-largest cryptocurrency by market cap has been consolidating to the downside over the past few days, as most altcoins have been doing lately.

As mentioned last week, Ethereum was in a clear consolidation downtrend towards the end of October after making a number of lower highs since mid-July when the coin suffered a massive drop.

Despite a sizeable pump towards the end of October following Bitcoin’s 40% jump in the space of 24 hours, it would seem that the downtrend has now returned.

Will ETH recover? Or will it plunge back towards $160 and below?

Let’s take a look at the chart for Ethereum. 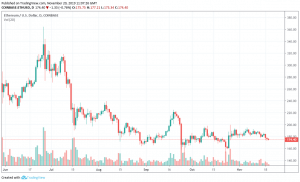 Over the course of October and November, ETH has been making a number of lower highs – not a great sign for the bulls.

During the second half of the year, ETH has been attempting to consolidate and recover following the huge market downturn in the summer.

Up until the end of October, it was struggling to hold on to any gains.

Then, out of nowhere, a pump pushed price towards the 50-day EMA, blasting through a big volume resistance wall near $170 just three weeks ago.

However, the downtrend has returned and ETH is currently back below all its EMAs, and price is looking likely to fall further.

On a more positive note, earlier this month, during the major crypto conference Devcon 5, Ethereum co-founder Vitalik Buterin mentioned how most things are finalised in regards to ETH 2.0 and clients are talking to each other already. I therefore personally believe we can expect a testnet release of the new Casper PoS models by the first half of 2020 at the latest.

My analysis is that BTC is still in a bull market, and soon enough, the top altcoins will be as well.

For now, I would aim at making minor entries while the price is still below the 200-day EMA. Volume-wise, ETH is hovering close to $7.7 billion.

Litecoin on its last legs as $55 support weakens

Ethereum is on the brink of a major breakout after continuing to close daily candles above the crucial $257 level of support. It has now closed four of its...

Gold has rallied to a seven-year high of $1,682 as fears surrounding a potential coronavirus pandemic continue to build. The tremendous seven percent rally over the past five days...

Bitcoin has formed a second consecutive lower high on the daily chart following a gruelling rejection from the $10,000 level of resistance. After surging to $10,500 on February 13,...