Lightning Spin, a roulette game built on top of the Lightning Network, has been sold

Rui Gomes, the creator of the Lightning Spin gambling game, has confirmed the Lapp has been sold for an unspecified amount

The Lightning Spin roulette game may be less than a year old, but it has seen steady growth in that time. Now Rui Gomes, the creator of the Lightning Network application (Lapp), has announced its sale in a Medium blog post.

Gomes first released Lightning Spin roughly nine months ago as a prototype. Its aim was to bring more awareness to the Lightning Network and how it settles microtransactions.

The Lightning Network is a Layer-2 scaling solution designed to enhance Bitcoin’s transaction throughput. It operates on top of Bitcoin by opening payment channels through which transactions can be routed.

How does Lightning Spin work?

The purpose of Lightning Spin was to help the average person understand how the Lightning Network can facilitate micropayments.

The game is a relatively simple roulette gambling application, and users can designate a fixed amount of satoshis to gamble with.

For example, users could stake 1,000 satoshis with a target of 3x. If their spin is successful, they would be awarded 3,000 satoshis. Fundamentally, it is no different to a roulette game at a casino.

Speaking on the launch of Lightning Spin, Gomes states: “At the time, the Lightning Network was fairly small, with only about 25 BTC (Bitcoin) in network liquidity, and a lot of people didn’t understand the concept of channel balancing, which resulted in hundreds of support requests being generated.

“Still, people kept spinning, learning, and getting their payouts through Lightning.”

Within six months, Lightning Spin became “one of the go-to Lapps where people would try out their new wallets and have fun playing with some sats (satoshis)”.

The app then hit 10,000 settled invoices through the Lightning Network, which is roughly enough to fill three full blocks of Bitcoin transactions.

At the time, Gomes tweeted: “Can you imagine the network behind the world’s soundest money being clogged up for 30 minutes because of a side-project? Lightning is proper scaling.”

https://t.co/sDriH0vXro just hit 10,000 paid invoices.
If these were on-chain txs, they would've filled up ~3 blocks.

Can you imagine the network behind the world's soundest money being clogged up for 30 minutes because of a side-project?

Gomes has decided to sell the app to focus on other projects, namely OpenNode, Lapps.co, and other Lapps he has in the works.

Upon revealing that he had sold Lightning Spin, many flocked to Gomes asking if he had sold it to the controversial Roger Ver. He tweeted out:

“No, I didn’t sell it to Roger Ver. I declined a lot of better paying offers. I made sure the new owner’s vision is similar to mine. The site will remain Bitcoin and Lightning-only under their ownership.” 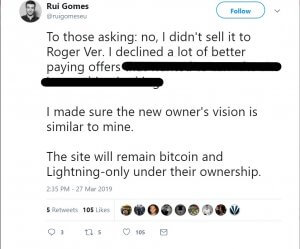 While Gomes has revealed that Lightning Spin was sold to somebody who shares a vision similar to his own, he has not disclosed how much the Lapp was sold for.

Visa takes an epic leap into fintech – will acquire Plaid for $5.3bn

In a surprise announcement yesterday, payment processing giant Visa revealed it is acquiring fintech unicorn Plaid for an eye-watering $5.3bn. In the first milestone acquisition of the year, Visa’s...

Happy New Year to all our readers!

As we enter a new decade, the team at Coin Rivet would like to wish you a happy and prosperous year ahead. We look forward to bringing you the...

The team at Coin Rivet wishes you a very Merry Christmas. We hope you have a great day, however you spend it. Thank you for choosing Coin Rivet as...