Litecoin continues to look bullish despite consolidating after the rally on April 1. Having established support at $70, LTC looks like it may re-test $100 in the coming weeks

Cryptocurrency’s fifth largest coin in terms of market cap – Litecoin – has established a key level of support at $70 following a 225% move to the upside since the turn of the year.

Litecoin rallied from $60 to $100 on April 1 before eventually losing momentum and consolidating at the $70 mark.

Holding this current level will be key considering Litecoin hasn’t traded above $70 since the breakdown in price in August 2018.

During the 2017 bull-run, Litecoin was one of the top performing cryptocurrencies, rising an astonishing 9000% while reaching an all-time high of $420.

With this in mind, if Litecoin can break out of the psychological $100 level of resistance, it could be primed to see a tremendous move to the upside in Q2 and Q3 of this year.

A break above would also demonstrate the end of the ongoing bear market, with some suggesting that the first phase of a bull market will come into fruition over the coming weeks and months.

One of the technical reasons behind the rally on April 1 was the golden cross on the daily chart. This saw the 55 exponential moving average (EMA) move above the 200 EMA, which is an example of short term momentum ticking above the long term trend.

The unprecedented amount of volume seen on April 1 was a clear demonstration of a rise in open interest in the cryptocurrency markets, with Litecoin in particular exceeding expectations.

Several traders have been proposing that the recent consolidation from $100 to $70 is an example of a bull flag, a measured move which would see Litecoin test the $110 level of resistance.

While the recent market rally has quite clearly been bullish, it’s easy to forget that this asset class is still firmly rooted in a bear market.

For a bull market to enter its first phase, Bitcoin needs to lead the way by taking out the seemingly impenetrable $5,900 level of resistance.

If Bitcoin can do this with conviction, it will most likely cause altcoins to rally to levels not seen since 2018.

During the 2017 bull market Bitcoin was a market leader, rallying exponentially before capital flowed back into altcoins. 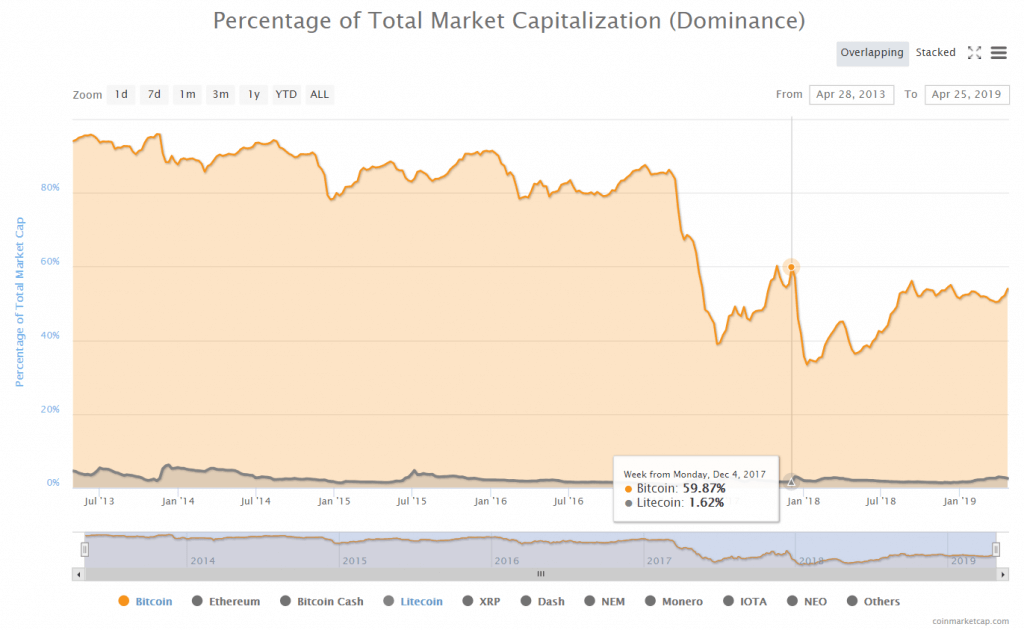 In the process, Bitcoin dominance rose to around 64% before falling to 32% as the highly-anticipated ‘alt season’ began to take hold.

This time around, altcoins will need Bitcoin to consolidate above $6,200 before an entirely bullish scenario plays out.

If price falls to these lows, the ongoing optimism and bullish sentiment will wither away. It will also demonstrate a change in behaviour from investors and traders which will cause a new phase of the bear market.

Bear markets have a tendency to cause the maximum amount of pain to as many traders as possible. The fact that no news or fundamental catalyst caused the recent move to the upside could be an indication that the market is still too immature for a bull market comparable to 2017.

A rejection from $5,900 for Bitcoin could also cause a capitulation low for a number of altcoins, with Litecoin potentially falling to below $20 while Ethereum could fall below $75.

Litecoin’s relative strength index (RSI) reached its highest point since December 2017 at the start of April, topping out at 86 before falling to the historic support zone of 44 on the daily chart.

The recent bounce from $70 to $73 has seen the RSI point upwards for the first time since the initial consolidation at the start of the month. This suggests that momentum is re-entering the market following a period of bullish exhaustion.

If Litecoin can begin to pick itself up and test the $100 level, the RSI would also move up into a bullish control zone.

The daily schocastics have also crossed over for the first time in a few weeks which could suggest that a short term bounce may come into fruition.

How DustAid is using cryptocurrencies for charitable causes

The price of Ripple’s XRP token continues to stagnate in a bearish posture in spite of its position as the fourth largest cryptocurrency in circulation. XRP, which now has...

Bitcoin endured a turbulent weekend of price action after falling to as low as $8,670 before bouncing back to the $8,830 level. The plunge in price comes after a...

Ethereum has flashed a sell signal overnight as it lost the $203 level of support, with it now acting as a point of resistance. The sell off coincided with...