Brainchild of Brian Marcel and masterminded by Thomas Power with support from Jonny Fry, the social event had been designed to bring together a handful of blockchain enthusiasts for discussion and networking.

However, within hours of sending out invitations, the meeting – which had been initially intended as “a one-off” – was massively oversubscribed.

“I posted on LinkedIn, Twitter, and Facebook about a small blockchain dinner for 20 people sponsored by Brian and suddenly got 250 people writing to me on WhatsApp,” explained Mr Power.

“It was a shock, and I had to move fast to manage them all.

“After 10 days, 256 members were inside the group and it was full – I then created a ‘Dinner Queue’ group and now that has 70 waiting to join.”

The huge demand has now left organisers arranging the highly popular initiative as a monthly event, together with other themes aside from blockchain.

“I think this is because people are being overwhelmed by waves and waves of technology.” 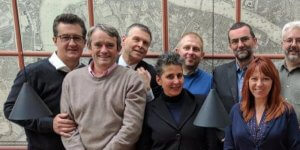 The response has been so overwhelming that the organisers are also considering the possibility of not just restricting them to London.

“We’ve been approached by large sponsors – major global brands – so it’s certainly an opportunity to consider.”

Sponsoring this evening’s event is Brian Marcel, owner of IT solutions provider IBCS, who hoped the dinners would encourage knowledge exchange.

“We want to raise the awareness of blockchain amongst the enterprises who are missing out because of all the fog caused by cryptos,” he said.

“Blockchain is the new barcode and, where we used to take the mystique out of barcodes and help companies implement the technology, we can do the same with blockchain.

“This is a great forum to exchange knowledge and get access to the corporates and use the combined brainpower to make it all happen. Plus it is great fun.”


The future is a blended solution of half-fiat and half-crypto, but it must be given time

Linda Lu from Oasis Ecosystem said there will be a new economy in Web3, where individuals can own their data, and control how it’s used.

Global payments platform Checkout.com is keen on strengthening its position within the Web3 space following a $1bn Series D fundraising round.