DOMINIC FRISBY: "You can’t get a 90% fall in a day, and then expect the bear to walk away - bears like to sit on you, look you in the eye, squeeze you, mock you and taunt you"

Folks, I am cautiously optimistic.

We are not buckling up for a trip to the moon or anything like that. My only concern at this stage is that the low is in.

I’m not like these young whippersnappers who’ve only ever seen markets go up. I’m a grizzled old hack who has lived through many a bear market in speculative assets. DotCom – that was shortly after this thing called the internet was invented and everyone got very excited about it. I know – can you believe it? There was a time before the internet. The 2008 financial crisis. The mining bubble. The early days of crypto, when Bitcoin fell from $32 to $1 – how about that for a crash? I was there for all of them.

I know what can happen in bear markets. I know what these vicious, uncompromising beasts are capable of. So, while others may be thinking in terms of repeats of 2017, my hopes and dreams are rather more modest. All I’m looking for is a low. A low and some sideways action. That would do me.

That seems to be what we are getting, and we should be glad. Believe me, a year of sideways action, so boring you’d rather go and write some code that counts sheep and then challenge the code to a sheep-counting competition, is preferable to what this bear market is capable of, given the speculation which preceded it.

A bear needs two things before it will walk away: a correction in price and a correction in time. You can’t get a 90% fall in a day, and then expect the bear to walk away. Bears like to sit on you, look you in the eye, squeeze you, mock you and taunt you. They want to get you into the kind of mental state where you never want to buy a speculative asset ever again. Instead, you want to move to the country and live quietly.

When he’s finished, he doesn’t get up and loudly walk away, while elsewhere the trumpets sound. Rather, he surreptitiously walks away in the dark of the night. You’re so beaten up you don’t even notice. That’s how bears end.

The trumpets only sound for false dawns, not for real ones. Beware of trumpets. Them and headlines.

Getting away with it?

So price and time. These are what the bear demands.

We have had roughly a 90% correction in most altcoins. Ethereum, for example, went from $1,420 to $170. That’s about 88%. Is that enough? Or does it need to be 95%, or 99%, with most coins ceasing operations. Given what I know about bear markets, if this is to be a proper bear market, we need more “ceased tradings” and 99% wash-outs. Price-wise – and it may not seem like it if you are on the wrong side of the trade – I’d say we might have got away with it, but if we have we are lucky.

Then we come to time. This is not mining. Bear markets in mining can go on for 10 or 20 years. It’s tech. Everybody who works in the sector is young. The whole process will happen more quickly. But even the DotCom bubble took two and a half years to wash out. This one has only been nine months.

Given the extraordinary year that was 2017, we need a bigger correction in both price and time than we have had. But the signs are we have made a low.

So here’s what I think. If we really have made a bottom, then 2017 was not the really big bubble in crypto. It was just one of many mini bubbles on the way to a much bigger bubble. And the really big bear is still to come as well.

Let’s just comment on the price action before I go. Looking first at Bitcoin. It has ranged over the past week between about $6,200 and $6,500. It is flat. Volatility has gone. A couple of months it has been like that.

The altcoins, for the first time in what seems like an age, have actually started outperforming Bitcoin.

Below, we see Bitcoin Cash, which I’ll use as a proxy for altcoins, with, beneath it, Ethereum, Litecoin, EOS and Cardano, which have all traced out similar patterns.

The red line marks the low. You do not want to be long if we go below that mark. The blue sloping line is the 55-day simple moving average. This shows the trend of the last 55 days. You want to see the price above that line, and that line to be flat or sloping up.

Bitcoin Cash had quite a spike up over the weekend. It has spiky tendencies. But the signs are good. 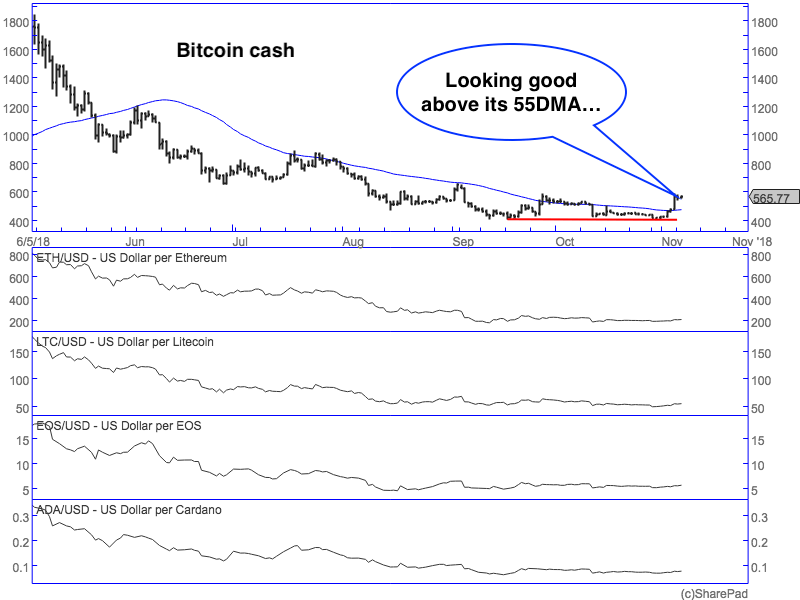 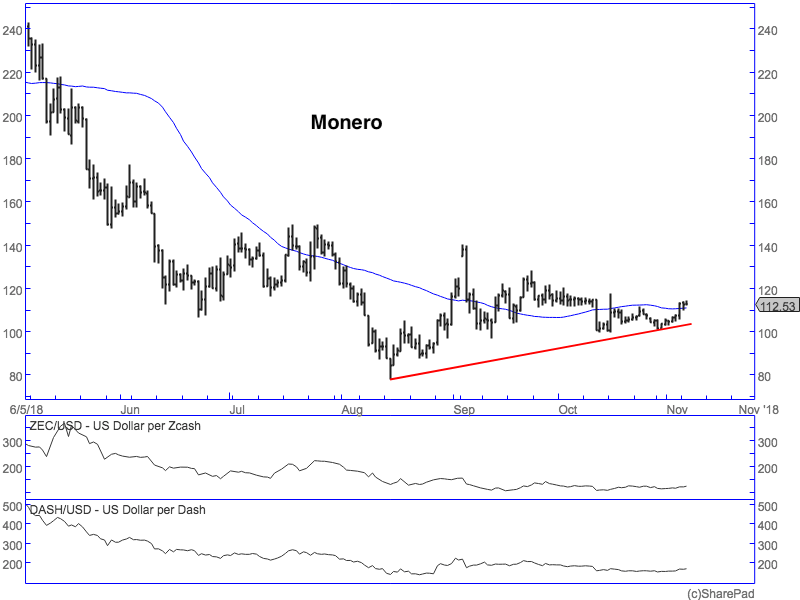 You guys might want a rally to the moon. I’ll take a low. And I’m cautiously optimistic that we have one.

Fall below the August-September lows, however, and things get dodgy again.

Dominic Frisby is author of the first (and best, obvs) book on Bitcoin from a recognized publisher – Bitcoin: the Future of Money? – available from all good bookshops, and a couple of rubbish ones too. Follow Dominic on Twitter – @dominicfrisby

AmaZix teams with Securitize to bring digital securities into spotlight