Sponsored Metis DACs: Next-generation DAOs and the perfect solution for the metaverse

Metis shows their new product and the next generation DAO

There is no doubt that the metaverse will change the world as we know it. But few people fully comprehend the metaverse’s full vision.

A vital aspect of the metaverse will be a functioning economy, where people may buy, sell, and invest, built on top of the real-world economy. The metaverse will also be decentralised. Anyone anywhere in the world will be able to access, create, and interact with content without the need for a third-party authority.

Decentralised Autonomous Organisations (DAOs) have some potential as the operating systems of the entire metaverse. DAOs provide a governance structure that allows decentralised communities to vote on critical business decisions on Web3 platforms, without the intervention of an intermediary.

But DAOs are not a perfect fit for the metaverse, because their operations don’t extend beyond voting and governance. This is why Metis has created the next generation of DAOs: Decentralised Autonomous Organisations (DACs).

Back in 2014, Ethereum founder Vitalik Buterin proposed the concept of DACs. For seven years, no one did anything about it. Today, Metis is finally setting Buterin’s vision into motion.

The fundamental challenges of the Web3 world are scalability, security, and decentralisation — collectively called the Blockchain Trilemma. When it comes to building highly secure and decentralised networks, Ethereum is the gold standard… but transactions on Ethereum are too slow and too expensive for dApps to scale. Meanwhile, numerous Layer-1 networks have emerged to try to challenge Ethereum with fast and cheap transactions… but always while compromising on the vital features of security and decentralisation.

Metis has built a solution that addresses all three elements of the Blockchain Trilemma. As an Optimistic Rollup, Metis bundles together large numbers of transactions submitted on Ethereum Layer 1, then processes them all together, making each transaction processed on Metis’ Layer 2 Andromeda network far faster and cheaper to execute than they would be on Ethereum Layer 1.

Metis DACs and the metaverse

The Metis DAC model is a governance structure that assists in managing and incentivizing autonomous and decentralized communities. Metis DAC governance structure differs from DAOs, since DAOs focus solely on voting and governance. By contrast, Metis DACs are designed to function as fully operational companies with business-related tasks such as payroll, marketing, messaging, insurance – all of the functionalities you see in a ‘real world’ company.

Metis DACs also enable assigning special permissions or role delegation to different participants, allowing everyone to have a different impact on business decisions. This role delegation complements another DAC feature that allows other DAC participants to assess the roles of other members in the ecosystem. Starting in Q1 of 2022, Metis will roll out all of these features, as well as numerous DAC templates, enabling everyone from existing blockchain companies to huge non-blockchain companies to 10 friends who want to trade NFTs with each other to reap all the benefits of operating on the secure Metis network.

In Q1, Metis will roll out its dedicated storage layer, which will serve as both a cheap and secure way to store large blocks of data such as NFTs, and turbocharge Metis’ scalability, dropping gas fees on Andromeda down to just a few cents – payable with the $METIS utility token.

A highly scalable entity that enables high levels of scalability, easy-to-manage Reputation Power and permission functions, and a full open-source toolbox providing the very same kinds of ERP and CRM software, messaging, payroll management and other tools needed to run any company. All of these features position Metis to become the home of thousands of decentralized businesses, and for Metis DACs to form a hub for both the Web3 economy, and the metaverse. 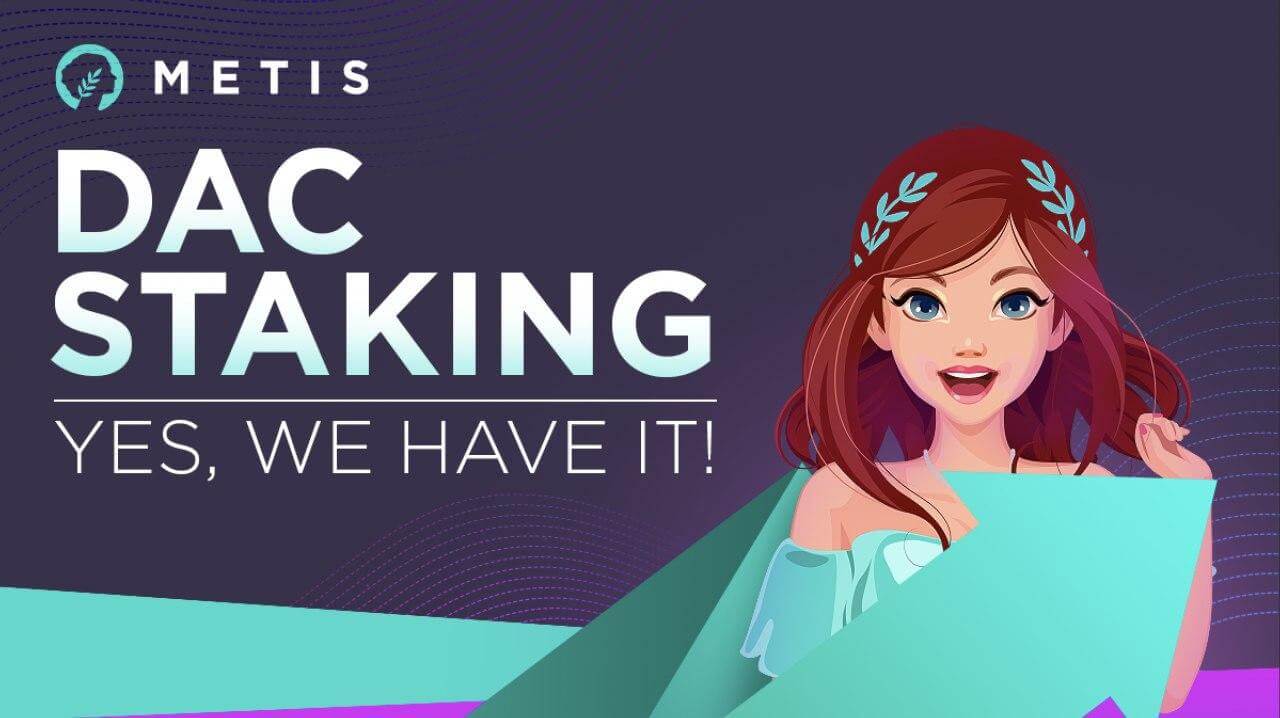 As with any major technological breakthrough, Metis DACs will roll out in stages. The first stage launched recently, in the form of a staking program. By simply connecting your MetaMask wallet and transferring assets to the Metis Andromeda network, users can form their own DAC and stake $METIS tokens for $METIS token rewards in a few minutes. The APY offered in the staking program is simply the way in, however.

With more than 600,000 $METIS tokens bridged to Andromeda in the month since the network launched and the staking program seeing rapid adoption, the Metis community will gradually learn the benefits and ease of use of DACs. It won’t be long before the rest of the blockchain world catches on.

For now, the metisverse. Soon, the entire metaverse.