Momentous proof of keys celebration is coming on January 3rd

TRACE MAYER: "Not your keys, not your Bitcoin"

Trace Mayer is supporting a “proof of keys celebration” that entails withdrawing all Bitcoin held with trusted third parties.

He states that the proof of keys celebration, to be held on January 3rd, will declare monetary sovereignty as he looks to kick-start a new annual Bitcoin tradition.

“We’ve got lots of new people who have come into the community, and I think it’s important to declare and redeclare our monetary sovereignty on a regular basis,” he said in a video posted on Twitter.

“Every January 3rd, the Bitcoin community HODLers of last resort participate in a proof of keys celebration by demanding and taking possession of all Bitcoins held by trusted third parties on their behalf.”

The concept for the celebration originated from Reddit user ‘Satoshi’. He/she explained that “By demanding and taking possession of their assets, individuals will learn real fast with blockchain proof whether they are part of the elite HODLers or not. Proof of keys is the annual HODLer initiation.” 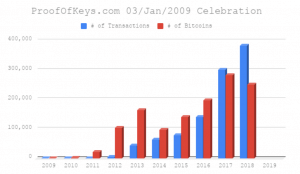 At the time of writing, no major exchanges have commented on the annual tradition. You can assume that they won’t be supporting it however, as any funds being withdrawn would most likely be from their liquidity holdings (as trusted third parties).

January 3rd could now be the perfect day to target long or short squeezes on leveraged exchanges. If people are withdrawing funds, then you can assume that significant exchange liquidity could be drained over the proof of keys celebration. It will also be interesting to see what happens on January 4th. Will people immediately deposit funds back to exchanges as they go looking for leverage and margin trading opportunities?

If you’re holding on to your own private keys, by definition you would be spot trading (with zero leverage).

Mayer invited anyone interested in participating in the event to fill out a form on the proof of keys website. At the time of writing, more than 70 people have filled out the form, including crypto personalities such as Stacy Herbert and Tuur Demeester.

This event will also be “the ultimate stress test,” Mayer concluded, given that the movement of coins would result in a large number of transactions during the day. “Companies and exchanges must prove their trustworthiness and consensus.”

Toby Simpson: How Artificial Intelligence will improve all our lives

The bear market emphasises what blockchain is all about: TRUST

Blockchain won’t work for most enterprise use cases, here’s why…

Intelligent transformation of the financial sector

Blockchain heading for the moon