New year prognosis: The crypto market hangover may continue for years to come

DOMINIC FRISBY: "My prognosis has been that Bitcoin will make its low within 12 to 18 months after making its high. It will then retest that low. It will then travel sideways with a slightly upward bias for the next three years after that"

Hello and Happy New Year to all our readers!

In this column, I conduct some price analysis of the crypto markets and, as it’s my first column of the year, I should really give you my outlook for the year.

Bitcoin peaked at $20,000 in late December 2017, as we all know, and the rest of the sector peaked about a fortnight later. 2017 in crypto was one of the most astonishing speculative manias in all recorded history. If you subscribe to the argument that Bitcoin was not the bubble but the pin, then we will likely see another such speculative frenzy before too long.

If, however, you’re of the belief that this was a typical bubble around a new tech, rather like the excitement over 3D printing a few years back or even dotcom in 2000, then we won’t see new highs for many years to come.

If you subscribe to the third view that Bitcoin has no utility whatsoever, and that it’s a great big noise over nothing, then why on earth are you reading this? With this view, Bitcoin is going to zero no matter what.

I’m somewhere between arguments one and two. Crypto is not going to replace fiat money, but its market cap could, eventually, grow to be bigger. This is a pure scalability issue. A currency is limited by national boundaries. Even the US dollar is limited. Those who are unbanked – some 2 billion people or more – cannot use it. As the borderless money of the internet, Bitcoin has the ability to scale into something far bigger. All you need to use it is an internet connection.

Money and tech have always been related. They evolve together. When ways were found to cast coins – thereby certifying the metal content – and stamp them with the head of the issuer to authenticate them, so did primitive forms of money find less use. When the printing press was invented, so did paper replace metal – and so on. Blockchain is the most exciting financial technology since money went digital in the 1980s and 90s.

That said, 2017 was a frenzy like no other. It will take many years to wash out.

Then again, Bitcoin has had at least four “frenzies like no other”, so in a way, 2017 was par for the topsy turvy course.

My prognosis has been that Bitcoin will make its low within 12 to 18 months after making its high. It will then retest that low. It will then travel sideways with a slightly upward bias for the next three years after that. I’m looking for a repeat of 2013 to 2016, basically, though on a slightly bigger scale. It’s certainly a possibility, and it means we should see our first low before June.

As a result of mentioning 3D printing, I was persuaded to go back and have a look at the price action of some 3D printers. What I found was telling.

3D printing is one of those new technologies with an astonishingly powerful narrative. We will all have 3D printers in our homes eventually, and when we want something, we will simply order the design online somewhere, download it to our printer, and it will duly print up the item in question. It threatens to change manufacturing as we know it, not to mention transport, delivery, and customs and excise. In China, already, 3D homes are being printed at less than $10,000 each. Who is not going to get excited about a story like that? Around about 2010, the narrative took hold and there was a tremendous speculative frenzy.

Here is the price action of 3D Systems (NYSE:DDD), one of the biggest companies in the space. 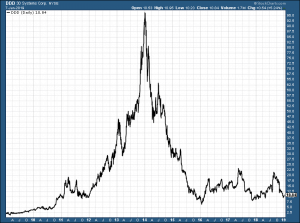 But then the declines started. Two years later, in early 2016, we were back below $8. All those gains were given up. It then spent the next three years meandering between about $7 and $22.50. Timing the market well, there was money to be made buying and selling it, but the sheer mania has gone.

But the story around 3D printing has not changed. If anything, it is more likely now than it was four years ago to change the world. What worries me is that, since the peak in late 2013 / early 2014, five years have now passed, and we are nowhere near the highs.

If this is the template which Bitcoin is destined to follow, then that projects eventual lows around $1,000 (more likely $1,300, as that was the break-out point). It also means a longer bear market for Bitcoin than anticipated. I have to say this is a very real possibility. 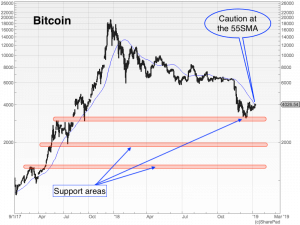 For now, the $3,000 area has held and Bitcoin is rallying a little. But I urge caution here at the 55-day simple moving average (the blue sloping line in the chart above). As you can counter trend sell-offs in the bull market, and rallies in the bear, have made a habit of petering out shortly after.

It's now easy to send and receive Lightning payments with BlueWallet