A collection of 10,000 Secret Agent koalas has become the latest NFT collection to sweep both the NFT metaverse and Twitter.

The Koala Intelligence Agency (K.I.A) are the self-proclaimed “Protectors of Mother Earth” according to the Agency Directors, the group of four co-founders and staff of the project.

The website describes the collection of Koalas as “fully trained and prepared to deploy”, “masters of disguise” and able to traverse “through the general public without a shred of evidence left behind”, a homage to the infamous spy genre in cute animal form.

Interest in the project started early, as with all NFT projects, and lead to the 10,000 koalas being minted on August 23rd in record time. Following the reveal of the minted Koalas on August 24th, owners started to share their koalas across Twitter in spades, proudly showing off their newly acquired NFTs.

From there, K.I.A gradually started to become a growing presence across Twitter and their Discord channel, becoming one of the more prominent communities that exist on “NFT Twitter”.

The Koalas and their community spread swiftly throughout the wider NFT space, obtaining over 4,000 owners since their launch and attracting the much-coveted attention of leading NFT personalities such as Gary Vaynerchuk and Faze Banks.

One of the biggest attractions of the koalas is the imaginative artwork, which brings instant appeal to the collection in the form of various clothes, colourways, skins and accessories. Based on the growing trend of adorning your favourite NFT as a profile picture on Twitter and Discord, the bright, colourful koalas certainly fit the bill. 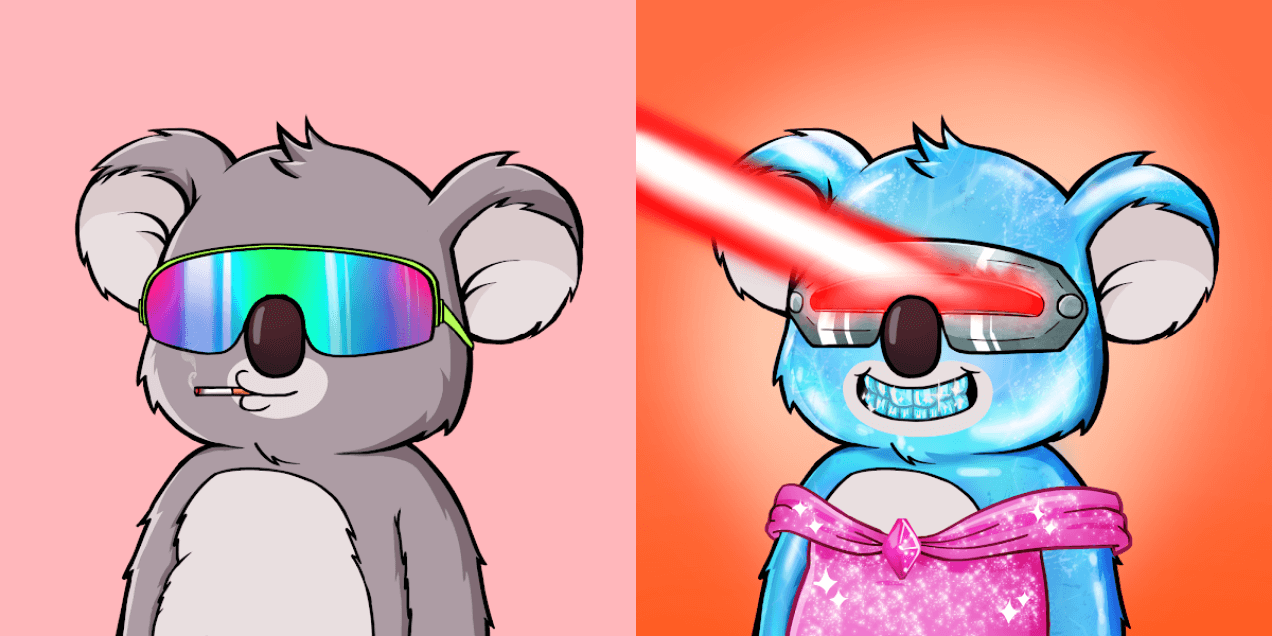 The inspiration for the project comes from founder J3‘s spirit animal (The Koala, of course) and was built to combine a good story, great art with relatable traits and a strong sense of community according to K.I.A co-founder Lakoz.

When asked about why the project has proven to be popular within the NFT metaverse, Lakoz answered passionately by stating: “We had high hopes for the project’s success but we did not expect this kind of popularity.”

He expanded on the magnetic appeal of the Koala-based collection, saying “I think people really connected with the Koalas” and that the support from the entire Koala community has been “incredible.”

“Today is only day four since launch and every day we continue to be amazed by how rapidly the project is growing and its popularity in the space,” he concluded.

Currently, the collection is trending at number one on NFT-stats.com, with data showing that over 8600 Koala trades have been made on OpenSea. Additionally, data from OpenSea shows that the K.I.A collection has facilitated more than 6.6k ETH ($20m) in volume over the past seven days. The price floor of the K.I.A collection – the lowest price you can purchase an NFT for – now sits at 1.2 ETH.

The biggest sale so far is for Koala Agent #4587, which sold for 25 ETH ($80k). The Agent, which wears a Space Suit Helmet, is amongst one of the rarest Koalas available from the collection and outlines the growing demand and desire from NFT enthusiasts to own the rarest, most scarce pieces available.

As highlighted by NFT projects like CryptoPunks and EtherRocks, both rarity and scarcity play an enormous role in the pricing of NFT collections. In almost all NFT projects, the rarest traits or properties – characteristics of an NFT such as accessories, colour or unique features – always carry the biggest price tags.

In the K.I.A collection, the rarest traits include the Hazmat Suit, Lazer Eyes, the Space Suit Helmet and the Alien Koala. These properties are ranked using percentages to help owners determine the rarity of their koalas.

Naturally, the koalas that have these rare properties are the most expensive available on the market. However, their high price doesn’t dissuade potential buyers from purchasing koalas with the rarest and most sought-after properties.

In true NFT fashion, Gary Vaynerchuk, a well know NFT enthusiast within the space, purchased one of the rarest Agents available yesterday for 23 ETH, or an estimated $74k. When asked his reasons for purchasing a Koala on the Discord channel, Vaynerchuk answered that he was interested in the founders and community of the project alongside the “utility of game.”

Secret Agent #3: 'Femme Fatale' has been recruited by Veefriends.

His Koala is one of five super-rare “Secret Agents”, a special collection of the rarest and most valuable Koalas available.

The NFT – dubbed “Femme Fatale” – is highly sought after within the Koala community due to the unique nature and 1/10,000 rarity of the asset.

Another well-known owner of the koalas is Faze Banks, a co-founder of the global e-sports organization FaZe Clan. His OpenSea wallet shows that he owns four koalas, nine CryptoPunks and many other prominent NFT projects including BAYC and 0N1 Force. He posted in the official Discord channel of K.I.A to share his collection, much to the delight of the thriving Koala community.

Banks’ message in the K.I.A Discord

Additionally, BenjyFishy, a popular player for the NRG e-sports Fortnite team, tweeted that he is now part of the ever-expanding Koala community.

The importance of community

The project has ambitious plans of being more than just an NFT project, with an extensive roadmap and an array of developments in the pipeline for the burgeoning Koala community.

Their website outlines a set of perks exclusive to the “Private Koala Network”, creating a further incentive to become an owner of a Koala and introducing something “unique and fun” for Koala community members.

The perks include Geocache  scavenger hunt where stealthily located crates are planted in the real world. Koala owners can use a locator to receive a hidden prize, which includes ETH, NFTs and much more.

Some will be as basic as finding a hidden QR code to claim a price, to other more complex ones that may require various tasks and collaboration between members of the community.

The second perk is Experimental Projects, which include “Top Secret experimental opportunities” and future missions for Koalas.

The expansive community also includes the Koala Academy, which is dedicated to the continuance of crypto education within and throughout the K.I.A’s ongoing missions.

The academy will provide educational resources free of charge with a focus on the expansion of the crypto and NFT space.

K.I.A also has charitable ambitions too in the form of a proposed 12 ETH donation to the Australian Koala Foundation later down the line. They also started an open auction for one of the rarest Koalas available – Koala Agent #7: ‘Upper Echelon’ – starting at 30 ETH (93k), with 50% of auction proceeds being donated to the Currumbin Wildlife Hospital.

The incentive of developing and nurturing a community for holders places high on the agenda for K.I.A, with the extremely active, welcoming and responsive Discord channel the place to be for Koala holders.

The Discord channel contains close to 11k users in the 72 hours following the launch, an impressive feat for any community. The channel serves as the central hub for the Koala community alongside acting as the welcoming party for potential buyers and new owners. First impressions mean everything for a potential buyer, so an active, thriving Discord is essential for attracting owners and expanding the Koala community.

Being a member of the community remains imperative for Koala holders due to the inclusive nature of NFT ownership, which grants access to the “exclusive community” and brings the social status, or “flex”, of being one of the 4,000 owners of a koala.

This Koala community is unlike anything I've ever been a part of.#TheKoalasAreComing #KODL@KoalaAgencyNFT

Within the Koala community also exists “sub-communities”, where owners of koalas with particular properties can get together and be part of an even more exclusive members club.

Afterwards, I poked around the Discord and found a vast array of channels that could immediately answer almost any question you may have about the Koalas. The most prominent was the “general-chat” channel, which acts as the heartbeat of the community. Full of positivity and Koala owners welcoming new members to the Agency, the urge to become part of the community seemed almost intoxicating.

The comedically named “show-your-wallas” channel is the self-designated “flex” channel, where owners proudly display the rarest Koalas and even sometimes name their Koalas. The “Memes” channel also remains a hotbed of creative talent combined with the rampant imaginations of the community.

When asked about the importance of the Twitter and Discord community within K.I.A, Lakoz expanded on how the Discord can be used by everyone, even those who don’t own Koalas, to hang out with the community.

“We want to make the Discord a hub for everyone to come and hang out and have different things to do.”

“We have our main Koala designated channels but also have channels for games, music, educational information for people entering the NFT space, and adding a few new channels that we think the community will enjoy them,” he said.

Lakoz noted the importance of Twitter to the Koala community, saying that Twitter “is the space where we get to show everyone else our incredible Koalas”.

Lakoz also expanded on the collaborative nature of Twitter and the Discord channel, saying “I look at the Discord as being who we are as a community internally and Twitter allows us to show our community to the rest of the world”.

Based on the current fervour surrounding NFTs, it’s clear that the spate of projects being introduced on a daily basis isn’t going to fade away anytime soon.

It remains uncertain which ones will succeed, as it is with all cryptocurrency projects. Some rise and some fall. However, when it comes to NFTs the ones with the best communities look to be the winners in the long run.

London burning! 100,000 ETH up in smoke after Ethereum upgrade