Coin Rivet recently sat down to speak with Pixowl co-founder and COO Sébastien Borget to discuss the company’s blockchain-based game ‘The Sandbox,’ the importance of non-fungible tokens (NFTs), and Pixowl’s future plans.

Pixowl was co-founded back in 2011 by Sébastien Borget and Arthur Madrid, marking the third company the pair have co-founded across a 12-year period. Initially, Pixowl focused on creating free-to-play mobile games in the ‘Builder’ games category. Builder games revolve around the player building their own house, city, world, and so on.

Pixowl has had numerous successful titles released under its name, including ‘Snoopy’s Town Tale’, ‘Goosebumps HorrorTown’, and ‘Wonder Park Magic Rides’. The company is currently working to create a simulation game based on the Addams Family.

In 2012, Pixowl launched its own franchise known as ‘The Sandbox’. The Sandbox has heavy emphasis on building, allowing the player to craft all sorts of items and share them in an online gallery.

“Overall, they (the players) have made more than 70 million creations, and the game itself has gathered a total of 40 million downloads and has a million monthly active players – it’s a successful franchise that’s been running for close to seven years now,” says Sébastien.

As you would expect from a franchise that has been running successfully for seven years, it has changed over the course of its lifetime. In particular, The Sandbox now boasts blockchain integration and decentralisation.

“We’ve been releasing the different components from the platform progressively. So, The Sandbox is essentially a decentralised game platform,” notes Sébastien.

Using the ‘VoxEdit’ feature, players are able to create, edit, and animate their creations, and can even begin turning them into non-fungible tokens (NFTs) ready to sell on the web-based marketplace – which is set to be released in Q3 2019. 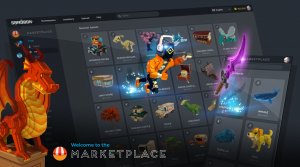 ‘I’m really excited about the potential of NFTs’

Sébastien is a massive advocate for NFTs and is excited to see the true potential of the asset class unleashed. He notes:

“I’m really excited about the potential of NFTs for multiple reasons, one of them being the interoperability – the fact that they exist on a public blockchain and can be reused by any developer, game, or platform to create a second-layer experience that will have the content of the original programmer but exploited differently.”

Having worked in the gaming industry for some time, Sébastien is well aware that the “video game industry and most of the free-to-play industry is being driven by a closed economy, where players never truly own the content they’re buying”.

Sébastien sees the prospect of complete digital ownership and digital scarcity as two reasons why NFTs can become such a key aspect of the blockchain gaming space.

“All that content – it is not transferable and it isn’t really theirs, and it is all artificially defined by game designers so that the community and the users cannot really take control of the ownership and create more profound values,” he adds.

This is particularly prominent when you consider the fact that centralised game developers have the right to shut down accounts or seize items from players.

For Sébastien, it is “very unethical and unfair that all the content, all the progress, it’s not yours even if you pay for it specifically”.

This is where blockchain technology comes into play, as suddenly in-game items can be distributed outside of the game and owned by the player.

“We’re also seeing models come to life such as play-to-earn or renting NFTs to other players for a certain amount of time,” proceeds Sébastien.

“So, in my mind, it’s really groundbreaking all the potential that a non-fungible token is opening up for game developers and players.”

Mass adoption and bringing new people to the space

When questioned on why he thinks NFTs are able to sell for so much money, Sébastien replied with insight gathered from more than 10 years of experience in video and mobile gaming: “I think there’s less and less friction in the user’s eye when putting a lot of money and value into something that is digital and not a physical item.”

This dynamic becomes pertinent when the player is able to own an item indefinitely. It attracts collectors and even ‘whales’ who look to splash big money on something that could potentially rise significantly in value.

“This is just one side of the big picture, and us as game developers, we also need to be focusing on how we bring mass adoption and bring new people into this space. This is where focusing on entertainment and gaming makes more sense,” he reveals.

Sébastien believes the solution is “creating a compelling product, a user-facing product that could really make them want to try this new technology”.

“We also need to make content that’s available for free or very accessible in terms of pricing,” he adds.

Last year, Pixowl was acquired by Animoca Brands – though Sébastien revealed Animoca Brands “likes to keep every studio very autonomous on their own projects. They’re not going to tell you the legal of every single task you should do.”

Since Pixowl has autonomy over its projects, Sébastien revealed it has plans to “have one major release every month for The Sandbox”.

One of the aims Pixowl currently has at the forefront of its mind is to continue “working hard on bringing non-crypto people into the space and help them appreciate the benefits of blockchain technology”.

The company is also “really keen to keep the community updated about our progress”, and as such it uploads a weekly newsletter to its Medium page as well as releasing monthly updates.

Sébastien concluded our interview by teasing: “We’ll have a few exciting announcements coming as well. Though, I can’t fully disclose everything just yet!”