Passing through the Polkadot Council with a green light, the proposal would upgrade Polkadot network Runtime to v9122 and is now undertaking a final stage of approval by way of public referendum among DOT holders.

As it stands, the motion seems likely to pass, opening the door for DOT developers to register on the parachain and seek crowdloan funding at auction for their projects from November 4. 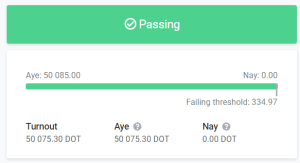 The motion to enable parachain registration and crowdloans has passed Polkadot's council and gone to a public referendum. If passed, parachain teams will be able to register their parachain and open their crowdloan on Nov. 4, 2021 at approx. 19:15 CET. https://t.co/5ouDWBmnvc

Parachain auctions are held to decide which project will be next to connect to the Polkadot or Kasuma (KSM) blockchains. For a parachain project this is an expensive undertaking in competition with other high quality projects. But as parachains operate as independent substrate blockchains it is vital to connect for a project’s success.

To participate, a parachain must successfully bid the largest amount of DOT or KSM in an un-permissioned candle auction (inspired by 16th century ship traders) – with the auction ending at a random point in time (when the candle goes out) and the highest bidder at that moment winning.

By enabling registration to the parachain, the doors will be opened for parachain projects to launch crowdloans in order to bootstrap their parachain auctions.

The move means connection to the Polkadot blockchain for parachain projects should be more accessible than ever before.

The markets have responded with excitement as the news drove a 15.74% rally for DOT from $41.44 to $47.97 ahead of the highly anticipated upgrade. 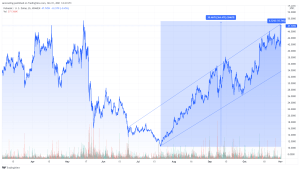 Polkadot has been undertaking a strong recovering from the summer bear market, with the price bottoming out at $10.50 on July 20 before a whopping 364% bull trend took hold – propelling DOT back to its spring heights.

This bull trend has produced solid support and resistance – indicating healthy bullish price action, with the vote set to pass – and parachain crowdloans coming to Polkadot it would seem conditions are ripe for a trendline breakout.

Needless to say November 4 could be the big date to watch.

Choise.com Launches An Offer of 15% APY Paid Out