Keeping your crypto secure: A review of the Ledger Nano X

If you're concerned about keeping your crypto secure and thinking about buying a hardware wallet, check out this review of the new Ledger Nano X

Without doubt, one of the stumbling blocks to mass adoption of cryptocurrency is keeping it secure. With over $1 billion worth of crypto assets stolen last year and the disturbing fact that even Binance can be hacked, keeping your crypto safe is essential.

One of the best-known manufacturers of hardware wallets and enterprise security solutions is the French-based Ledger. I had the privilege of being shipped its latest Ledger Nano X hardware wallet for review. So if you’re thinking of getting one (it finally became available for general sale on May 28), take a look.

The Ledger Nano X is sleeker and sexier than previous models

Like a child on Christmas morning, I waited anxiously for my Ledger Nano X to arrive, and on first glance, it didn’t disappoint. This is one sophisticated looking device. Hats off to the Ledger team – they’ve certainly put a lot of work in as far as packaging goes. 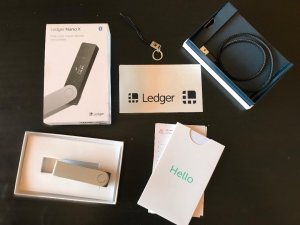 The Ledger Nano X looks incredibly sleek, with its (sparse) instruction sheet and recovery sheets, key chain, toughly braided USB cable, and Ledger stickers that let you say, “I’m a nerd, spread the word”. Or rather, “I have a Ledger wallet, come find it”. Whilst I probably won’t be slapping them on my laptop, it’s still a nice touch and worth a mention. So far so good.

So what are the main advantages of a Ledger Nano X over the previous Nano S version? Well, there’s quite a few actually. As far as I’m concerned, not the least important of all is greater storage. One of the many complaints with the smaller-but-clunkier Nano S is the fact that you can hardly store any apps on it.

The Nano X provides enough storage for up to 100 apps. It’s compatible with over 1,100 cryptocurrencies and is adding more all the time. Oh, and the battery lasts much longer than its predecessor.

The difference in design isn’t huge, to be honest. It’s rather like the switch from a regular iPhone to an iPhone Plus – not earth-shatteringly different. But it’s bigger, the interface is easier to read, and the two circular buttons on either side are easier to touch than the obnoxious Nano S’s small top buttons. 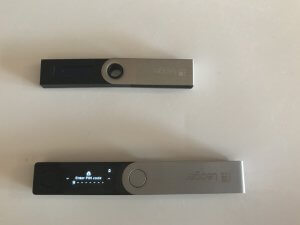 Of course, the greatest difference between the two is that the Ledger Nano X is Bluetooth enabled. That means that you can download the Ledger Live app onto your Android or iOS and transact securely without having to connect to a computer or even use a USB cable.

That might sound less safe, but the Nano X is even more secure than the Nano S. As Ledger reassures:

“The Bluetooth feature does not expose the Ledger Nano X to any security vulnerabilities since private keys never leave the secure chip and Bluetooth connection is end-to-end encrypted to protect your privacy.”

Is setting up the Nano X any easier than the Nano S?

In a word, no. The process is almost identical, except for the fact that I set up this device on my iOS. When you can transact without using a desktop, after all, most people probably won’t bother connecting to one.

To be clear, Ledger users and cryptocurrency geeks won’t have a problem setting up the Ledger Nano X. I was armed with all the knowledge of my experience with the Nano S. But, if you’re new to this, get a coffee and take a deep breath before you start.

You have to navigate the interface with the left or right button and tap both buttons at the same time to set your pin code, confirm your pin code, select your 24 recovery words one by one, then monotonously reconfirm them one by one again on your device.

It’s enough to make the eyes roll, but if you’re holding onto insecure crypto assets of some value, it’s worth the extra steps. Even Ledger’s Executive Director Eric Larchevêque would agree that backup and recovery are still “in the stone age” when it comes to crypto (he told me so himself in a previous meeting).

Syncing the device with the Ledger Live app on my phone was a breeze. It only took four attempts. On the first three tries, it inexplicably got stuck with a message reminding me to ensure my wallet was within range (it was right next to the phone). 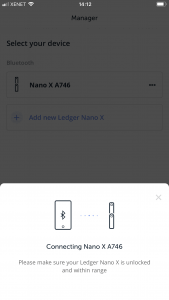 I was about to give up and go over to the desktop version when all of a sudden, it worked. Fourth time lucky, I guess. Not sure if that has happened to any other users; I checked my WIFI connection and all seemed fine.

Once I had gotten over that hurdle, downloading app after app was easy. I was able to send and receive transactions quickly (with way fewer expletives than usual). I’m the first to admit I sometimes lack the patience needed for carrying out entirely cumbersome cryptocurrency transactions, but that’s not Ledger’s fault.

For those already in the space, the Nano X is a no-brainer. If you’re used to the Ledger Live app and setup process, the configuration will be a walk in the park (assuming your phone syncs right away).

But it still leaves me with a niggling doubt. Setting up a hardware wallet may not be rocket science, and Ledger’s doing its best to improve the user experience. But while we have to manually select, confirm, write down 24 words, and ensure we keep our backup phrases and devices safe, I just can’t see the masses getting onboard. It feels like there’s still a long way to go before we reach that point.

All images author’s own.

Three symptoms of a Bitcoin crash