The emergence and adoption of decentralised finance in cryptocurrency has been breathtakingly swift.

DeFi protocols now secure more than $200bn worth of assets and continue to disrupt traditional banking options through decentralised ownership of assets, higher yields and a keen focus on rewarding users.

The king of the DeFi space – Ethereum – continues to reign supreme due to its superior infrastructure and long-standing reputation in the industry. It currently secures $140bn worth of assets – equivalent to 70% of the market share – and shows no signs of abating.

However, Ethereum has been plagued and criticised for its rising gas fees, slow block speeds and often diluted yields – leading many to seek faster alternatives through competing Layer-1 blockchains such as Avalanche, Fantom and Solana.

Despite fierce competition, Solana has proven itself to be the winner in the Layer-1 space, with DeFi protocols on Solana now securing more than $10b of assets in total value locked (TVL).

As DeFi enthusiasts look to more affordable, faster platforms, many are discovering disruptive DeFi protocols such as Orca – a Decentralised Exchange (DEX) putting people first and incorporating a “human-centred” design.

Orca has emerged as one of the top DEXes by trading volume on Solana and now secures the fourth-highest TVL across the Solana ecosystem. It has seen an 1,400% increase in TVL from the beginning of August and now secures more than $850m in assets today.

The platform is also recording incredibly high trading volume figures – a sign that savvy DeFi users are utilising its extensive range of features designed to drive volume and users to the platform.

Everyone loves TVL. But when we're talking AMMs, trade volume is a stat worth watching.@orca_so broke 9 digits yesterday… probably nothing 😉 pic.twitter.com/BpAKYmlZ7U

To find out more about the Solana ecosystem, CoinRivet spoke with Orca co-founder Grace Kwan – aka ‘oritheorca’ – to delve deeper into the inspiration behind its people-first approach to finance and how Solana is changing the DeFi landscape for the better.

When asked about the “human-centred design”, Kwan described how the design was focused on users first and then building based on their feedback.

“The human-centered design describes the process I used to design the DEX,” she said.

“It begins by interviewing users and observing how they used existing products to identify pain points and areas for improvement, which led to innovations such as the Fair Price Indicator and Magic Bar.”

The Magic Bar has proven itself to be the most intuitive feature on Orca. Users can simply type in a keyword such as ‘SOL’ followed by another asset and a drop-down menu will appear – listing all of the available options and enabling an easier one-click method to choose your trading pair.

The Magic Bar feature on Orca

Following market research with DeFi users from previous Ethereum-based projects, they found that brands represented by animals “were beloved by the community” and that a whale signified “power and playfulness”.

In fitting with the community-focused, human-first design thematic, Orca chose a whale for its design approach as the brand is “professional, principled, and playful”, according to Kwan.

As it turns out, both the co-founders of Orca are avid scuba divers with a great love of the ocean, so the orca turned out to be the “perfect choice” for the DEX – the logo was even hand-drawn by Kwan herself. 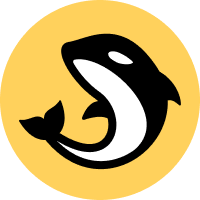 To complement its human-first approach and love of the ocean, Orca’s charitable ambitions are also a driving factor in its mission.

Orca’s charity efforts come in the form of the “Impact Fund” – a pledge to donate 0.01% of all trading fees to ocean conservation projects.

Every quarter, the fees in the fund will be donated to a cause tackling climate change through ocean conservation efforts.

Kwan said that the first donation will be made “at the end of 2021” and donated to Ocean Conservancy – a project dedicated to marine protection initiatives.

When asked what advantages Solana-based DeFi provides over competitors such as Avalanche, Ethereum and Cardano, Kwan answered with conviction.

“It solves the Scalability Trilemma: fast, secure, and decentralised,” she said.

“Solana Labs has an extremely strong team across engineering, marketing, and operations, and has been executing extremely quickly.”

Kwan also commented on the remarkable adoption that Solana has seen in the industry and how it is “on top of” emerging trends such as NFTs via platforms like Metaplex.

Despite the glitz and glamour surrounding Solana, the ecosystem is still relatively new – meaning the Orca team faced many challenging hurdles along the way.

Kwan said the Orca project started building in September 2020 and launched in February 2021 at a time “when there was very little infrastructure on Solana”.

“This has been a challenge, but also an advantage for our team thanks to our background writing smart contracts/DeFi apps on Ethereum.”

Now, Orca employs eight DeFi enthusiasts who were all eager to “dive full-time into a passion”. In this case, DeFi and go full-time in crypto.

Kwan added that enabling people to pursue their dreams in crypto has ” been one of the most rewarding parts of the journey so far”.

1/ As of today, @orca_so has enabled 8 people to quit their jobs and dive full-time into a passion (DeFi)!

The project was launched with a user-first focus, with the community given “first access” to the ORCA token. it meant Orca lacked the support of VCs and that a lot of the early work was done between Kwan and fellow co-founder Yutaro Mori.

In a recent boost to Orca’s development timeline, the project benefitted from an $18 million Series A funding round – led by Three Arrows Capital and involved selling ORCA tokens from its treasury to investors.

Kwan says the funding will be used to “build partnerships with well-respected funds who will build faith in, provide liquidity to, and help market Orca”.

The financial injection will also be used to expand the Orca team – a team that Kwan believes “truly stands out in DeFi” and boasts experience in DeFi alongside backgrounds at leading legacy brands like Google and Amazon.

Orca has now firmly established itself as a leading DeFi protocol on Solana and continues its upward momentum as the ecosystem begins to prove itself as a worthy competitor to Ethereum.