EXCLUSIVE: In an explosive interview, Roger Ver tells Coin Rivet of his anger towards alleged scam BitClub Network as he denies any involvement

Crypto entrepreneur Roger Ver has distanced himself from the unfolding fraud allegations surrounding the BitClub Network.

Four members of the suspected Ponzi scheme were this week arrested by US authorities as prosecutors investigate what they allege is a $722m global scam.

However, Bitcoin Cash evangelist Ver has been unwittingly caught up in the furore surrounding the arrests after pictures emerged of him having dinner with senior BitClub figures, with suggestions that he had advised the New York-based scheme.

But in an exclusive interview with Coin Rivet, the 40-year-old vehemently denies any involvement with the alleged scam and speaks of his anger at how BitClub attempted to use his image to promote a product he had nothing to do with.

“I’ve never been involved with BitClub’s business in any way,” he said.

“I’ve had dinner with them on three occasions that I can recall – twice in Tokyo, and the third I think was in Korea.

“Two of those dinners were part of a big group of people.”

Referring to images of him with BitClub’s Russ Medlin and Bitmain’s ‘Yoshie’, which are currently being circulated with veiled accusations of heavy involvement in the scheme, he says he was merely keen to promote Bitcoin Cash “to anyone who would listen”. 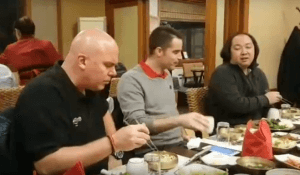 “Yoshie ran their mining pool and is a Bitcoin maximalist who hates Bitcoin Cash,” he explained.

“Russ actually was trying to use BTC for payments for BitClub but was having understandable network congestion issues, so like everyone else I can get to listen to me, I was urging BitClub to switch everything over to BCH.

“I obviously didn’t have much success with that.”

Asked why he was even having dinner with Russ Medlin, Ver says he was innocently offering a helping hand to a start-up – an act of goodwill before quickly becoming suspicious of the project.

He said: “I think I likely reached out to them first during the scaling war urging them to support bigger blocks with their hash rate, and then later BCH after the split had already happened.”

Soon after that meeting, the libertarian grew wary of the way BitClub was being operated, and furiously slammed them for using his image in promotional material.

“Some other BitClub fan named Ryan set up a whole fake website with my photos and fake quotes saying ‘I’m a proud BitClub member and I earn extra residual income doing Bitcoin mining with Bitclub’, or some quote like that,” he said.

“I was really angry because they were using my name and image to promote their product that I had nothing to do with.”

In an effort to separate himself from the scheme, he tweeted about BitClub earlier in the year, stating: “I’m not involved with #bitclub in any way. I think it’s likely an MLM pyramid scheme that’s going to end badly for almost everyone involved.”

“When I looked into it more, I noticed they didn’t even tell their customers how much hash rate they were buying,” he recalled.

“That fake website was what inspired me to send the tweet letting the world know I have nothing to do with BitClub.”

One bone of contention that Ver’s critics are currently latching on to is the fact he later deleted the tweet. Several have pointed fingers of suspicion over an awkward video showing the tweet’s removal in the presence of Russ Medlin as an implication of actually endorsing what is now facing allegations of being a multi-million dollar worldwide fraud.

“I wonder how many of the people criticising me tweeted anything negative about BitClub as early as I did? I bet none,” questioned Ver.

“A significant time after I had made that tweet, the BitClub guys contacted me saying they wanted to talk about big blocks or BCH – I don’t recall if it was before or after the split.

“They really wanted me to delete the tweet and argued that it was hurting their business.

“In the course of our meeting, I agreed to delete the tweet for them, and it was implied that they would do more to support Big Block Bitcoin.

“Deleting a tweet shouldn’t be seen as an endorsement in any way, and I’ve never done any business with BitClub in any way.”

Meanwhile, FBI agents are hunting a fifth person – whose name they have withheld – following the arrest of four BitClub Network chiefs.

A fourth – Silviu Catalin Balaci – was arrested in Germany two days ago. It is believed the whereabouts of the fifth suspect are unknown.

The Justice Department has branded the ‘BitClub Network’ as a “high-tech Ponzi scheme” that lured victims with fake Bitcoin mining profits while taking money from investors who were rewarded for recruiting new members.

Apparently preying on people across the globe, the scheme is understood to have operated from April 2014 until recent days from offices in New Jersey, according to an indictment signed by US Attorney Craig Carpenito.

FBI officers spearheading the investigation claim the gang were using an array of complex methods to hoodwink victims into believing they were part of a get-rich-quick club.

Anyone who believes they may be a victim of the alleged BitClub fraud is asked to visit www.justice.gov/usao-nj/bitclub or the Department of Justice’s large case website www.justice.gov/largecases.

There, victims can find more information about the case, including a questionnaire for victims to fill out and submit.


OneCoin victim makes plea to Ruja Ignatova: “Hand yourself in!”

Why the UK general election result is bad for Bitcoin