Popular meme token Shiba Inu (SHIB) has seen a 36% price rally following its listing on cryptocurrency exchange Kraken and reported rumours regarding the release of a potential ‘metaverse’ game.

Trading for the dog-based token is due to go live today, with traders able to purchase SHIB using either the Kraken platform or Kraken Terminal – the exchange’s trading feature.

The token has recently been in a slump following a long period of profit-taking and rotation into other assets. It has also suffered in both market cap and its rankings amongst the leading crypto assets, being recently flipped by exchange token CRO in market cap after rollercoaster price action from the two.

However, despite recent heavy volatility in the price of SHIB – which is often sparked by rumours and market catalysts such as mainstream adoption – the token has managed to claw its way back into the crypto elite at rank 11 by market capitalisation following the announcement of trading on Kraken. 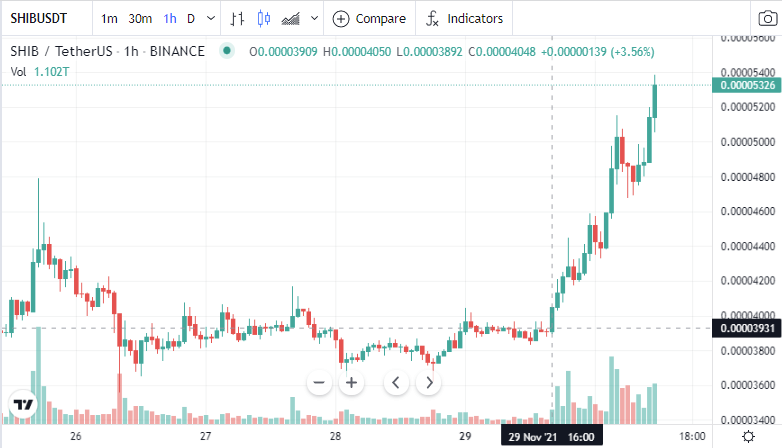 The price of SHIB has rallied 36% since the announcement at 16:30 GMT yesterday.

SHIB benefitted from rumours surrounding the creation of a ‘metaverse game’ based around the token, developed by AAA game designer William Volk.

It has also become the latest crypto payment option to be added to Newegg – a leading online retailer.

The token remains a favourite with retail investors due to its low price, accessibility across multiple exchanges and its ‘friendly’ design approach.

However, some in the industry remain less positive regarding the listing of ‘meme tokens’ on leading exchanges.

Speaking to Coin Rivet, CoinCorner CEO Danny Scott said that many exchanges were “adding these tokens rather than actually innovating and doing something” and that they offer “no meaning and no use case” to investors – with many being heavily influenced by Elon Musks’ support of meme tokens.

Polygen to Conduct its IDO via Polygen, Trustpad, Polystarter and Copper