Should You Use Aggregator 1inch or a DEX?

1inch claims to be the most liquid, lowest slippage, best exchange rate aggregator.

Just over a year since the latest funding, 1inch raised a Series B round of funding in December 2021, led by Amber Group, for a total of $175 million.

1inch looks a bit like Yearn as a DEX aggregator. While Yearn aggregates major lending protocols to help users get competitive rates, 1inch aggregates DEX protocols to give users the best swaps.

There is no shortage of innovation in the blockchain world, and Lego attributes keep piling up. This article will use data from Footprint Analytics to explore what makes 1inch unique.

1inch is mainly composed of a DEX aggregator and a liquidity protocol (formerly Mooniswap.) As a DEX aggregator, 1inch uses Pathfinder as a routing algorithm, aiming to find the optimal swap path for users.

Pathfinder compares different DEX platforms to choose the best exchange rate, possibly splitting the order into different platforms for swapping, or even converting the deposited token into the target token multiple times. This saves the user the work of comparing between the DEXs themselves. 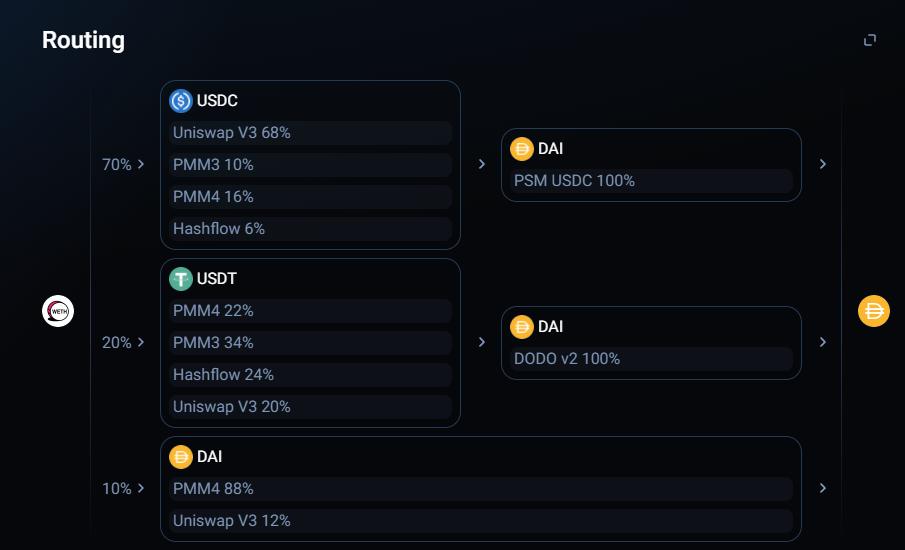 1inch claims to be the DeFi aggregator with the most liquidity, lowest slippage, and best exchange rates, and currently supports 7 chains including Ethereum, BSC, Polygon, Avalanche, Gnosis, Optimistic, and Arbitrum.

The 1inch liquidity protocol is not as outstanding, with only $22 million in TVL and less than $8 million liquidity in the largest pool. The most traded pairs are also concentrated in stablecoins, ETH and BTC.

In addition to the usual DEX features, 1inch has more advanced features.

Due to the price difference between different DEX platforms, users may save 0.13% to 20% via 1inch compared to going directly to a single mainstream DEX platform. 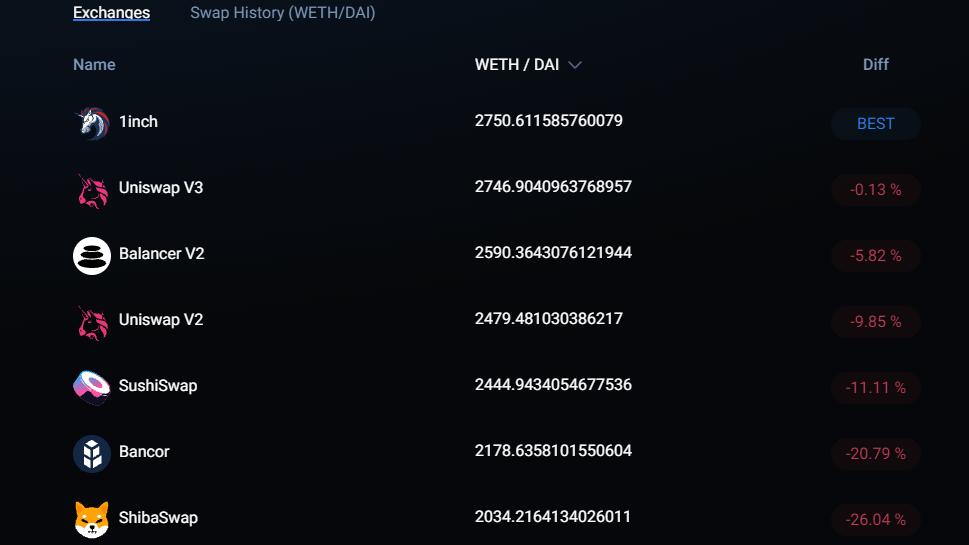 For users who need to swap large amounts, the effect will be more obvious, as swaps on a single platform are likely to have high slippage. The splitting of 1inch between different protocols in a short period of time minimizes slippage.

Users can even use token collateral such as on Aave and Compound, to do in one step what users had to do through the complex path of packaging and unpacking. This saves time and gas costs.

The crypto market is open 24/7, but users cannot wait 24 hours for the best price. 1inch’s limit orders allow users to swap at a set price for a set period of time and complete the trade when the market price matches the conditions.

Setting a specific price is like a stop-loss order. The user sets the price to an amount below the market price, and when the price drops below it, the order is executed.

Users can choose to trade OTC at 1inch. Since the price is predefined, there will be zero slippage. Users can clarify the price and receive the exact amount before trading.

1inch developed the CHI token, a gas token that helps users save on transaction fees by allowing them to mint and hoard when prices are low and use them when prices are high. It’s a bit like buying a discount coupon and burning it when you use it, saving you up to 42% on gas fees.

Users can customize the price of two currencies if they can find a suitable counterparty. Users only need to fill in the address of the other party and set the time of the transaction to solve a secure transaction between two people.

What Should Users Know About 1inch?

There are a few things to keep in mind while trading with 1inch.

Since 1inch splits transactions into multiple transactions in order to find the lowest price, it is inevitable that gas fees will increase. Users need to take gas fee into account when calculating the amount received, which may not be friendly to users with small transactions.

1inch helps users estimate gas fees, and users can also choose the lowest gas option to reduce the transaction being split too much.

Because the price will fluctuate between the time of the quote and the time that the transaction is mined, 1inch will not refund the user the amount they overpaid when the actual price is less than the price quoted. This results in the user paying more than the price when they intended to get a better price within 1inch.

1inch has already acknowledged the swap surplus and announced that it will send part of the surplus to the referral program and part to the 1inch Network DAO Treasury.

1inch issued the token $1INCH in December 2020, and users holding the token can vote on various settings of the protocol’s pool governance and factory governance under the DAO. Users who stake $1INCH will also receive swap surplus. 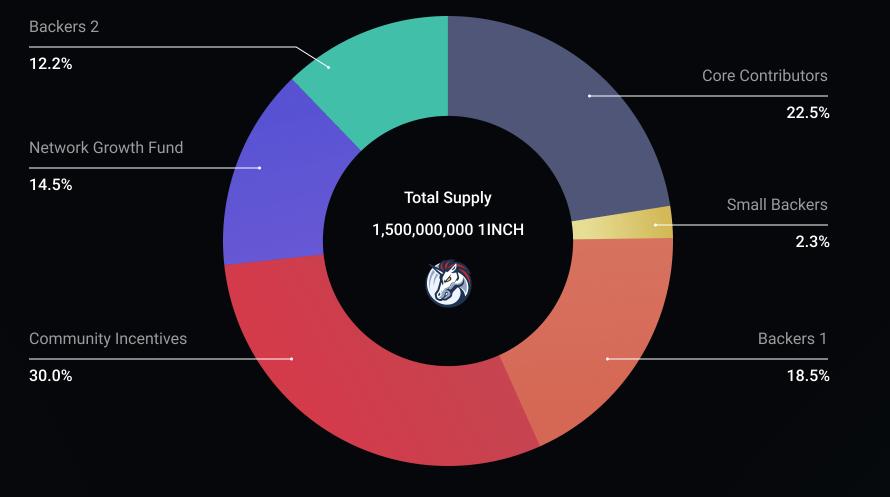 The top DEX platforms typically allocate more than 50% of their tokens to the community, such as 60% of $UNI and 65% of $BAL. In contrast, $1INCH seems to be much less decentralized.

With the percentage of core staff gradually releasing in the later stages, there is concern that a higher percentage of program owners will control the price, so users should consider buying $1INCH carefully. As shown by Footprint Analytics , $1INCH is not too high, topping out at about $7, and as of March 9 was $1.37.

Among many DEXs, 1inch offers a more efficient solution for users. 1inch tries to help users save more money, but splitting too much can sometimes be counterproductive.

As Layer 2 projects develop, the DEX aggregator may benefit by reducing the price of gas fees. When users no longer bother with high gas fees, they will prefer the split swap approach, which offers more benefits.

At the same time, while seeing 1inch’s excellent ability to obtain financing, users who trade should not forget about slippage, especially positive slippage. For those who care about decentralization, don’t forget to pay attention to the token distribution.