Cryptocurrency just took a giant leap towards mainstream acceptance by appearing in the latest episode of The Simpsons.

However, the episode also throws up a mouth-watering twist that suggests the creators of The Simpsons may know the true identity of Satoshi Nakamoto – the mysterious founder of Bitcoin.

The two-minute sketch delivers a humorous explanation of how cryptocurrency works as it cuts to a cartoon ledger who croons: “Each day I’m closer to being the cash of the future, not in your wallet – I’m in your computer!”

But the real eye-opener comes in the form of a subliminal message which appears briefly on the screen.

“Well that is a total pile of cryptocurrency. In this system, rules are defined for the creation of additional units of cryptocurrency. They can be generated by fiat like traditional currency or just thrown around randomly or all given to LeBron.”

It goes on: “But for some reason, these crypto guys are really into computers. So we have big buildings full of energy-gobbling, air-conditioned computers solving useless math problems. But now we can’t have straws?!”

Viewers would need to pause the screen in order to read the almost-concealed note, but those who do will be able to read the bombshell last line…

“Also, we know who Satoshi is, but we’re not telling.”

Obviously, anyone can claim cryptocurrency is the future of world finance or say they know the identity of Satoshi Nakamoto. But if the creators of The Simpsons do, people take notice.

After all, the long-running cartoon show has an impressive history in making weirdly accurate predictions.

In an episode broadcast in 2000, Donald Trump appears as the outgoing US President. While Lisa Simpson is being lined up as his successor, she laments: “We’ve inherited quite a budget crunch from President Trump.” Donald Trump became President of the US 16 years later. 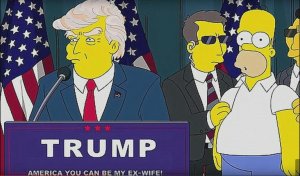 In 1993, an episode featured Las Vegas magicians Siegfried & Roy where one of the entertainers is savagely mauled by a white tiger in their act. Ten years later, Roy Horn suffered life-changing injuries after being attacked on stage by one the pair’s white tigers.

Smart watches appeared in a 1995 episode – 20 years before Apple launched them.

Also in 1995, Lisa Simpson’s trip to London showed an exceptionally tall and mysterious building that looked strikingly similar to The Shard. Fourteen years after the episode aired, construction work on The Shard began… in exactly the same place it had appeared in the Simpsons.

The impressive list goes on. Including predicting the final episode of Game of Thrones, faulty voting machines in the US elections, the Ebola virus, Lady Gaga’s Superbowl performance and many more.

The question now, it would seem, is will cryptocurrency and the identity of Satoshi Nakamoto be added to that list?

Should you take advantage of free online poker?