Strange times rake up golden memories, but are we facing crypto’s dotcom moment?

DOMINIC FRISBY: "It will fall back in love. Don’t worry. It’s a fickle relationship. It’s like Richard Burton and Elizabeth Taylor"

Oof. What a brutal fortnight.

Bear markets are horrible things, as I think you must be sick of me saying.

The danger, however, was that it was such an obvious area of support, there were likely to be a load of stops just below. If $5,800 did not hold, they would likely get triggered and we would get an avalanche of selling. I’m afraid that’s what happened.

Here is a five-year chart of Bitcoin, but it is a log chart. A linear chart would scale price – 1, 2, 3, 4, 5 – whereas a log chart scales according to percentage gain – so it goes 1,2, 4, 8, 16 and so on. Log charts tend to be more useful when you are considering the long-term, particularly for something as volatile as Bitcoin, where the percentage gains and losses are so pronounced.

On this log chart I have drawn some horizontal red lines off previous highs and lows – price points that have had influence in the past. As the bitcoin price comes down, these could prove to be areas of support. 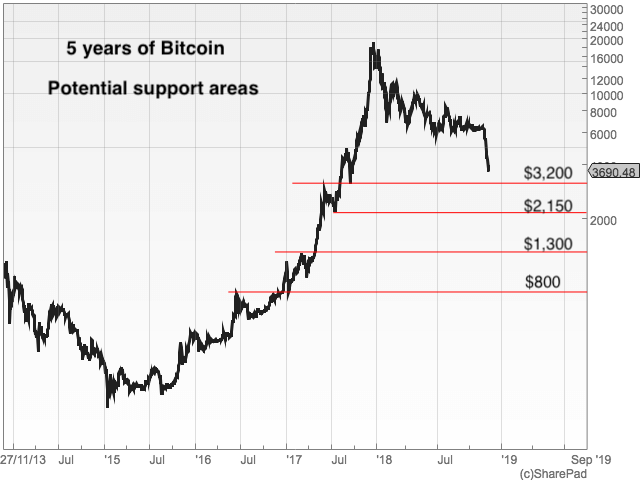 As you can see the first area of support I see is around $3,200. It marked a significant high on the way up in summer 2017 and then a significant point of support. We must hope it holds.

If it doesn’t I see another line of support at $2,150. But it is not quite as strong as I expect that $3,200 area to be. By the way, I am using round numbers. The Bitcoin price seems to vary from exchange to exchange, so I tend to keep my brush strokes quite broad.

I will be very surprised if that number gives way. This was the break-out level. This was the high in late 2013 that took another four years to re-take. It’s an obvious buy-point. Bitcoin should find tremendous support there.

It’s hard to know exactly what has caused this latest turmoil. The sell-off coincided with the fork of Bitcoin Cash – now Bitcoin Cash ABC and Bitcoin SV. If it sounds ridiculous that’s because it is. But the developers and the miners could not agree on where to take Bitcoin Cash and the result has been this fork. It’s also worth noting that the sell-off coincided with a broader sell-off in tech generally – Apple Alphabet (Google), Facebook and Netflix, for example, have all been having a rotten time of it. An investment world that was once in love with tech, now is not.

It will fall back in love. Don’t worry. It’s a fickle relationship. It’s like Richard Burton and Elizabeth Taylor.

Following the same logic, here is a five-year log chart of Ethereum with some lines of support. If you read my piece last week, you’ll remember I projected $100 for Ethereum (it was $135) and we have not got there. 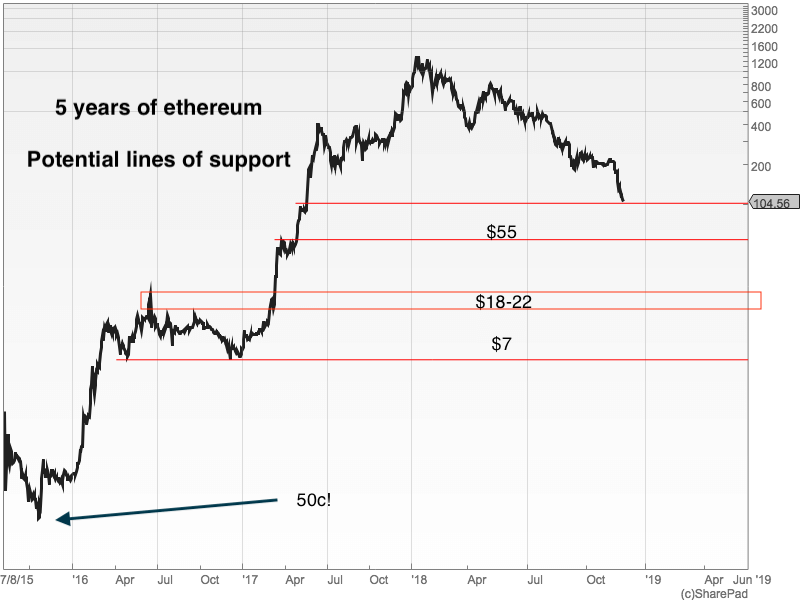 What an extraordinary bull market that was! From 50c all the way to $1,300. Gosh some people made a lot of money out of that.

After that the next line of support falls around $20 and then $7.

It seems extraordinary that I am making such low projections but you have to remember that this is a speculative new tech and the same forces that drove it from 50c to $1,300 will drive it back the other way.

The big question is just how bad is the bear market going to get. There is no way of knowing that, of course.

The question I am asking myself is – is this crypto’s dotcom moment? Is this the epic bear market that weeded out the Amazons, the Apples and the Googles from the Boo.coms. Are we in 2002? Or is there still one more epic bull market to come? Are we, perhaps, in 1996?

It’s something I have been in two minds about for some time. On current evidence this is looking more like 2002.

But Bitcoin has been here at least three times before. These bear markets are all part of it.