The news that you can now margin trade Tether on Bitfinex wasn’t the biggest news story that Coin Rivet broke last month. Over on our Facebook page, however, it did cause some interesting comments. Surprisingly, Tether seems to have a legion of strong and loyal fans, or so it seems. I wrote recently about bots manipulating polls on Twitter, and whether these comments are coming from bots is up for debate, but either way it is interesting.

The article in question wasn’t very negative about Tether at all. There was no FUD, but rather just the simple case of reporting that Tether can be margin traded now. Yet, looking at the responses, you would have thought that the article was a hit piece criticising everything about Tether. 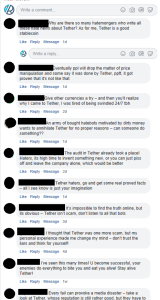 As you can see, either Tether has a fan base that is soon to rival the XRParmy, or we have a wave of Tether bots on our hands commenting on anything with ‘Tether’ in the title, no matter the content of the story. What is particularly interesting is that many of these comments criticise bots for promoting FUD against Tether, presumably in an effort to hide that they are bots themselves.

Let’s say that they aren’t bots and are instead just big fans of Tether. Who loves Tether this much, really? Sure, you can use it to send money worldwide, but this possibility isn’t that exciting. Tether isn’t particularly groundbreaking enough to warrant such fandom.

The difference between bots and fandom can sometimes be hard to differentiate. Members of some communities are so fervent in their belief that there is relatively little that can be done to change their minds. This is true from Bitcoin maximalists right down to the bag holders of some of the worst coins in circulation. For some, the purchasing of some cryptocurrencies creates a strange emotional attachment.

When the difference between bots and real people becomes hard to tell, then there is clearly an issue in the cryptocurrency space. What can be done about it? Right now, not a lot. Until the market is cleansed of the majority of coins in circulation, leaving only actual valuable ones, people will continue to bag hold with some form of delusion, unfortunately.

How to spot an ICO scam