The future is a blended solution of half-fiat and half-crypto, but it must be given time

Coin Rivet meets world-renowned boardroom figure Thomas Power as he discusses his career, the advancement of blockchain and crypto, and how the echoes of history will shape the future

In 1980, a young Thomas Power walked into his first job. It was behind the delicatessen counter at his local Waitrose.

It seems a far cry from the stylish boardrooms he currently inhabits across the globe.

But, as he’s keen to point out, every journey has a start point. And while the amiable non-exec may have begun his career amid fondant fancies, sandwiches and iced buns, his rollercoaster ride to the top of his field has certainly been no picnic.

With a deep love for computers – the ZX Spectrum and Commodore 64 were the almighty rulers of PCs at the time – Thomas soon found himself working in an advertising agency which was pioneering computer innovation, and he quickly began to shape his own business mind around the technology.

Before long he was snapped up by Alan Sugar in 1986 as the multi-millionaire was accelerating the Amstrad corporation – a move he remembers fondly. 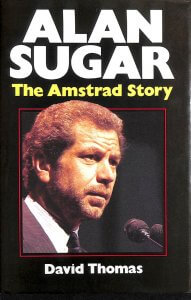 “It was a remarkable time,” he says.

“I met Bill Gates and people like that as I got into the top of the technology world – but I was 22 and a bit of a bag carrier!

“I did learn from Alan Sugar though – he was a great analyser.”

When Sir Alan Sugar published his first book – The Amstrad Story – in 1990, Thomas featured in it.

“And that instantly became my CV,” he smiles.

“I observed someone who was regarded as an empty suit by the market, but he had the recipe for success, and was ahead of the technology.

“He’s got an almost video-like memory – he could recall everything you said and say to you ‘here’s what you said two years ago on this subject’, and he would read it back to you verbatim.”

After learning the business ropes from Alan Sugar and the glittering array of industry stars that swirled around him, Thomas later embarked on a fast-moving life as a non-executive director bringing his passion for digital development to boardrooms across the world.

He’s also been a prolific author, and the first copies of his eighth book – ‘Tokenomics’ – arrived on his desk as he gave this interview with Coin Rivet. 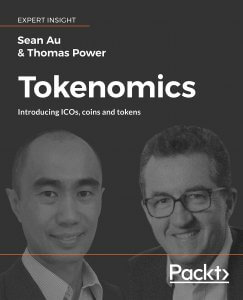 Although he admits writing and publishing is a gruelling experience, he appears to delight in sharing knowledge. Perhaps it’s this insatiable desire to impart wisdom that drives him to be such a respected voice in the blockchain and crypto community. And, while everyone in this space has their own thoughts and ideas on the future of the industry, there are more than 300,000 Twitter users hanging on his every word.

He possesses a keen yet measured approach to the science of business. But where does he see blockchain and crypto going, and what does it all mean?

“We need to give the technology time to breathe and time to be born.

As well as a scientific and analytical mind, Thomas also has a deep love of history. It’s a smart cocktail to bring to the bar when you’re in the business of delivering ideas and choices to people who want to explore what the technology has to offer.

“Mark Twain said ‘History doesn’t repeat itself, but it often rhymes’ and I’m a big believer in that philosophy – especially when you look at the possibility of fiat being overtaken by digital currency.

“I see that as a 30-year journey – a blended solution where half-fiat-half-crypto works as a digital version of national currencies overseen by the central bank of that country, but gradually as people shift towards being paid for their labour in crypto.

“People are considering half-and-half as an income, but I still think people want to have money in their hands. There will always be people who want fiat, and people who want digital, and I think it’s a great way of building a pension fund.”

“I want to believe in decentralisation, but history tells us that half a dozen people will win the game in the end.”

Interestingly, Thomas Power sees an unusual balance between the good and the bad of a digital world. For all the great things the human race has been given access to, he can see a shadow being cast from the very things others would consider to be advantageous to society.

“One of the paradoxes of the internet I find weird is that we’ve spent thirty years giving people access to information, but we are now more divided concerned, anxious or upset – and people feel the world is more unstable,” he explains.

“Yet the things we’ve given people are more information and communication.

“Take Facebook, for instance – it is like a drug, and if you feed the habit by giving the social media power to humans, it makes the world more unstable.

“If he [Mark Zuckerberg] chooses to launch ‘FaceCoin’ and reward people for their involvement and consume the drug, then he’s feeding that habit.

“People don’t pay you to drink or smoke – but they could pay you for your addiction. He then has the market.

“Tokens are buying your attention – but that can be made to be a positive thing. It can’t be allowed to become a tokenised world, and the reward has to be a positive contributor to things like climate change.”

As an advisor on several boards from London to Auckland, his busy life as a non-exec is all about using his skills to present people with choices to consider. For blockchain and crypto, he breaks the decision down into various pieces.

“I would say in terms of an industry, seven different parts define it,” he begins.

“Firstly, the technology – is it real? Blockchain is about looking at the identity of the individual – we need to be able to carry our own identity. But identity is a huge challenge and an opportunity. So, is it all real?

“Secondly – the applications that are being built. They’re vast, but which one of the thousands of them are going to come through? Not many.

“Cryptocurrencies – which ones are going to last? Logic says one per cent will make it through. Forty may remain and they’ll be consolidated down.

“The exchanges – the CoinBases and Binances. They’re powerful because they’ve got the audience. What are they going to do?

“The miners – what are they going to do? The market’s lost confidence. The only people who can support a market running at cost are those with the money. Margins are too low to survive because the market has lost confidence in the idea.

“The laws – there are lots of laws going through in the United States. Lots of KYC issues to consider here.

“Finally – the incentives. How can you educate your company and suppliers to consider tokens as a transaction? The thing about humans is, we’re reward-based. We’re in a world where attention is the product. The education journey here is a 30-year journey.”

There is of course, the issue of impending regulation to consider. Which side of the fence does the history and analytics of business sit?

“Well, I certainly don’t believe in self-regulation,” he offers.

“It has created a dark and mysterious-looking industry at a token level, and that can’t be good for the future.

“There is a huge responsibility on bodies to legitimise the industry, and the market can’t be born until it is legitimised.

“Simply put, if you can’t see the investors, it can’t work.”

Thomas is keen to recognise that while knowledge is key, the opportunities that blockchain and cryptocurrency present to industry leaders are complicated things to understand. It’s here where the doors need to be opened in order for widespread adoption to take hold.

“I’ve got a speech to make to a board next week where I have to explain this industry – you know, is it a real thing, and should we consider it?” he says.

“I would say if they choose to do nothing, they’re at risk. Many people like to choose nothing – but that often means the knowledge is not getting into their heads.

“You have to learn this. You have to study this and become world class at this subject in order to be competitive.

“Just look at me, for instance – even after 38 years in the technology business, I still have to compete.”