The resilience of Bitcoin

PEDRO FEBRERO: "Compared with the beginning of 2017, Bitcoin’s price is still worth 10 times more now than it was then, which means Bitcoin remains a great store of value"

On Tuesday, a fresh wave of selling engulfed Bitcoin and altcoins, dragging the market toward fresh yearly lows and thrusting Tether (USDT) into the top 5 coins by market cap. The crypto bear market is showing little sign of letting up. Against this backdrop, it’s easy to forget that cryptocurrencies like Bitcoin have become so resilient to death that no amount of fear, uncertainty, and doubt can override the phenomenon currently underway.

Compared with the beginning of 2017, Bitcoin’s price is still worth 10 times more now than it was then, which means Bitcoin remains a great store of value.

The market capitalisation of all cryptocurrencies reached a low of $107 billion on Tuesday, as the bearish momentum continued to push prices lower. Last week, the market bottomed around $105 billion, marking a new 15-month low. The way prices are going today, new lows are likely in the short run, so don’t expect any bounces soon. 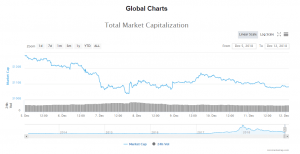 Losses among the major cryptocurrencies ranged from 2% to 8%, with Bitcoin reaching the lower end of $3,300. The leading digital currency is quickly approaching a critical test of the $2,800-$3,200 support following a series of lower lows and lower highs.

The widespread sell-off has allowed Tether to reclaim its stablecoin status. USDT was last valued at $1.01, where it was trading slightly higher than its dollar-peg would suggest. Tether is now a $1.9 billion market, ahead of Bitcoin Cash, EOS, and Litecoin.

For the past decade, Bitcoin has run on almost zero financial loss on the chain itself, making it the most reliable financial network in the world. Bitcoin is so decentralised, in fact, that the US Securities and Exchange Commission (SEC) has officially declared that it cannot be considered a security.

As investors will soon find out, autonomous networks that are sufficiently decentralised and with no central authority are difficult to kill.

To keep up with Bitcoin’s development, check out the number of Bitcoin contributors giving up their time to improve Bitcoin. I’m sure it will help you understand how truly decentralised cryptocurrency can be when compared to traditional fiat alternatives.

Bitcoin’s dominance will wane over the next decade, says top expert