What are the top altcoins, and how are they performing versus Bitcoin? We take a look at ETH, XRP, BCH, LTC and EOS

Most crypto investors and enthusiasts are always looking for the best opportunity to scoop some altcoins.

However, while it may be tempting to value altcoins versus the US Dollar, such a metric may lead to bad outcomes.

In this piece I will look into the top altcoins and how they’re performing versus Bitcoin. Hopefully, at the end, it will be clear if now is a good time to purchase additional units, given each altcoin price vs BTC.

First things first. As I did mention last week, it’s important to focus on the overall state of the altcoin market.

Hence, a key metric to look into, at either Coinmarketcap, Messari or Trading View, is the total Bitcoin dominance (BTC.D).

Since early 2018, when Bitcoin’s dominance was on the low of around 33%, the world’s leading cryptocurrency has slowly begun to regain its due credit, as investors and traders flee the altcoin market on the burst of the ICO bubble.

After the turmoil that remained throughout 2018 and the altcoin bloodshed of the current year, it seems Bitcoin investors may be looking into diversifying with riskier assets. Looking above, dominance shifted after the high during early September, when BTC.D touched 73%, to around 68%, where it sits now.

Looking at the macro trend, it seems BTC.D has a tendency to grow exponentially fast and then spill over altcoins.

If the trend continues, I argue altcoins are in for a treat. We could expect BTC dominance to eventually touch the support line (pink), perhaps after the halving event happening sometime in May 2020. This means some altcoins could have a serious pump.

Looking at the real top-10 list of altcoins, when measured versus Bitcoin, there seem to be some interesting surprises.

I will ignore the coins I’ve discussed last week, such as ChainLink, Stellar and Binance coin. On this piece I will mainly focus on the rest of the pack.

The first, and most obvious, is Ethereum. Looking above, it’s the most liquid after Bitcoin and has been out-performing the BTC over the last three months. However, ETH is still quite below it’s all-time-high (ATM), both in BTC and USD. Looking at the past year alone, ETH has underperformed BTC at some 30%.

Moreover, in dollar terms, ETH is still 80% below its ATM.

Ripple’s XRP has mostly suffered the same fate. It is down close to 50% since last year in Bitcoin terms and over 90% in dollar terms since its ATM, in early 2018. XRP has been recovering and, during the past three months, it went up more than 30% in BTC terms. Quite a nice recovery for the cryptocurrency.

Bitcoin Cash, the project led by Roger Ver – an awesome guy I was able to talk to early this year – has been the worst performer of the pack.

Even though it has been having loads of new commits, BCH hasn’t been able to push higher. It’s still sitting 60% below since last year in BTC terms and hasn’t been improving recently.

Finally, both Litecoin (LTC) and EOS have been making shy attempts at pushing higher. While LTC is still down more than 20% since last year’s highs, EOS is above 55%. After the LTC halving event, which took place a month ago, the coin saw a huge pump followed by a massive dump.

EOS has also been facing some issues with block producers, which may explain some of the recent price-action.

Will altcoins ever pump? 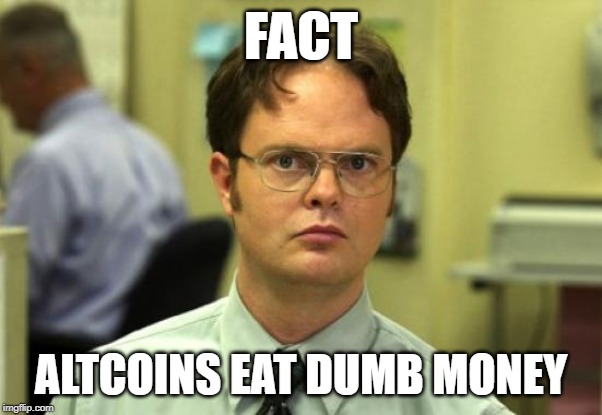 Even though it is impossible to see the future, if history has taught us anything, it is that present moments have a tendency to rhyme with the past.

With new, fresh cash coming into the market, let it be due to DeFi, IEOs, STOs, or whatever new trend may happen, what I expect is a selected number of altcoins to massively pump, as they get adopted by new investors and traders.

Surely history does not repeat itself, but since altcoins are a thing, they’ve pumped massively on every Bitcoin bull-run.

Why wouldn’t the same happen again? Beats me.

Hence, my stance is that some level of portfolio diversification may be the smart thing to do, in order to increase potential gains.

Never forget, altcoins are not the king. On the best case scenario, most crypto enthusiasts will surf the altcoin trend in order to maximize Bitcoin gains.

Casbaneiro is a threat to cryptocurrency in Latin America