DOMINIC FRISBY: "Trend-following helps you stay on board and catch the large part of any move, whether it is up or down"

Today I want to outline a very simple trend-following strategy for you.

Trend-following as an investment strategy divides opinion. I’ve found it to be extremely effective over the years, but I recognise that it only works in markets that are trending. Markets often go through extensive periods where they don’t actually go anywhere – they range-trade – and trend-following can actually lose you money in these environments. You get false buy and sell signals and you get whipsawed out the markets.

However, when a market is trending in one direction – whether it is up or down – trend-following can be a good strategy. The whole HODL meme was basically trend-following. In a bull market, there is no better strategy than buy and hold. The colossal bull market of 2016 and 2017 defied all expectation, and those that played it best were those that HODLed.

However, to buy and hold in a bear market is fatal. You want to sell and hold. Those that sold early in 2017 will be glad they did now. Those that HODLed will be less convinced about the meme.

One famous example of trend-following, by the way, is turtle trading. This was a strategy employed by two legendary commodities traders of the 1970s and 1980s, Richard Dennis and William Eckhardt. Dennis had turned an initial stake of less than $5,000 into more than $100 million. He believed anyone could be taught to trade the futures markets, while his partner, Eckhardt, thought Dennis had a special gift. They set up an experiment to settle the debate.

Dennis would find a group of people to teach his rules to, and then have them trade with his own money. He was so convinced he was right, he was prepared to risk his own money. The training lasted just two weeks. He called his students “turtles” after turtle farms he had visited on holiday: just as the farms produced turtles, so he thought he could produce traders. Their story would eventually become the basis for the film Trading Places.

Another great trend-follower was the legendary investor Jesse Livermore. “It never was my thinking that made the big money for me,” he said.

“It always was my sitting. Got that? My sitting tight! It is no trick at all to be right on the market. You always find lots of early bulls in bull markets and early bears in bear markets. I’ve known many men who were right at exactly the right time, and began buying or selling stocks when prices were at the very level which should show the greatest profit. And their experience invariably matched mine – that is, they made no real money out of it. Men who can both be right and sit tight are uncommon.”

Trend-following helps you stay on board and catch the large part of any move, whether it is up or down. Crypto is a bipolar market – the world either loves it or hates it – so you tend to get fairly good trends in both directions. 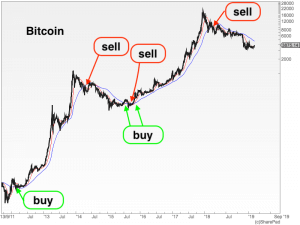 2015 was an annoying year. There was a buy signal in June. Bitcoin was at $300. We got a sell signal in early October with Bitcoin at $250. So we lost $50. We then got another buy signal that same month with Bitcoin at $380. This would have been a hard pill to swallow. But if you followed the system, you got on board one of the most epic bull markets in history.

Today we remain on a sell signal.

This is an extremely long-term strategy I have identified here. If you want something a bit more racy, then use daily moving averages.

What would happen if JP Morgan's 'permissioned' blockchain was hacked?