TRON Back in the Spotlight After Post-Terra Jump. Here’s What’s Changed for the Protocol

Since the fall in the crypto market in May, TRON has performed extremely well compared to other chains.

Its market share of total TVL (among all chains) nearly quadrupled from 2% on January 1 to 6% on June 30. For reference, the next highest jump was BSC, which increased from 7% to 8%, while some, like Solana and Polygon, declined.

TRON now has the 3rd highest TVL after Ethereum and BSC, but not nearly the same amount of excitement surrounding it as Solana or Avalanche. 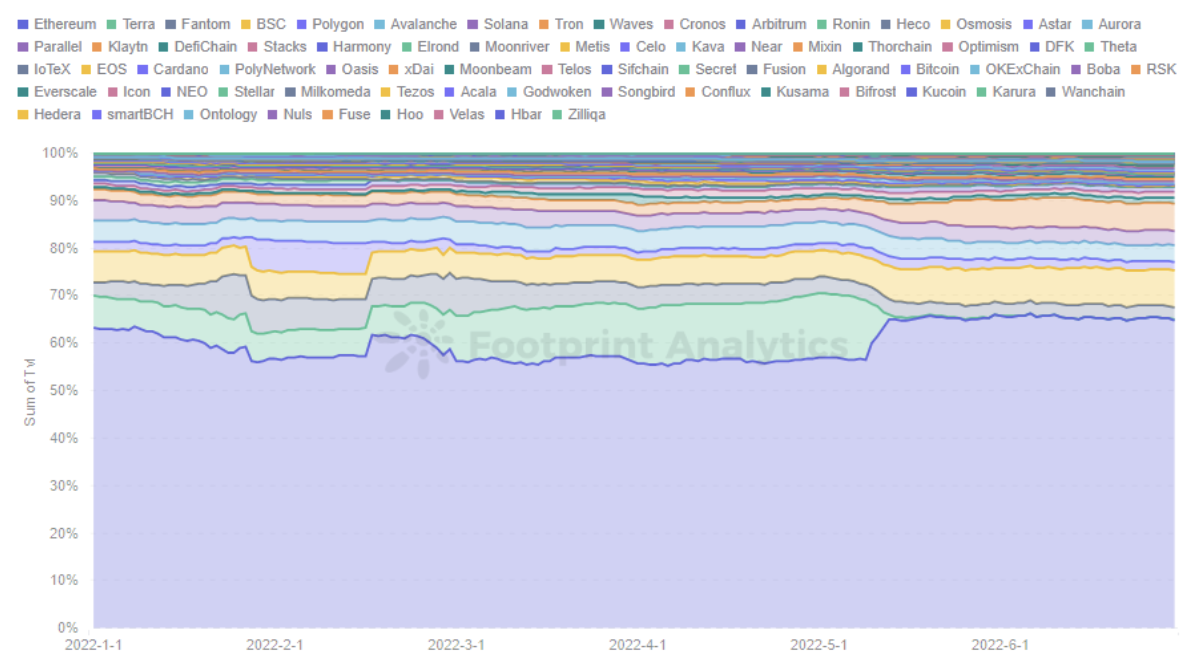 The chain was launched in 2017 by Justin Sun as a potential Ethereum-killer. While it failed to live up to its initial hype and has a small project ecosystem compared to almost all other major chains, it survived one bear market and now seems to be having a resurgence.

We can attribute much of the influx of money and users to people fleeing Terra and UST for TRON’s USDD. The question is “Why?”

Although TRON has the advantage of the low transaction fees for stablecoins, how promising is the ecosystem in terms of future health? Can its stablecoin, which has been struggling to hold a peg, avoid a UST-like collapse?

We’ll look at on-chain data to try to understand the underlying drivers behind the spike of investors moving to TRON compared to other, more popular, chains.

The reason for Tron’s surge

According to Footprint Analytics, there are only seven DeFi projects on TRON, 5 DEXes, one lending platform and one stablecoin platform. Compared to the rich ecosystem on other chains, TRON doesn’t offer users much. It doesn’t even crack the Top 11 chains by number of protocols.

However, when we look at the cause of the recent rise in market share, things start to make sense. The increase was closely tied to people moving from UST to USDD.

One explanation is that, like Terra Luna used to, TRON offers the promise of a seriously high algorithmic stablecoin yield. Likewise, investors will either make a lot over the course of a year, or lose their money only if TRON, like Terra, collapses taking USDD with it. The parallels between the two projects mean those seeking to replace the UST allocation of their portfolio into a similar project would naturally gravitate to TRON.

On TRON’s website, we can see that the risk-free yield for USDD and USDT is as high as 45.6%, a rate provided by SUN.io. SUN.io is a stablecoin platform that offers lending, swapping and governance.

If the rise in TRON was mainly caused by Terra investors seeking to replace one high-yield, risky algo allocation with another, we would expect SUN.io to specifically see a spike in TVL. Of course, the leading protocols like JustStables and JustLend also offer high APY, but Sun.io is the most degen. The data supports this hypothesis.

Clearly, many investors see TRON as something of a Terra replacement thanks to low stablecoin transaction costs and high yield. Will it also be the next major chain to collapse?

USDD has been off-anchor since the 13th.

USDD, the algorithmic stablecoin launched by TRON on May 5, 2022, has a mechanism very similar to Terra’s UST. USDD is also minted by burning $1 worth of TRX for a USDD, the main ecosystem token.

The biggest difference between USDD and UST is that USDD’s minting and burning is performed by the TRON DAO Reserve and whitelisted institutions. This gives the project human-controlled safeguards to counteract attacks, but also makes USDD appear centralized.

USDD has surpassed $700 million in market cap in a month’s time and is already ranked 8th among stablecoins. But USDD has the same risk of de-anchoring as UST when extreme downside conditions occur. 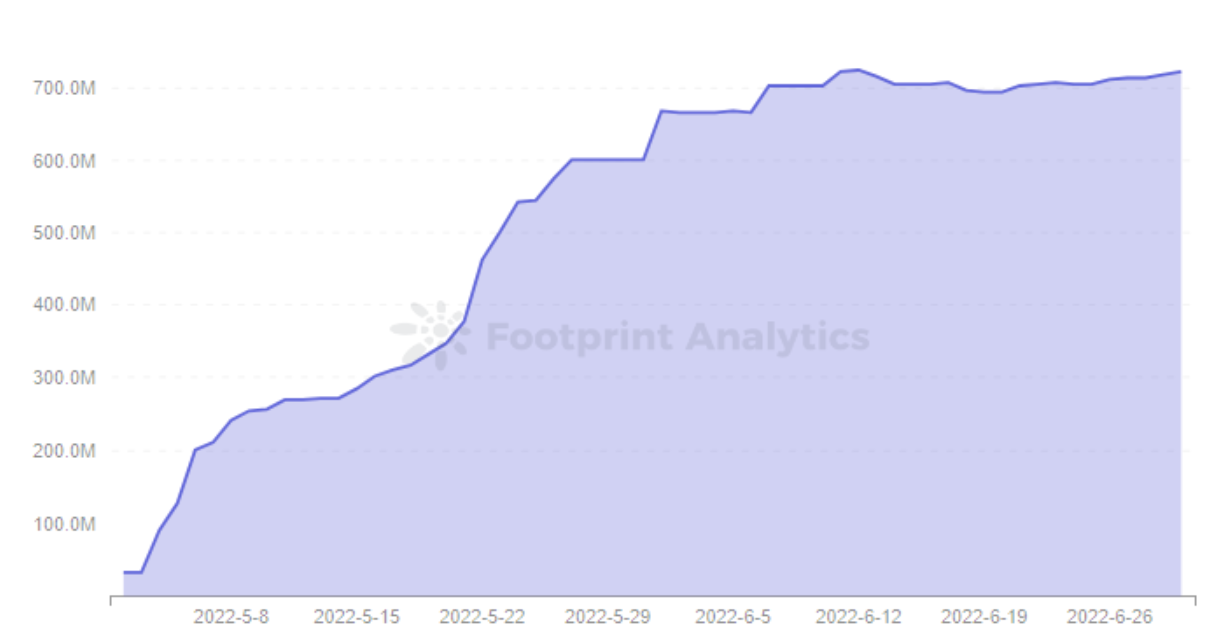 The crypto world is one place history doesn’t repeat, but rhymes.

The collapse of Terra Luna caught everyone off guard, but it may have been preventable in hindsight. UST was so vulnerable to attack precisely because nobody expected it could be sunk—hubris hurts.

But the shock of it all also means that projects are preventative measures to avoid a similar story, especially the projects most similar to Terra.

After seeing what happened with UST, TRON has made significant changes to the USDD model, turning it from an algo to an over-collateralized stablecoin. USDD is secured by multiple stablecoins, including TRX, BTC, USDC, USDT, and sets the collateral ratio at a minimum of 130%. It’s currently at 324%.

Even so, USDD has already gone off-anchor since June 13. In Curve’s USDD/3CRV pool, the share of 3CRV fell rapidly, while the number of USDD climbed, indicating that a large number of users were swapping back to 3CRV.

Tron’s founder Justin Sun tweeted, explaining that the USDD’s off-anchoring was due to people shorting TRX at 500% APR on Binance and that the TRON DAO Reserve would fight them with $2 billion.

As recently as June 20, the TRON DAO Reserve purchased 10 million USDD to guarantee the price, but it seems to have had little effect and has instead caused more people to doubt its decentralization.

The rise of TRON is mainly attributed to its stablecoin USDD.

Its high interest rates have made many investors see it as a possible Terra Luna replacement. As recent data from Curve shows, though, it may well have the same level of systemic risk.

The TRON ecosystem has not fundamentally changed and remains empty compared to other major chains. One positive development for the project’s longevity (though those who want decentralization disagree) is the switch from an algorithmic to an over-collateralized stablecoin.

Why Coinbase is looking to expand into the European market