The UK government has announced a Coronavirus bill with measures that are aimed at keeping the population safe, but many have already been questioned on encroaching civil liberties and basic human rights.

The bill brings to the forefront the debate between the power of the State in times of crisis and the rights of the citizens living in a free democratic society.

According to the Political Editor of ITV, Robert Peston, the bill will enable police to “quarantine people with the virus” and hold people who are viewed as a threat to “national security” for longer. Peston finishes by saying this is “wartime stuff”. 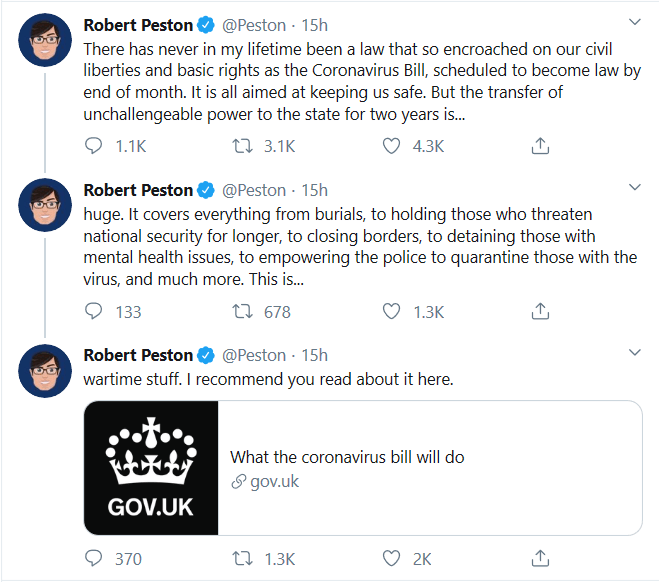 The Coronavirus bill is expected to be law for two years, yet as is common with such sweeping rules, there are fears that these measures can become engrained in society and not removed.

For those involved within the Bitcoin community who typically come from a Libertarian viewpoint, this is the kind of power grab from the State that they warn about. Using a crisis to enact draconian measures.

Yet it can be argued that these are unusual times and therefore extreme and unusual measures are necessary. China was able to handle the crisis through totalitarian measures unacceptable to many western democracies but in doing so have returned now to a society that is edging towards normal life once more.

The British government response so far has placed much of the responsibility on society itself to contain the spread. These measures appear to reverse that trend and give the government much more power to restrict society.

Laws in the time of crisis

Fears are exacerbated by the response of the US government after 9/11. The Patriot Act that followed provided the ability for the NSA and other US government agencies to snoop and gather the data of millions of innocent Americans, as well as citizens from other nations.

There has been plenty of criticism towards those sweeping measures enacted by the US government from many civil liberties groups. The situation exploded into the mainstream after the Snowden revelations, but has since died down once more.

And herein lies the issue for the above Coronavirus bill. Many people will be willing to accept these extreme measures from the government considering the current crisis. However, they can easily be forgotten about as the crisis disappears. Yet the government would still be able to enact these laws without the virus.

Wave Financial Group (Wave) has announced that it has received its first round of investment from clients and has brought 1,000 barrels of Kentucky bourbon whiskey from the Wilderness...

Algorand is now an official blockchain for USD Coin (USDC).  The newly released mainnet implementation of USDC for Algorand is available today, and becomes the second major blockchain after...

Blockchain firm ICONLOOP has teamed up with Korea’s largest job search platform, SaraminHR, to implement a blockchain technology solution in the recruitment and staffing sector in South Korea. Earlier...