US President’s brother was paid $300,000 by missing ‘Cryptoqueen’ Ponzi scammer

The brother of former US President George W Bush has been sensationally implicated in the OneCoin scandal after court documents revealed he had been paid $300,000 to attend a meeting with ‘Cryptoqueen’ Ruja Ignatova.

Businessman Neil Bush met with the 38-year-old head of OneCoin in Hong Kong to outline a deal with a company he was connected with – Hoifu Energy – and Ignatova’s OneCoin.

The 64-year-old Texan’s involvement came to light during the testimony of former attorney Mark Scott who is facing charges of fraud and money laundering as part of the ongoing OneCoin trial in New York. 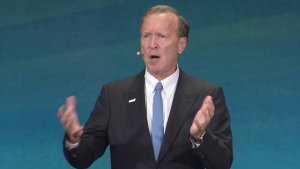 Scott claims he was an innocent party in the Ponzi scheme, and could see nothing wrong with the workings of OneCoin. His lawyer – Arlo Devlin-Brown – sought to legitimise Scott’s naivety by citing the involvement of the son and brother of two former world leaders.

Devlin-Brown argued for a subpoena for Bush in order to testify for his client.

Bush, an active investor, had been part of the board of Hoifu Energu owned by Chinese billionaire Dr Hui Chi Ming.

Hoifu had been looking to seal a loan deal worth $60m to be part-funded by OneCoin – details which were set to be thrashed out during the meeting between the three parties in Hong Kong, for which Bush received $300,000.

This, claimed Devlin-Brown to US District Judge Edgardo Ramos, was enough to give Mark Scott reassurance that OneCoin was a perfectly credible finance company.

Garvin read excerpts from the transcript of an FBI interview with Neil Bush.

Quoting some of the files, Garvin added that Hui had told Bush he would be entitled to 10% of the profits if Hui could secure a deal to sell the cryptocurrency. The files confirmed the deal failed to go ahead.

Neil Bush’s counsel – David Gerger – was then invited to take the stand. While acknowledging that his client was at the meeting, he denied Bush was a member of Hoifu’s board of directors. He also made it quite clear that Neil Bush had no dealings whatsoever with Mark Scott.

“He did not exercise that option and he did not invest,” confirmed Gerger.

“After he attended one meeting, I think he asked a few more questions, and that was it.”

Following a brief deliberation, Judge Ramos ruled Neil Bush’s testimony held no relevance to the case for the defence and, therefore, no subpoena would be required.

“The fact that it was a real transaction or not it seems to me somewhat besides the point,” Judge Ramos ruled.

“So, I don’t see how Mr Bush can add to the relevant elements of Mr Scott’s defence, and at the end of the day, I believe that quashal is appropriate.”

The trial continues next week.