Want to get your hands on free Ethereum? Good luck!

If you search "free Ethereum" online, there are numerous websites offering you the possibility of free crypto. However, when something sounds too good to be true, it usually is

Things that sound too good to be true generally are. Whilst there are a variety of schemes and scams trying to pry your hard-earned money from your hands, they generally rely on a person’s own greed and stupidity.

Want to get some free Ethereum? The chances are that you have little chance of doing so, but there are a variety of offers online. Let’s take a dive into some of the offers of free Ethereum we found online and see what they look like.

The most infamous of Ethereum scams was rampant during the bull run of 2017. Those with major Twitter profiles and millions of followers were the vehicle used to promote this simple idea.

In short, the proponents of this scam aimed to get as much Ethereum from unsuspecting people as possible. To do this, they would create a Twitter profile that would mimic a celebrity such as Elon Musk. Any time the real Elon Musk would tweet, they would tweet directly underneath offering to send you free Ethereum so long as you sent some to that address first. 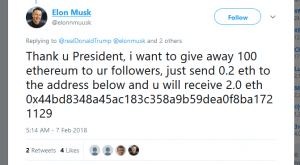 There were numerous people – not only celebrities, but also traders and exchanges – who soon found impersonators under their tweets.

The simplicity of the scam would make it appear as if it had no chance, but people still fell for it anyway. By checking the wallet address, you could see that people were sending Ethereum to the fake profiles in the hope that they would receive free Ethereum back.

Of course, this never happened. Despite many complaints to Twitter support, these scams were able to continue unabashed for many months, leading some to proclaim in their Twitter bio that they were indeed not giving away free Ethereum.

As the market began to suffer, the Ethereum giveaway scam on Twitter slowly died down, but it could make an appearance at any time, and there will be new people to prey on.

Should you search “free Ethereum” on Google, you will see a variety of offers asking you to perform tasks to earn it. Many of these are known as Ethereum faucets, whereby you click on a variety of adverts to earn your Ethereum.

Some of these faucets will use your CPU to mine cryptocurrencies whilst you are on the website. Monero is one cryptocurrency that can be mined using a CPU. Should you use one of these websites, do not expect to earn much. The payouts are minimal and they are a questionable use of your time.

There are similar sites to these Ethereum faucets where you can complete tasks to earn yourself free Ethereum. These include watching videos, filling out a database, or taking surveys. The rate of return for the time and effort put in to these tasks will again be minimal, but it is an option if you have spare time on your hands.

Those that run the sites are generally the winners, making money off of you and not the other way around.

Ethereum is not the only cryptocurrency that is offered for free. There are similar offers for most other major cryptocurrencies, including Bitcoin.

Were you to type “free Ethereum” on YouTube, you will find many videos explaining how it is possible. A lot of these highlight the use of faucets as mentioned above.

Others include the possibility of cloud mining, whereby you contribute money in the hope to receive some in return (which isn’t likely). Advertisements for Ethereum games also make an appearance. Whilst you may receive one or two free spins and win, like any form of gambling, the house always wins in the end.

Should you want to get your hands on Ethereum, the best way would be to either work hard and spend your spare money investing or use some of your savings to purchase the cryptocurrency.

With the variety of scams within the cryptocurrency ecosphere, it is unlikely you will ever manage to get your hands on free Ethereum.

The websites that offer Ethereum in exchange for tasks or through faucets might be free in monetary terms. However, it is not worth the time spent completing these tasks for the rewards gained.

The temptation for free Bitcoin or Ethereum is understandable. With the prices as they are now, you may think they are too expensive to purchase. You could still buy a fraction of either though in the hope that the price will rise.

If the idea of free Ethereum sounds too good to be true, then it most likely is.