Cybersecurity experts have warned a powerful botnet that mines crypto on victims’ networks is spreading quickly.

The Smominru botnet, and variants Hexmen and Mykings, infects hardware and steals its victims’ credentials before installing a Trojan module and a cryptominer which propagates inside the network.

During August, the Smominru botnet infected 90,000 machines around the world, with an infection rate of 4,700 machines per day. Countries with several thousands of infected machines include China, Taiwan, Russia, Brazil, and the US.

As the attacks were untargeted and did not discriminate against industries or targets, the malware reached victims in various sectors. The largest network belongs to a healthcare provider in Italy with a total of 65 infected hosts.

Chillingly, the virus is so sophisticated that many machines were reinfected even after removing Smominru, according to a report by cybersecurity group Guardicore.

Authors Ophir Harpaz and Daniel Goldberg wrote: “When discussing worms, there are no interesting and uninteresting targets – every vulnerable server is under attack.

“Once it gains a foothold, Smominru attempts to move laterally and infect as many machines as possible inside the organisation. Within one month, more than 4,900 networks were infected by the worm. Many of these networks had dozens of internal machines infected.” 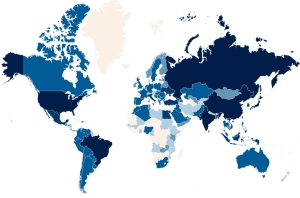 A Smominru infection rate map. The darker the blue, the more infections

The report added: “This suggests that these systems remain unpatched, and therefore vulnerable to this botnet or other similar attackers.

“Since patching is often complicated in large data centers, it is highly important to use additional security controls, such as applying network segmentation and minimising the number of internet-facing servers.”

“Unfortunately, this demonstrates that while many companies spend money on expensive hardware, they are not taking basic security measures, such as patching their running operating system,” the report added.

Why Bitcoin’s bear market will drive price to $3,000

New York regulator aims to give freedom to crypto exchanges

Will the Bitcoin halving spur a bull market?

The highly anticipated Bitcoin halving will take place later this year, with several analysts predicting that it could spur another cryptocurrency bull market. Roughly every four years, or every...

What impact will the Bitcoin halving have on Bitcoin mining?

Bitcoin mining has long ceased to be profitable for the majority of hobbyist miners. So when the upcoming halving in May 2020 slashes the block reward in half, will...

Crypto mining giant Bitmain has amassed the majority of the market share when it comes to fabricating Bitcoin mining rigs. As competition steps up in the space and the...