If you're looking to understand how to maximise your Bitcoin gains, look no further. I will analyse which are the top three altcoins of 2019 to hold versus Bitcoin

At the time of writing, the altcoin market has been slowly recovering from a truly destructive 2018 and half of 2019.

Apart from a few altcoins like Chainlink or Raven Coin, most of the pack has been under performing against the original crypto.

However, as Bitcoin recovers from a bearish summer, I’m confident we’ll see fresh cash entering the market. Especially from altcoins.

In this piece I will look into BTC dominance versus the altcoin market and which are the top three performers of 2019.

Let’s take a look at the charts! 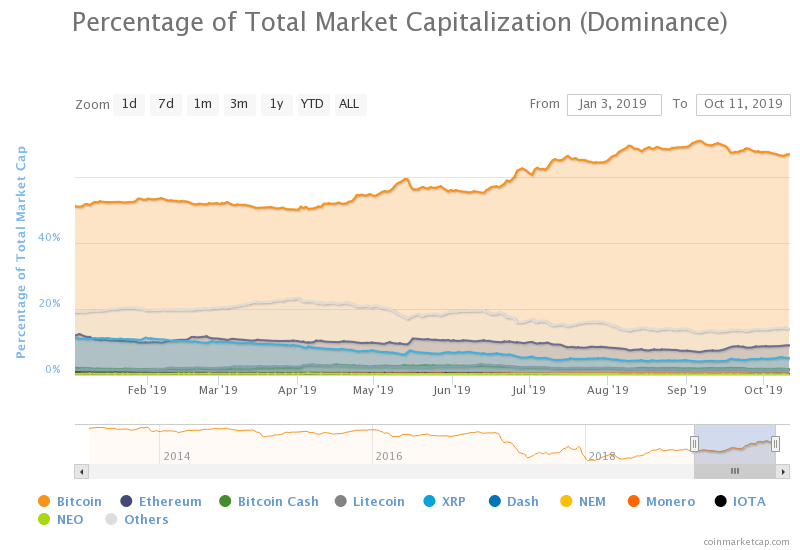 The first and quite obvious statistic that matters is the fact BTC’s dominance over altcoins seems to be stagnating around 65%.

After reaching a 2019 high of around 70% during September 2019, it now seems money is shifting towards specific altcoins.

Since early 2018, when Bitcoin’s dominance was on the low of around 33%, the cryptocurrency has slowly begun to regain its due credit, as investors and traders flee the altcoin market, due to the burst of the ICO bubble.

After the turmoil that remained throughout 2018 and the altcoin bloodshed of the current year, it seems Bitcoin investors may be looking into diversifying with riskier assets.

Surprisingly, some of the altcoins which have gained momentum hadn’t peaked during late 2017, which may be a pretty good indicator these will still see a rise and fall.

Hopefully, due to increased user-base, network effects will help some of these coins to continue to rise in popularity.

Shall we take a look into which have been the winners of the past year?

Febrocas BTC comparison, thanks to Messari.io

Looking at the above table, created in Messari, we can clearly see which altcoins have been the winners throughout 2019.

Let me take a deeper look at each of the individual coins which have outperformed Bitcoin, as they may indicate investor preference in terms of what’s needed for increased cryptocurrency adoption.

#chainlink is going to have a sweet rest of the year, @chainlink nodes are on up and running, and the mainnet is around the corner!! $LINK https://t.co/MkLWYSkzvb

Even though it’s only occupying 14th place in the overall ranking, Chainlink’s LINK has had a massive year.

Firstly, it’s the only cryptocurrency that has been constantly valuing vs Bitcoin, in all time-frames. While it has gained more than 32% on the last seven days, LINK has grown more than 550% during 2019, meaning you could have already 5x your initial investment.

As my colleague Oliver Knight mentioned in this piece, Chainlink even rallied about 950% during two straight months.

In addition, Chainlink had been one of my top picks for the summer. The altcoin did indeed perform massively well since that article was posted over three months ago.

Before I continue towards the next winner, I would like to give a shout out to Chico Crypto for being an awesome supporter of the project, diving deep through the noise and being able to find the most interesting resources and metrics. Thanks, bro!

This project, which has been backed by some VCs, is building a decentralised marketplace for data.

In essence, Ocean Protocol is an ecosystem for the data economy and associated services. It provides a tokenised service layer that exposes data, storage and algorithms for consumption with a set of deterministic proofs on availability and integrity that serve as verifiable service agreements. There is staking on services to signal quality, reputation and ward against Sybil Attacks.

Through blockchain technology and its token, Ocean, the protocol connects data providers and consumers, allowing data to be shared while guaranteeing traceability, transparency, and trust for all stakeholders involved. Ocean Protocol is designed to give data owners control over their data assets and prevent them from being locked in to any single marketplace.

Over the past year, OCEAN has valued more than 146%, being the second most valuable asset to hold, to increase your #sats #stack.

Although the coin is experiencing a bearish momentum, due to its low liquidity and real volume, I’m expecting the backers to maintain its price way up high. When the market starts to recover, I believe investors behind Ocean, will continue to push for higher prices by limiting the number of tokens available.

According to the website, Ravencoin is a protocol based on a fork of the Bitcoin code. Ravencoin adds features specifically focused on allowing tokens to be issued on the blockchain.

These tokens can have whatever properties the issue of the token decides. In addition, tokens can be limited in quantity, named and be issued as securities or as collectables. In essence, You can make your own security token within minutes and have it trade worldwide.

The difference between Ravencoin and Bitcoin is on the consensus algorithm.  Ravencoin is essentially ASIC-resistant, meaning it’s harder for a hardware manufacture highly specialised components.

The protocol uses its own cryptocurrency, the RVN token, which facilitates trade within its blockchain.

At the moment, while the coin grew in excess of 5% in the last 24h, looking at its yearly performance, it increased more than 40% versus BTC.

Hopefully these coins will continue to pump, bringing more value and legitimacy to the altcoin market.