What does the future hold for Bitcoin?

DOMINIC FRISBY: "I'm looking for some sideways action followed by a re-test of the lows. Let’s see if I am right or wrong"

With a kind of eerie symmetry, the low for the sector came a year later, almost to the day, on the weekend of December 15th/16th. Bitcoin touched $3,200. The market cap of the sector touched $100bn.

So let’s look at some charts and try and prognosticate. Have we seen the lows? Is the worst over? Are we building cause for the next bull market? These are just some of the questions we discuss.

Let me start with my big picture view.

This is a bear market. Bear markets are horrible. They can go on for years – far longer than anyone suspects. They indiscriminately chew up and spit out anyone who stands in their way. The bigger the mania that preceded it, the more uncompromising the bear that follows. 2017 was a financial mania like no other – probably the biggest any of us will ever see in our lifetimes. There is a lot of purging to be done.

Markets correct through time and through price. An 85% correction from high to low in Bitcoin, price-wise, is probably enough. It could go all the way back to the break-out point at $1,250, which would be a 95% correction. But 85% is enough.

In terms of time, is 15 months enough? I’d say it’s enough in terms of price correction, but not nearly enough to lay the foundations for a new bull market. In other words, we may have seen the lows, but don’t expect any fireworks on the upside. There are still too many people nursing wounds.

Bear markets in commodities can be gruelling affairs that go on for decades. Take something like copper. It takes many years to get new copper supply to market. There isn’t some copper tap you can simply turn on. You’ve got to make a geological discovery, find some investors to risk capital developing the property, if it’s good enough eventually you’ve got to build a mine, which in itself takes many years, millions if not billions in capital and goodness knows how much permitting. Only then does the new copper supply come to market. All the while the world is screaming there isn’t enough copper – and so the price keeps on going up.

By the time a surfeit of new supply gets to market, and the price starts correcting, it is then another huge undertaking turning off the taps. It is an expensive and lengthy process closing down a mine, so the decision only gets taken as a last resort several years into the bear market. By the time the mines have closed down, sentiment is such that few will risk capital on further exploration, and so the stage is slowly set for a shortage of supply further down the road.

Fortunately, this is tech. The bull and bear market cycles are different. They tend to be quicker. That is the nature of the digital versus the analogue economy.

If we take the Nasdaq after the dotcom crash, the magnitude of the correction was about 85% (the same as Bitcoin, which is good). But it took 35 months to get from high to low. In a metal, that might have been a much longer process. Platinum, for example, peaked in 2008, and in 2018 it was still making new lows. 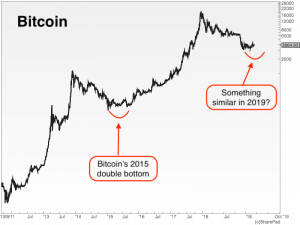 As somebody who has spent far too much of his life staring at price patterns and behaviours, I would say there is a distinct likelihood of something similar occurring in today’s bear market. In other words, Bitcoin has made a low at $3,200. It meanders a bit for a few months (as it now seems to be doing) and then later in the year – perhaps in the autumn or winter – we get a re-test of that $3,200 low.

How the price then reacts to that re-test will tell us a great deal. If it falls through, then the bear market marches onwards and downwards. If, however, it holds, then it’s fair to say we have our low and the bear market has bottomed.

In such a scenario, all my bear market boxes would be ticked.

It’s possible of course we don’t get a double bottom. Every bear market is different. Not all end that way. The Nasdaq made a V bottom in 2003 – it never re-tested the low. Bitcoin could do something similar.

Even though buying the Nasdaq in 2003 – and especially the likes of some of its constituent companies – proved to be one of the greatest investments this century, it is worth also noting that the Nasdaq didn’t actually get above its 2000 highs until late 2016. By that fractal pattern, Bitcoin would not be above $20,000 until late 2033.

I doubt we will have that long to wait. But even so, buying near the end or shortly after the end of a bear market can often prove very rewarding.

So that’s what I am looking for. Some sideways action followed by a re-test of the lows. Let’s see if I am right or wrong. Over to you Mr Market…

As the World Wide Web turns 30, where will cryptocurrency be in 20 years?

The continued divergence away from Bitcoin futures towards Ethereum futures is worth listening to, say analysts from JPMorgan.

Bitcoin ETF could arrive as soon as October

Bitcoin ETFs could potentially arrive by the end of October predicts Mike McGlone, with the possibility to push Bitcoin to $100,000 by the end of the year.