What is the Enterprise Ethereum Alliance (EEA)?

According to the Enterprise Ethereum Alliance (EEA) website, the alliance is a member-driven standards organisation whose charter is to develop open blockchain specifications that drive harmonisation and interoperability for businesses and consumers worldwide.

The EEA’s global community of members is made up of leaders, adopters, innovators, developers, and businesses who collaborate to create an open, decentralised web for the benefit of everyone.

In essence, the EEA is a space for organisations to share knowledge and foster the widespread adoption of the Ethereum protocol among institutional payers.

Some of its founding members are Accenture, EY, the Ethereum Foundation, a conglomerate of banks (including BBVA and Santander), and other key players in various industries.

One of the first documents I looked into when researching the EEA was how the alliance promoted its architecture stack. In my view, it’s key to understand how different cryptocurrency protocols, software, and dApps will communicate with other blockchains and with each other.

You can see the EEA’s proposed architecture stack below courtesy of the alliance’s website.

I personally believe the ultimate goal of the EEA’s stack is to promote the widespread adoption of the Ethereum blockchain by making it more accessible and scalable. 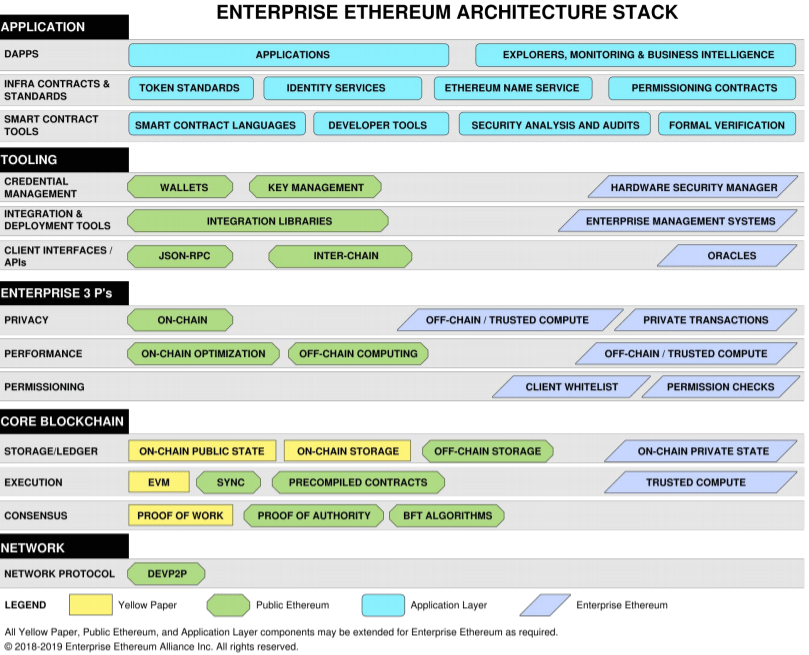 The stack shows that multiple algorithms may be used (PoW, PoA, dBFT, and more) with the goal of increasing the number of both on-chain and off-chain storage solutions to augment speed while maintaining high levels of security. Execution is carried out through either the Ethereum virtual machine (EVM) or through pre-agreed contracts.

Another level up, we see how the enterprises will communicate with the different protocols. It’s possible to add any number of features such as increased centralisation, privacy, or any other permission checks. In essence, the EEA can introduce private blockchain solutions that somehow mimic Ethereum’s functionality.

In the two levels above that, we see both the tools and applications respectively. In short, tools are used by developers to facilitate communication between applications and the blockchain layer, such as wallets or integration libraries. In the application layer, apps like token standards (ERC), identity management, or the Ethereum Name Service (ENS) exist as programs (smart contracts).

There are a number of use cases proposed by the EEA in order to facilitate the adoption of blockchain technology.

The most notable, which can be found on GitHub, are:

With the introduction of preconceived modules to apply the entire development stack, there is an extra incentive for companies to pursue this technology. Not only does it become easier to implement given the multiple proven use cases, organisations also have quality documentation released by EEA members at their disposal.

In short, the Enterprise Ethereum Alliance is bridging the gap between organisations and the applications of public and private blockchain technology.