Why is Bitcoin’s price crashing?

Bitcoin is sliding down a slippery slope having dropped close to 20% in value since last week. Will price recover soon?

At the time of writing, the price of Bitcoin (BTC) is sliding dangerously down a slippery slope.

BTC has dropped close to 20% in value since last week, causing more than $100 million worth of Bitcoin long positions to be liquidated on derivatives exchange BitMEX.

So why is Bitcoin’s price falling so dramatically? By diving deeper into Bitcoin’s hash rate behaviour and taking a look at trends over the last year, I will look to answer questions such as:

First, let’s take a look at the level of interest in BTC over the past year.

The graph above (courtesy of Google Trends) shows the total number of people searching for Bitcoin on Google this year. We can clearly see that general Google searches peaked in July – coincidentally around the time Bitcoin reached its yearly high of $14,000.

This trend matches the trend seen during the late 2017 crypto bull run. Peak interest in Bitcoin from the general population was unsurprisingly when BTC hit $20,000.

How is general interest at the time of writing? It’s near yearly lows – a sign the market has been consolidating for the past few months.

So who has been buying Bitcoin over the last year? Is it retail investors, institutions, individuals, or Bitcoin whales? 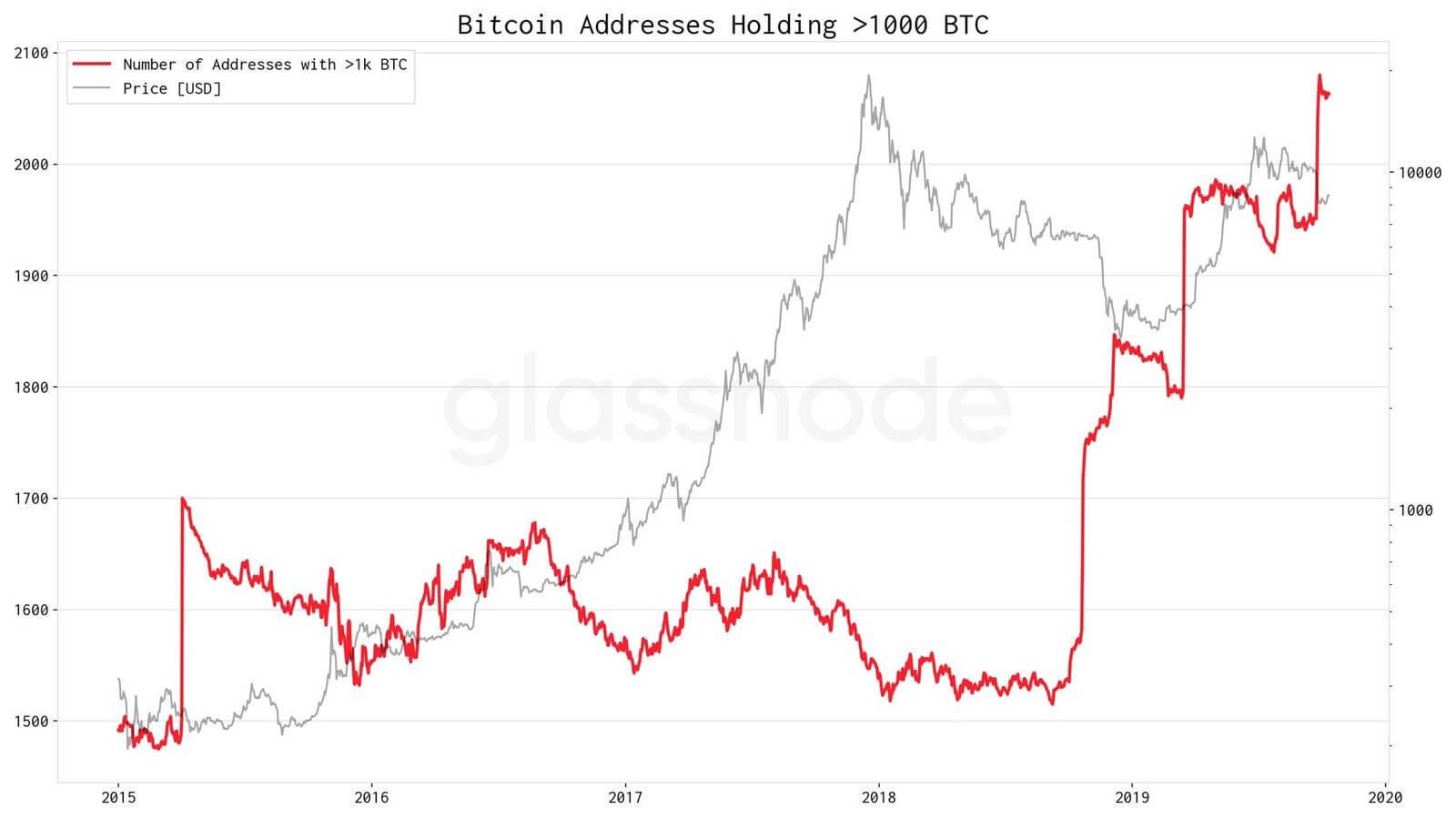 One of the most important drivers for price appreciation, as discussed here, is the number of buyers being higher than the number of sellers.

However, to achieve this outcome, we need large Bitcoin holders to feed the market as price rises. Therefore, one of the key metrics to look into is the number of Bitcoin addresses holding large sums of Bitcoin.

Essentially, the amount of addresses with over 1,000 BTC more than doubled.

Should we assume institutional investors and VCs are betting heavily on the king of cryptocurrencies?

To fully understand this graph (courtesy of Bitinfocharts), we need to take into account what it represents.

Hash rate shows how much electricity is being consumed by miners on average. This metric usually tells us if more miners are coming into the market or if the hardware is improving.

From early 2019 up to last month, Bitcoin’s hash rate had been appreciating. Since no new game-changing ASIC miners (that I know of) have been released, what the above shows is that more people have been mining Bitcoin (or that more hardware has been added to the network).

Essentially, money has poured into Bitcoin mining during 2019. However, price has not continued to appreciate.

What we are seeing now is a minor capitulation of less profitable miners who cannot sustain operations at such low prices.

Bitcoin’s hash rate is already down over 20% from its yearly high.

Is the long-term price expectation that gloomy? Or will BTC rise from the ashes?

Some people panicking about this -17% week.

It's just normal #bitcoin behavior. Note we are still up 2x YTD. And yes, S2F model is just fine, nothing out of the ordinary. https://t.co/eTL0ITnn27 pic.twitter.com/iPAkYGAA4d

If you follow PlanB, one of my favourite cryptocurrency analysts and TA experts, you should already know about his stock-to-flow (SF) price model. In case you don’t, check out this article here.

Essentially, Bitcoin has been following the SF model trend since 2011.

Although there are a few shortcomings, the model takes into account Bitcoin’s halvings and the available supply to calculate an average price over time.

What the SF model shows is that price has never substantially dropped after a halving.